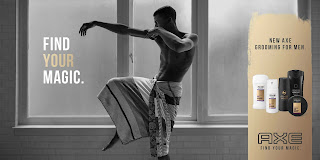 Axe got on the cultural map with ads featuring hyper-masculine stereotypes that either offended and amused depending on whom you asked. They’ve since turned over a new deodorant leaf: their new campaign attempts to broaden the masculinity tent with the “Find Your Magic” campaign.

Adweek likes how the ads “are “all about shedding traditional notions of masculinity and embracing one’s individual sense of how to be a man.” They quote an executive from the ad company as saying, “"With 'Find Your Magic,' we're out to liberate guys from pressure and bull****, and empower them to be the most attractive men they can be—themselves."  If you were watching the Superbowl, you saw Axe liberate men to be their most attractive manly selves by suggesting they do the following:


There is sense in which I agree with the heart of the message. Too often men are marginalized as weak or irrelevant because they don’t match arbitrary and often fickle cultural standards of masculinity. But in the midst of attempting to offer serious social commentary, Axe reveals a significant lack of clarity about their own topic of choice.

First, the ad notes the men are different in all kinds of ways. I’m not sure what follows from that glaringly obvious observation. If I am to take this commercial at face value, apparently what a man is reveals what it means to be a man. That's circular reasoning at its finest.

Let's give the ad the benefit of the doubt and assume it's attempting to say something more profound: whatever a man does is what a man ought to do. Yet this, too, is an irrational conclusion. I can think of lots of things that characterize the lives of men  – abuse, addiction, sexism, racism  – that diminish who they are men and ruin the lives of people around them. They don’t need to be liberated from pressure and expectation in those cases. They need to respond to it and conform to a standard that is higher than their own individual sense of how to be a man.

Third - and perhaps most importantly -  if the men in these ads are not courageous, honest, true, kind, bold, just, generous, pure, and self-controlled, none of their self-empowering, feel-good self-esteem matters. Only two of Axe’s examples (overcoming handicaps and treating women respectfully) even came close to displaying what we would think of as virtuous character traits. We laugh at the preening 6-pack-ab guy because we know looking good on a beach is a far cry from being a man.  But so is wearing a nice suit, dancing boldly, or being good in bed. You could be awesome at all those things and still be a tool.

The people in the ad certainly show what characterizes a variety of men, but they don’t show what makes a man a man in the deepest and most important sense of the word. Where were the men volunteering in soup kitchens, swinging their kids, rescuing people in distress, praying, celebrating anniversaries, building with Habitat for Humanity, volunteering with Big Brother/Big Sister – really, doing anything socially or morally redemptive?

That's where the best and deepest magic happens - in the purposeful expression of virtue. If that characterized men, I think the rest would fall into place.
Posted by Anthony at 3:03 PM