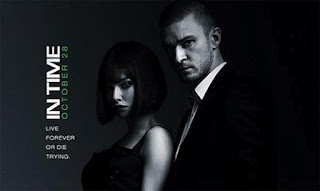 As far as entertaining sci-fi goes, In Time is not bad in spite of some holes in the plot (for example, how is there not an entire industry that keeps track of peoples’ diminishing time and automatically deposits more?). However, I found the underlying worldview issues more interesting.
The movie closes with our heroes, jobless and on the run, getting ready to continue to crash the system.  All will be well (we are to assume) because they are beautiful and love each other.  If only the world’s problems could be solved that easily.
Posted by Anthony at 1:38 PM