Daughter of Smoke and Bone


For those wanting to better understand the stories, worldviews, and messages shaping today's youth, I offer my latest review of trending books, films, and TV shows effecting a YA audience (such as The Hunger Games, Divergent, Graceling, Bitterblue, The Road, The Wolves of Mercy Falls, Spiderman, Project X, and The Walking Dead).  My goal is not to critique the art form as much as to analyze how the story reflects and shapes the readers' worldview. 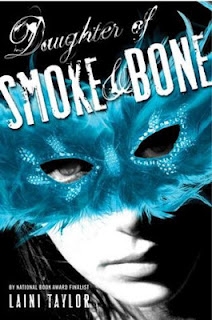 Universal Pictures has already bought the film rights to  Daughter of Smoke and Bone, and no wonder: Laini Taylor's book has received exceptional critical accolades:

Seventeen-year-old Karou has been raised by Brimstone, who happens to be a chimaera - or as the average person would say, a monster.  While her life has been relatively stable, there are some oddities - she has odd tattoos on her hands; she feels that something is not quite right with her and the world; she collects teeth for Brimstone without knowing why. In fact, she leads a very carefully managed double life, going to school with her friends while traveling the world through magical portals that take her anywhere.

She eventually meets Akiva, an angel who plans to destroy these doors ( the “devil’s portals into the human world”) before he destroys the chimera.

Who would have guessed that Karou is a Revenant, a reincarnated version of Akiva's dead lover, Madrigal – who happened to be a chimera? Angelic Romeo met chimeric Juliet once before, and lost her. The good news - Juliet has been resurrected as a chimera/human seventeen-year-old art student.  The bad news - Akiva has already set in motion a plan that will destroy all she loves.

THE DAUGHTER OF SMOKE AND BONE 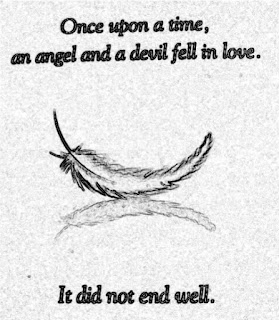 Karou gains our sympathy very quickly. In spite of living in a home with loving authority figures, something was missing: “Of all things in the world, that was her orphan’s craving: love.”  Another character observes of her that thought she is beautiful, she is "wrapped around loneliness…you’re practically hollow.”

This is, I suspect, one reason for the book’s popularity. The world is full of broken families, heartbreaking relationships, and a lot of inner angst, especially for teenage girls.

“She’d been innocent once, a little girl playing with feathers on the floor of the devil’s lair. She wasn’t innocent now, but she didn’t know what to do about it. This was her life: magic and shame and secrets and teeth and a deep , nagging hollow at the center of herself where something was most certainly missing. Karou was plagued by the notion that she wasn’t whole.”

There were certainly reasons for the shame and the secrets. As a sixteen-year-old, she had an affair with Kazimir, a handsome young man who dazzled her with his good looks and charisma.  She had a “glorious place” by his side – until she discovered it had “been a popular place, other girls occupying it when she did not.”

When Kaz shows up as a nude model in her art class, she seizes an opportunity to get some magical revenge.  As he makes a fool of himself in front of the class, she thinks:

“This isn’t just for today. It’s for everything.  For the heartache that still felt like a punch in the gut each time it struck, fresh as new…for the smiling lies and mental images she shouldn’t shake; for the shame of having been so naive. For the way loneliness is worse when you return to it after a reprieve…And this is for the irretrievable. For her virginity… She’d treated her virginity like a trapping of childhood, and then it was gone.”

I wonder how many girls read this and cried? The book does a nice job capturing the regret that follows a relational and sexual betrayal.

As the story progresses, Karou finds out who she is - a Revenant, a resurrected chimera in a human body.  This gives her identity, purpose, and wholeness.  Karou grows stronger, smarter, and more internally grounded. Rather then letting life happening to her, she begins to make life respond to her. A hollow life gives way to a purposeful life loaded with meaning and importance.

Of all the recent YA books I've read, this one tackles the question of identity most directly. Karou does not know who she is, because she does not know where she has come from and where she is going. She know's something is different - but what exactly? Why does she feel hollow; why does she feel like her body was made for something other than what she does? (I found myself humming Switchfoot: "We were meant to live for so much more.") DUALISM

Are humans (and chimera and angles, for that matter) merely biological, or is there something more to us? Zuzana seems fine with thinking of us as "genetic material" (more on this later), but Brimstone disagrees. He tells Karou that her physical body is not the important part of her, and he would know - the "smoke and bone" of the title play vital roles in his resurrection of the spirits of the dead. SEX

When Zuzana first sees Akiva, she says to Karou, “Oh, hell. Must. Mate. Immediately… It’s like a biological imperative, right, to get the best genetic material?  We could use him as breeding stock to seed widow’s peaks into the populace…Mating! Seed!”  A previous conversation described the “butterflies” of first meeting someone as the result of chemicals.

When Karou told Brimstone of Kaz’s betrayal, he gives her the following advice:  “Don’t put anything inessential into yourself…and no inessential penises either... When an essential one comes along, you’ll know…wait for love.“

For Zuzana, romance, love, and sex can be summarized neatly: “Wait for your chemicals to spark your biological imperative." For Brimstone, this summary is slightly different: "Wait for love and avoid inessential penises."

That’s a damaging message to send to all the girls who are thinking of giving their hearts and bodies to beautiful but destructive boys.  Kaz swept Karou off her feet and into his bed, and it ended badly.  Now someone more beautiful is doing the same thing to Karou. What should she do?  Fall for someone more beautiful, believing he’ll be her soul mate this time?

Too many people have tried this method, and it doesn't end well. I have worked with teenagers most of my adult life. I've had too many conversations in which I have helped to pick up the emotional and relational pieces after a teenage girl gave her heart and body away. I've hugged too many single moms when they found out that a couple hours of inessential fun had changed the trajectory of their lives.

Ms. Taylor said in an interview, “If young women could discover and create themselves without concern for boys, it would be wonderful—they can, of course, and do, but budding sexuality is a very powerful force, and goblin fruit is a very powerful temptation!” Indeed. The power is what makes it so volatile.

When sex bring loneliness, tears and revenge, something has gone terribly wrong.  Daughter had the potential to steer us away from the people and the circumstances that get us into that kind of dilemma. It did not.

Brimstone has complete contempt for Christianity, “a castle of fairy tales” that has retold the actual events falsely.  An imaginative re-telling of the traditional story of creation, the fall, and war in heaven is different enough to seem unconnected to Christianity but close enough to feel uncomfortable.


We read this description when Karou fights against a few of the angels: “She: enemy of angels, in her black coat and evil tattoos, with her lashing blue hair and black eyes. They: so golden, the very image of church frescoes come to life. She was the demon in this scene.”  Philip Pullman’s daemons are some of  Ms.Taylor’s favorite fictional creations of all time; it makes sense to have the most demonic be the most heroic.

Based on the interviews I've read, Ms.Taylor appears to be joining her love of  mythology with her desire to write something original in a fantasy genre. While the supernatural religious aspect of Daughter has very little do to with the biblical view, the overlapping language of angels and demons and Brimstone's harsh criticism of Christianity seem to be pointedly subversive rather than accidentally so.

I understand why Daughter is popular. It shows a world where hollow, wounded girls can become strong, fulfilled women. That’s an appealing message. It wrestles with question of identity, connecting with a drifting generation that has little sense of history or destiny (both individual and national). It presents a world where this life, this reality, is not all there is. It doesn’t hurt that a beautiful soul mate awaits.

Yet something is missing. Sure, the story is colorful and quite imaginative, but imagination alone is like Karou - hollow at the center, with something missing. I thought about this book for several weeks after I read it. I went back through and re-read the many sections I underlined. I finally realized why Daughter felt hollow - it's missing ordinary, every day morality.
Daughter offers a healthy perspective on certain issues: genocide and racism are wrong; beauty and ugliness are not synonymous with good and evil; backstabbing and betrayal destroy trust, love, and hope.  I’m glad to see moral clarity there, but I can't overlook the lack of a consistent moral compass in the challenges of ordinary life.
Posted by Anthony at 4:34 AM