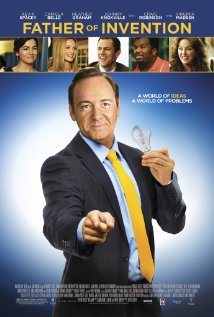 A life in which we are not allowed to fully embrace the entirety of our experiences in not a good life. Pretending that everything is okay when it's not has no happy ending in the real world. Ultimately, the goal is to move beyond anger, despair, grief and resentment, and that can't happen when people aren't allowed to acknowledge the reality of pain, loss, and resentment.

Honesty and confession are hard because they require humility, repentance, empathy, and an acknowledgment that what we do in life matters. Forgiveness is wonderful, but it can only be truly given if the fallout has been truly confronted.

The Father of Invention managed to fabricate his masterpiece by the end of this film: a self-serving worldview in which those who can't easily overlook abandonment and victimization are the problem instead of the ones responsible for the abandonment and abuse. Somewhere, Jerry Sandusky is nodding his head in bitter, lonely agreement.