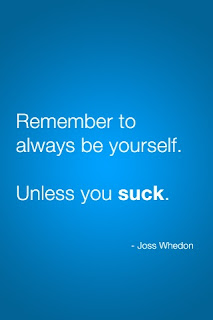 Deception, greed, gossip, exploitation, self-destructiveness and objectification are not beautiful. They're ugly. Maybe those who do these things are kind to puppies and still like Tom Cruise even though he's no Jack Reacher. Fine – that part of their character is beautiful. But none of them - and none of us - are unmarked by the ugly scars of selfishness and sin.

Lady Gaga recently popularized this approach to life in “Born This Way." Her mom (at least in the song) tried to instill a perspective in her from the time she was a kid:


“I'm beautiful in my way, ‘cause God makes no mistakes. I’m on the right track, baby, I was born this way.”

Based on the context of the first verse (and I'm being generous here), I assume mom was trying to teach her that she had worth and value in spite of what life may do to her.  That's a good message. Lady Gaga morphs this into the idea that whatever way she chooses, whatever track she follows, through every possible decision she makes, she’s golden. She will love herself, and she’ll be set. It's just who she is. If we question anything about her – well, our beef is with God.

Funny thing, though - her song's list of those "born this way" does not include a lot of people. She doesn't include rhino poachers, Wall Street swindlers, abortion doctors in Philadelphia with the last name Gosnell, suicide bombers, the Governor from The Walking Dead, or Westboro Baptist picketers. I wonder if she thinks they are on the right track, or if they are beautiful in their way?

We all draw lines somewhere. There always comes a point when even the Lady Gagas of the world  will say, “No. That’s not okay. Don’t be yourself. Be someone different, better, maybe even new." So I kind of liked what Joss Whedon had to say on that first bumper sticker. Sometimes, who we are is not worth celebrating. 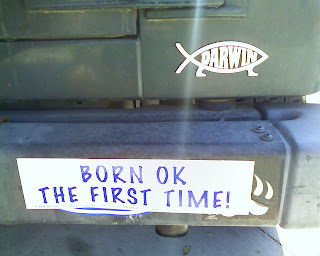 Then I scanned to the right and saw another bumper sticker on the same car: “Born OK The First Time."


Yes, but…. what if you suck? Didn’t we already establish that the first draft of who we are might need some proofreading and revision? Don’t at least some of us (maybe all of us?) need a rebirth?

I get it – the driver was clearly not a fan of Nicodemus.  He could have at least thought more carefully about his contradictory bumper stickers.  The first one says we might not be okay; the second seems to insist that we are.

Ironically, the Christianity he is mocking in the second bumper sticker acknowledges a very important truth about life that was captured so, uh, eloquently in the first – we all are prone to sin. We all suck. (I know that’s not in the King James, but it’s probably in The Message somewhere). There is something inside all of us in desperate need of fixing, and we are not going to be able to do it ourselves. We need a reboot; we need to start over. We need a new identity, a new community, a new life, a new family to help us become the person that we want to be.

We need to be saved from ourselves. As much as I love my parents, I was not born okay the first time. Now, by the grace of God, I can get a new start.  I’m on the right track, baby – I’ve been reborn into The Way.
Posted by Anthony at 5:44 AM