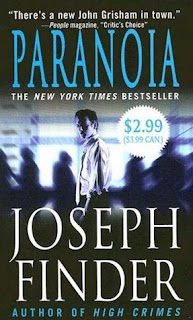 In spite of its flaws, there was an important lesson in Paranoia. Early on, Adam is challenged with the theme of the book:

Adam’s a young man with no passion and no sense of identity. He can't stand who his father was or what he has become, but his father has at least one thing going for him (and I’m cleaning up the dialogue): “At least I know who I am. You don’t know who you are.” Just to clarify the level to which the success bar has been raised: be passionate about something, and know who you are. Sadly, even these vague standards would be a huge accomplishment for Adam at this point in his life.

He continues to hear this message from his mentors in corporate espionage. Goddard complains about “people who move up in life and start changing everything about themselves until you can’t recognize the original anymore.” That's either an ironic comment, or a really sad window into the life of Goddard.  Either way, Adam thinks this applies to him. I'm not sure why. He's doing what he's always done. All that's changed are the stakes.

When Adam eventually locates his conscience, Judith tries to persuade him to stay in the corporate espionage life by citing the value of finding yourself:

“You’re hurt, you’re angry. You feel betrayed, manipulated. You want to retreat into the comforting, secure, protective anger of a small child. It’s totally understandable – we all feel the same way sometimes. But now it’s time to put away childish things. You see, you haven’t fallen into something. You’ve found yourself. It’s all good, Adam.”

It's not all good, of course. Even Adam doesn’t want to find that kind of person when he looks inside. To his credit, he literally walks away from the moral cesspool that is Trion. If there is anything akin to moral growth in his character, it's when he draws this long overdue and pretty vague line in the sand.

This brings us to the final scene in  the book. His girlfriend, Alana, pulls up in her Austin Mini Cooper to give him a ride as he is walking down the road away from Trion. She was part of the espionage, of course. She’d been giving him a ride all along. She had befriended him, slept with him, lived with him, and supposedly fell in love with him, but it was all part of the game.

“God, don’t take it so seriously, Adam!” she complains when he turns down the ride. ”It’s just sex. And business. What’s wrong with that?” As Adam stumbles away, lost and alone but not yet desperate enough to respond to her offer, she tries one last time:

“Oh, come on,” she said, her voice like velvet, suggesting everything, promising nothing. “Will you just get in the car?”

Aaaannnnnnndddd.... fade to black. That was the end of the book. After all the discussion about Adam finding himself and being passionate about something – anything, really, it didn’t even have to be worthwhile – the endings suggests that whichever way he chooses,  he will at least do it knowing who he really is. He may even be passionate about it. And since the line is only in sand, it should be easy to move.

Much like Alana, the book suggested a lot. It could have been a morality tale about deceit and greed. It could have been a warning against materialism and self-absorption. In spite of a lot of unsettling details, the overall story arc set up a pretty good parable about the importance of integrity.

Paranoi ultimately provides very little moral clarity or direction other than "be true to yourself." Alana might represent all that is duplicitous, callous, and destructive, but... she's gorgeous. She wants him. And she has an Austin Mini Cooper. I suspect Adam will just get in the car.