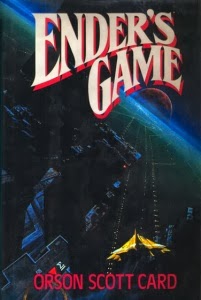 And on and on.  Ender’s Game strikes me as (among many other things) a cautionary tale about the ripple effect of unintended consequences. So many of the characters in the story had justified motives, but their means to achieve their ends brought about pain and destruction in ways they could not have predicted. Ender's Game shows what actually happened vs. what people meant to have happen.

It's the honest, unvarnished legacy of an innocent Xenocide.

So why is this compelling? What is it that has caused this story to achieve such amazing success? I think it's because Ender's Game simply magnifies our lives on an interplanetary scale. So many influences in our life seem bent on corrupting us; so many decisions we make are well-intentioned but flawed; so many of our goals are noble even while our ability to achieve them with integrity betrays us.

Without an understanding of the proper means needed to blend vision with consequence, we manage to constantly do things that do not match our intent.**  The xenocide did not start when Ender pushed the button; it started with the failings of those fighting the war. It started in all too human hearts and minds.

If someone were to speak our death honestly, I suspect we would all provide a story of pain and hope, love and loss, nobility and despair, the desire to do great good even while we inadvertently cause great harm.  If we were known fully, people would applaud the intent of our heart while often cringing at the unintended effect of our hand. We, too, will be remembered for our life as it is, not just as we meant it to be.


Ender is neither hero nor villain. He is manipulated child, hardened slave, brilliant prodigy, fighter for peace, savior of our civilization and destroyer of other worlds. That's why Ender commands our attention. We long for him to rise above a legacy of unintended tragedy. If a killer of worlds can atone for his crimes, maybe a thief, addict or cheater can too.

If even the tragedy of Ender's past can become the soil which nourishes a new and better life, then none of us need to give up hope. Ender's Game is not a story of ultimate salvation, but in it one can hear the echoes of a much greater song of redemption.


** A friend of mine has noted that the Buggers twice attempted to wipe out a race that they were unaware was sentient even though humanity was a space-faring, hi-tech race. The only way the Buggers could have failed to notice was because they were too proud to consider that there were other sentient races out there besides themselves. Furthermore, they had wiped out lifeforms on other planets previously. Perhaps Ender's success ended the life of a genocidal culture. If so, the story is more about justice than it seems.
Posted by Anthony at 5:28 AM