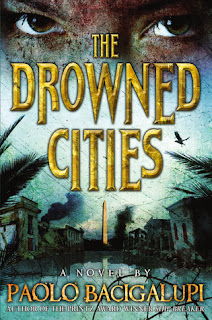 
The story primarily follows Mahlia, a young orphan whose Chinese father left her mother when he moved away with the other peacekeepers. She is now an outcast anticipating a short and violent life. By the time Doctor Mahfouz takes her in to join other orphans in her care, she has already lost a hand to a torturous group of soldiers. She eventually crosses paths with Tool, and genetic monster created by the military for one purpose: killing. And he’s frighteningly good at it. After soldiers kill Dr. Mahfouz and conscript Mouse (another orphan) into their savage army, Mahlia convinces Tool to join her in a rescue attempt of her friend.

Within the framework of this narrative, we meet an insightful spectrum of people and ideologies in a sinking nation trying desperately to stay afloat.

Doctor Mahfouz is an idealistic, world-weary doctor who heals anyone he can. He remains committed to the goal of achieving peace by appealing to the goodness in human nature.  He "liked to say that everyone wanted to be good. They just sometimes needed help finding their way to it.” For him, violence and war is always the problem and never the solution."You caused this," he says to Mahlia after the soldiers invade their town.


“Violence feeding violence. I’ve told you again and again and again, but still you never listen. You loose coywolves on soldiers and now the soldiers burn Banyan Town. Tit for tat until the whole world dies.”

Tool is a living war machine pieced together in a lab from parts both animal and human.  He tears through forests and towns like a primal force of nature, killing because it's in his nature. Mercy and peace?  Not gonna happen. Tool was created to win, and win he does.  People think he is a monster, but Tool’s not so sure. When Mouse asks him to spare his life, Tool muses:

If the good doctor embodies hope in the goodness of human nature, Tool embodies cynicism. Studied in the Sun Tzu’s Art of War, he knows when to fight and when to run. He is smart, ruthless, and remorseless. You want him on your side. Maybe.

Mahlia and Mouse are war orphans adopted by Dr. Mahfouz. They have seen enough of war to know the score:


“When the dogs of war came howling down on you, you didn’t stand tall; you ran. That was Sun Tzu. If your enemy was strong, you avoided him. Which seemed pretty damn obvious to Mahalia and Mouse. But these people had stood tall anyway. So they’d been shot and macheted to pieces. They’d been lit on fire and burned by acid.”

“Safe? The word made Mahlia want to laugh. Running didn’t make her safe. It never had, and now she was realizing it never would. She had been as stupid as her father, who had thought the peacekeepers could never be beaten, and her mother, who had thought that a soldier from a foreign country really loved her instead of her valuable antiques, and Doctor Mahfouz, who thought that there was good in the world.”

When the soldiers kill the doctor and capture Mouse, Mahlia is hiding with Tool in the cover of the woods, declining to join a battle they couldn't win. They lived to fight another day, but surviving meant "you ended up with the ghosts of everyone you’d ever left behind riding on your shoulders.”

Mahlia is a survivor with soul. She longs to stop the tragedy erupting around her, but in order to survive she is forced at times to become a part of the same world that has threatened to drown her in more ways than one. Mr. Bacigalupi noted in an excellent interview with tor.com:

The Drowned Cities is a place where people are continually being torn apart, but Mahlia doesn’t break. She forges her own path through the horrors, and is continually trying to balance her survival against her ethics, but at root, she’s the one making her choices and accepting the consequences.

Ocho is a soldier boy, hardened by a few short years of horror. He and his comrades brutally turn Mouse into one of their own. In their world, bodies are expendable, life is cheap, and the most one can hope for is a quick and honorable death. When he eventually captures Mahlia during her rescue attempt of Mouse, he sees a loyalty and love the remind him there is still goodness in the world. It's a bittersweet memory.


“She’d come all the way into the Drowned Cities, to get her boy back. Mouse, she’d called him. She’d come all the way in. And it made Ocho want to shoot her right then and there... No one had ever come for him. They’d blown into trouble, him and his uncle. And not his mom, not his dad, not his brother, not a dozen people who he’d called his friends back in town on the coast, not a one of them had ever come looking for him, trying to get him back. They’d just let him go. That was the difference.”

There’s a great scene near the end in which all of these war-torn villains and heroes converge. The UPF has captured and tortured the Mouse and Mahlia in an effort to coerce Tool into fighting for them. As the stakes climb, the clarity of moral vision becomes even more cloudy. The way in which the UPF goes about achieving its end goals are horrible, but their cause is almost just.


“With your help, the war ends, and the children go back to innocence and toys. What say you? I offer you a honorable fight, and a rank that befits your considerable skill, and your friend lives in safety. With me, you are no longer a fugitive, but the commander of an army. What say you to that?”

“Ask him if he wants to give me back my fingers, too,” she slurred. “As long as he’s making promises, ask him if he’s got my fingers.”

Can ignoble horrors sometimes serve noble ends? Can the brutal violence that tortures and coerces be the vehicle that brings peace and freedom to the Drowned Cities?  The payoff hardly seems worth it, but what if it's a the only solution?  It’s in this moment that Mahlia understands the doctor’s passion for peace:


“Finally, she thought she understood Doctor Mahfouz and his blind rush to the village. He wasn’t trying to change them. He wasn’t trying to save anyone. He was just trying to not be part of the sickness… She thought she’d been surviving. She thought that she’d been fighting for herself. But all she’d done was create more killing, and in the end it had all led to this moment, where they bargained with a demon of the Drowned Cities not for lives, but for their souls.”

Mahlia, Ocho and a few others eventually break free of the Cities and sail to a waiting fleet of traders who can offer solace and freedom. As they near, Ocho begins to wonder if anyone can possibly accept him after the terrible things he has done.


“You think they’ll take us.. I mean…” He touched his cheek and his brand. “They’ll know what we did, right? They’ll know who we are.” Mahlia looked at him. The part that was other than a soldier. Some parts of whatever the sergeant had been, before the Drowned Cities had swallowed him up. The scared kid who’d been beaten and whipped and shoved around so long he’d almost lost every bit of his humanity. He was right there. A whole other person, trying to believe.”

Before writing The Drowned Cities, Mr Bacigalupi researched the actual, historical records of the involvement of children in wars. I commend Mr. Bacigalupi for offering a story that is honest in its depictions of brutality, moving in its moments of compassion, and insightful in its view of human nature. The Drowned Cities is compelling, thought-provoking, and in need of being read more than once.