It seems clear that the battle to think carefully and reasonably is being lost. Oh, don't worry - I'm not here to gripe! Rather than bemoan the loss of our ability to think with clarity and depth, we should embrace the new way of forming opinions quickly and painlessly: MemeThink! 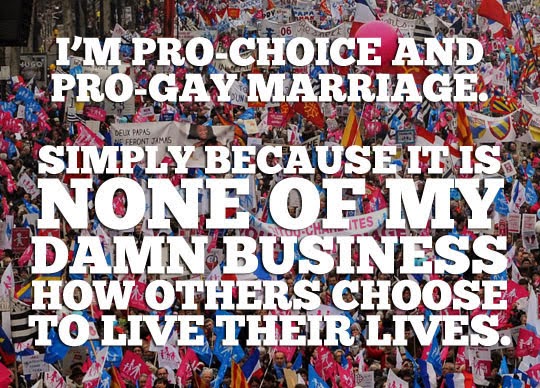 As a template for how to frolic in the shallow end of the intellectual pool, I offer for your consideration the meme I encountered online last week. It provides a great example for how to engage serious subjects by building an argument that does not require any heavy lifting on your part. You, too, can change the world one fallacy at a time! So with no further ado, here's some advice for how to flourish in our brave new intellectual(ish) world.

1) Swear. It's a simple way to challenge stuffy prudishness. If someone can't see how cool and edgy it is to be vulgar in even the most ordinary of conversations, you probably don't want them to be part of the discussion.

It's also a great way to show how much you have invested in the topic. If you don't swear, how will anyone know you really mean it? Why settle for, "It's none of my business!" when "It's none of my damn business!" is available? Don't worry if the language makes no sense in the sentence (why is your business damned, anyway?); nobody who reposts it will notice, and it gives permission for all the sycophants to swear as they talk about your meme. Next thing you know, people who disagree will bail from the conversation as they tire of the juvenile language, and …. boom! You and your friends can mix the Kool-Aid without the threat of civil discourse threatening to rob you of your basic vocabulary.

2) Don't bring up any issues that undermine your claim. For example, you could say, "I'm pro-sweatshop labor!" or "I'm pro-Sterling!" or even "I'm pro-people who refuse to photograph same-sex weddings!" because it's none of your damn business what other people do!  But readers with even marginal intelligence might realize that your claim doesn't actually work for them all the time. Strangely, most people do actually care about how people live their lives in certain situations - they just draw the line at different places. Don't let this moral and logical dilemma dissuade you: most people will just re-post your meme without thinking, so you should be safe.

3) Ignore the hypocrisy of the statement. Let's be honest: claims like this are a logical disaster. Really, this meme should read, "I'm pro-choice and pro-life, pro -gay marriage and pro-traditional marriage, because it is none of my damn business how others choose to live their lives. So they can do what they want and think what they want, and I don't care at all!" See how tricky that is? If you really mean it, you won't write the meme. It's called a self-defeating argument. Once again, don't worry: most people won't catch that freshman level fallacy in our logic. Heck, most of them have never studied logic. They will just click "share" and think they posted something profound.

4) If anybody disagrees, just insult them. You're in a tough spot: if you respond to a critic, then you apparently do care about what other people think and do, or you wouldn't bother to respond. If you don't respond to critics, people might think you don't know what you're talking about. So if anyone challenges you, call them names. I know bullying is not really popular right now, but in this case it's your best resort. If the authors of the meme referenced in this post had thought ahead (I know; that's hard!) they could have included pro-bullying as part of their platform. That would have allowed them to be as mean as they wanted to be!

5) Don't ever, ever take the argument seriously. Sure, the author of this meme could have addressed the moral, religious, philosophical and medical arguments that claim the unborn is human and deserving of rights. The author could have addressed serious arguments about the nature of human sexuality, the implications of redefining marriage, and whether or not kids have any rights in the discussion. But…good grief, that would require a lot of studying, listening and thinking. Who has time for that?

Well, I think I've primed you for success. If you can follow these five steps, you can gain a following of reposting drones while helping to undermine our collective ability to think deeply and seriously about, well, anything! I'm not saying it will be easy… Wait. Actually, it will be.

This is the way all those uncomfortable, thought-provoking conversations can end: Not with a bang, but a whimper. You may have to look that up, but I doubt you will.