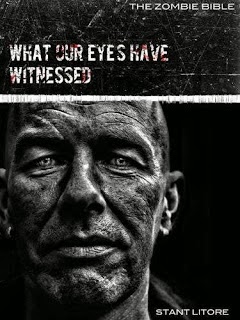 Stant Litore takes both zombies and the Bible seriously. He writes, “My first real encounter with the stories of the Old Testament occurred when I was a second-grader. Someone at school gave me a Bible and I took it home and (because I was an insanely fast reader) I plowed through Genesis before going to sleep that night. Those stories were compelling; they had me riveted. And they had me asking all kinds of questions. I wanted my readers to have that experience.”


He wrote more about the Bible in a blog post entitled “Stant Litore on the Bible: How and Why IRead It.” I don't normally quote this much, but I think establishing his intent is important.

“This record opens with two ethical statements in Genesis 1:

The thousand-odd pages that follow consist of 66 books (slightly fewer, slightly more, depending on which Bible) that debate these two ethical propositions (and others), across three continents (Asia, Africa, and Europe), three languages (Hebrew, Aramaic, and Greek), and nearly a millennium of writing. You have a collection of legal texts, historical chronicles, poems, sermons, letters, testimonies, hagiographies, collections of proverbs, and dream-stories that wrestle with what these ethical statements mean, what these statements imply about God or about people, and whether/how/in what ways these statements might be lived and practiced in real life...”

One way to read significant passages in the Old Testament is to read them as dozens of different views of how the Hebrews struggled with two directions that often appeared contradictory: Shelter the stranger on the one hand; on the other, keep your own people safe and secure as well as separate and sacred as a “chosen people.” An ethical conflict that we get to watch in action...

In some accounts, the view that is privileged is “shelter the stranger.” In others, the view that is privileged is reject the stranger — violently, if need be. In the New Testament (in Galatians), Paul says that there is no Greek, no Hebrew, no male, no female, no master, no slave in God’s sight. In other words, race, gender, and class are seen as arbitrary and manmade distinctions. But then Paul has to wrestle with how to make this practical. What if a Christian woman has married a man who worships the old gods? What then? He wrestles with the issue, indicating what he thinks is right, and concludes with the direction that his readers must search their own hearts.

They must wrestle with it.

As readers, these stories, poems, and letters invite us into the wrestling match. Because make no mistake, we have to ask the very same questions that were asked thousands of years ago. Are we to shelter the stranger? How does this impact our views on immigration? How does it effect what we do when our child brings home someone of another race for dinner? “Who is my neighbor?” one listener asks Jesus, and gets a very uncomfortable story in response. Who am I responsible for loving and sheltering?

You can take any number of ethical statements proposed in the Bible, and watch it get wrestled with, generation after generation, story after story, letter after letter. The Bible is not a consistent plotline or a manual; it’s a record of centuries of intense wrestling and it is an invitation for us to wrestle — openly, honestly — with these ideas. Ideas that have shaped and troubled our world. Ideas that are radical and important.”

Mr. Litore has written in multiple blog posts that his goal is to let readers take a fresh look at biblical stories and experience their beauty, horror and depth in a new way. He cites Tolkein and Chesterton’s perspective of art as a type of “recovery” that brings a freshness to experiences that have begun to feel ordinary. He quotes one of Chesterton's observations in Orthodoxy: ““Fairy tales say that apples were golden only to refresh the forgotten moment when we found that they were green.” 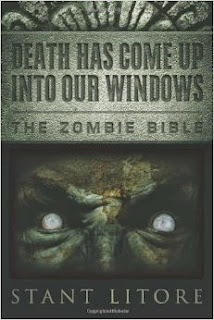 Mr. Litore tries to accomplish this by throwing in a plot device that shocks, engages, and forces us to wrestle once again with stories that should never have lost their importance. Risky? You bet. Effective? That’s up to individual readers, but I found his writing compelling.

What Our Eyes Have Witnessed tells the story of Polycarp's martyrdom; Death Has Come Up Into Our Windows tells an episode from the life of Jeremiah (the title is taken from Jeremiah 9:21). Keep in mind that Mr. Litore is not trying to rewrite the Bible or early church history. Based on his blog posts, he seems to have a deep respect for the Bible. He loves the power and passion of the stories and is well versed in both the Old and New Testament. (Referring to God as “she” in Death Has Come Up Into Our Windows strikes me as a conscious attempt to make sure his readers are not mistaken about what he is trying to do).

If you are looking for books that will simply add shock value to biblical or historical events, you will be disappointed. They are violent, yes, but they are not books written to satisfy a purile need for gratuitous gore; these are books that attempt to “recover” stories that should never have lost their power. As I read both the books and Mr. Litore’s blog, I was reminded of o Flannery O'Conner’s insights in "Some Aspects of the Grotesque in Southern Fiction":

“In these grotesque works, we find that the writer has made alive some experience which we are not accustomed to observe every day, or which the ordinary man may never experience in his ordinary life. We find that connections which we would expect in the customary kind of realism have been ignored, that there are strange skips and gaps which anyone trying to describe manners and customs would certainly not have left. Yet the characters have an inner coherence, if not always a coherence to their social framework. Their fictional qualities lean away from typical social patterns, toward mystery and the unexpected. It is this kind of realism that I want to consider.”

The Zombie Bible series invites you into the mysterious and unexpected so you can once again wrestle with the profound reality of evil, good, despair and hope. He writes stories of "the hungers that devour us and the hopes that preserve us." That can be seen clearly in his writing. The zombies don’t distract; they magnify human selfishness and greed, the insatiable desire to take instead of give, to consume others instead of nourish them, to spread death instead of life. By contrast, the light of goodness and the hope of salvation shine even more brightly.

Rather the explaining how the plots unfold  in the two books I read (they track pretty closely with the original sources), I will simply offer a few typical quotes for your consideration.

From What Our Eyes Have Witnessed

This world was one of hunger, filled with those who would devour you—both among the dead and among the living.… Like a violent fever, the hunger eats away mind and spirit. In the end, everything that we truly are is gone. Only the hunger remains. Even other men and women are no longer anything but food to us, meat for our desires and obsessions. Then we are lost— unless some other brings a Gift. We cannot recover ourselves alone.”

“You intend to put me to death,” Polycarp continued. “This seems certain to me. But it will do you no good, Caius, and even if you succeeded in suppressing the teaching and the sharing of bread, it would only do Rome harm. But you will not succeed, for it will not end with me. You have the wrong man.” Polycarp smiled wearily. The praetor bristled at the man’s bravado, his arrogance, but kept his emotions under tight control. “Who is the man I need to execute, then?” “He is not here. Though he is, I trust, in all places.”

We are all slaves here, young Marcus. Slaves of the One God who wishes to repair a broken city and bring peace to the living and the dead. He has bought us, we are his.

Take pride in your sonship. No son of our God need lower his head at the world’s scorn or its bruising. Remember who you are, my son.

Polycarp raised his voice in song, leading them in the PhosHilaron.  It was a hymn to the nearness of God in the day’s last light…

From Death Has Come Up Into Our Windows:

Abraham had taught this to all his children, and they to their children: We do not feed God, God feeds us. God is sufficient to feed herself and us. To honor her, give back some of the food she has given— fruit of the orchard or the first of the flock— but do not give your own young, for that is an abomination before God who brings all births. Now Yirmiyahu gazed down into the foreign god’s dark belly, and his insides became cold. He wondered how many of the People had come to worship here, how many had come to feed the god. Was it easier to covenant with a god you’d fed, one you hoped would owe you gratitude, however cruel that god might be, than it was to covenant with a God who fed you?“

Being covenanted to one woman and to one God taught a man steadiness, the steadiness needed to stand in a strong wind. To have many women or many deities was to be buffeted by winds from many directions; it meant not knowing who one was called upon to protect and worship. It meant being accustomed to a degree of faithlessness, to offering merely a conditional devotion to both God and woman. It meant the ease of distraction, of picking and choosing from one’s responsibilities and relationships, laying down those that were most difficult at a particular moment and devoting more of oneself instead to those that required less work and less truth.”

In a blog post entitled “An Old Story Made Dangerous Again,” Mr. Litore writes, “Biblical stories often shamble through our culture like zombies themselves, all flesh with no spirit; by making the stories strange and new to us again, The Zombie Bible might perform (if it works) a dangerous act of resurrection.”

That's an exemplary goal. So far, Mr. Litore is well on his way to accomplishing it.
Posted by Anthony at 7:08 PM