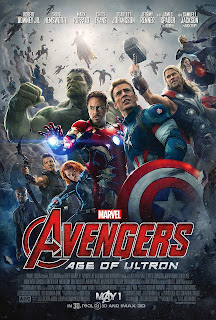 TONY STARK
Tony Stark knows two things very clearly: bad things are coming, and the world is not ready. He has the intelligence and the money to build a “suit of armor around the world,” so why not? He thinks he can save the world; unfortunately, he's actually destroying it by making Ultron possible. The Scarlet Witch points out that neither he nor Ultron can tell the difference.

When Stark sees a vision of the future in which the Avengers are destroyed, his only thought is that he could have saved them. He doesn’t realize that he could just as easily be the one who destroyed them. We aren't supposed to want to be Tony Stark. He’s a cautionary tale of how pride can blind even the most brilliant to the dangers they bring the world. ("Nuclear power? Paging nuclear power.")

CAPTAIN AMERICA
Captain America is the ultimate Bible Belt hero. He loves God and country; he is pure in his actions, unwaveringly noble in his decisions, and uncompromising with his integrity. Unlike Tony and Nick, he will not give up on a city. “The world adjusts, evolves to live with changes,” says Nick. Cap’s not buying it. He’d rather die than be content to let the ends justify the means. However, he’s got a dark side nobody knows about (or so he says in the movie), and his unwillingness to cut his losses may endanger the entire team.

HAWKEYE
In some ways, Hawkeye is like Cap in that they share a similar character and an affinity for secrets. His wife tells him he is part of the team to keep the other supers grounded. She's' probably right. Still, I wonder why it is he can departmentalize his life so efficiently? From ultimate family man to efficient killer almost instantly? Hmmm….

THE HULK
The Hulk can’t escape his dark side. He does not want to be a raging animal; he wants to be Bruce Banner, brilliant scientist and man of peace. Unfortunately, he can’t seem to stop himself even when he puts up every buffer he can between himself and the Big Guy. Until that happens, how is he to know if people genuinely like him or just his alter ego?  Natasha says she loves him but still occasionally needs the "other guy.” When he finally leaves them, you realize it's not just for their sake.

BLACK WIDOW
The Black Widow (who is rapidly becoming a fan favorite, this fan included) is deeply damaged from the brutally efficient training she received when she was younger. In the first Avengers movie, we learned that she is trying to clear her ledger of all the red in it.  We also learned that she is frightened of the world in which she has found herself. At one point she says,  “This is monsters and magic and nothing we were ever trained for.” She is a formerly apex predator who is no longer at the top of heap. In The Winter Solider, we learned that she has be so many different people that she doesn’t know who she really is. Yes, it's a bad way to live, but it's also a great way not to die.

She’s the kind of person who can genuinely care about Bruce Banner, but she will push him off a ledge when she needs The Hulk. Your glad she’s on your team, but even she acknowledges she’s a monster. She doesn’t even try to test her worthiness by picking up Thor’s hammer. That’s not a question she needs to have answered.

ULTRON
Ultron seems to be the embodiment of the worst of humanity writ large (the movie makes clear he is a larger version of Tony Stark). At first he posits his desire to protect humanity as the reason he wants to be in control, but he finally drops the façade and admits he wants to destroy them. And why not?

He says to the Avengers, “You want to protect the world, but you don't want it to change. You're all puppets, tangled in strings... strings…I’ve got not strings to hold me down." By strings he means that there is no moral code or authority that can tell him what to do.  Some have suggested that he is Neitzsche’s superman, beyond good and evil. All that remains is the Will to Power, and he has plenty of that. That's true, but not precise enough. Ultron’s goal isn’t power for power's sake.  He doesn’t even want to rule the world.  His goal is to allow evolution to take place unhindered by human intervention.

VISION
If Ultron embodies the worst potential of humanity, the Vision embodies the best potential. When the Vision tells Ultron that chaos and order are two sides of the same coin, I suspect he is showing the contrast between the two of them. The Vision understands the value of strings. He is there to stand between the chaos of Ultron and the rest of the world. When the Vision picks up Thor's hammer, there's an implication that he is not only strong but worthy. Thought he talks about the ongoing cycle of evil, he destroys Ultron in the end. Evil and chaos will come around again. It doesn’t mean it cannot be defeated.

At least this time.

Therein lies the problem. The Vision provides a deeply humanistic solution to a deeply troubling humanity. If the blending of humanity and technology (Ultron) can destroy us, why would we believe that the same blend (The Vision) can save us? His consciousness came from Stark by way of Ultron. Even though Jarvis intervenes to stop Ultron’s full influence, Jarvies is Stark’s creation too.

When he first awakens, the Vision responds to a query about who he is by saying, “I Am.” That’s quite a claim considering that the last person recorded as saying that was God. Does the Vision think he is god-like? Is he just incapable of articulating who he is because he is so new? The movie doesn’t make it clear, but considering how the god-like Ultron quoted Jesus (“Upon this rock I will build my church”), it would make sense that Whedon has the god-like Vision also quote the divinity. He is the Flesh made Machine, the ultimate humanist incarnation.

As far as materialistic savior stories go, Avengers offers a great storyline. We see the things that break the world (pride, greed, lies, violence, betrayal, moral chaos, selfishness, unforgiveness) and the things that repair the ruins (humility, loyalty, truth, compassion, altruism, love and peace). Whedon does a solid job getting us to cheer and cringe for the things to which these emotions should be attached. It's points us toward the hope for the world. What it does not do is give us any compelling reason to think that our efforts will get us where we need to go. A different kind of Savior is needed for that.


I walked away with the impression that Age of Ultron was meant to be a story of both the horror and the hope of what we can become. We could become moral relativists, unencumbered by the guiding strings of decency and truth, interested only in what we think is good for everybody else and willing to go to any lengths to achieve it. We see that tension even within the Avengers. Nick Fury likes Black Widow because "she's comfortable with everything." Thor tells Stark that he is playing with things he doesn’t understand, but Stark doesn’t care. “Should I?” is not as important to him as “Can I?” Whenever you see a character without strings, it never ends well.

And yet there is the hope that the worst of times will bring out the hero in us. Cap and Hawkeye ask “Should I?” and do what ought to be done even at the risk of their own lives. Quicksilver and the Scarlet Witch eventually see Ultron for what he is and very purposefully begin to fight for good in spite of some profound hurdles to overcome. It is within the boundaries of noble purpose and the directing strings of moral goodness that humans flourish, whether they are super or not. Whedon once told Entertainment Weekly,


"If I wrote what I really think, I would be so sad all the time. We create to fill a gap—not just to avoid the idea of dying, it’s to fill some particular gap in ourselves. So yeah, I write things where people will lay down their lives for each other. And on a personal level, I know many wonderful people who are spending their lives trying to help others, or who are just decent and kind. I have friends who are extraordinary, I love my family. But on a macro level, I don’t see that in the world. So I have a need to create it. Hopefully, that need gets translated into somebody relating to it and feeling hope. Because if we take that away, then I’m definitely right. I want to be wrong, more than anything."

In the Avengers franchise so far, Whedon has filled in some of those gaps nicely. In one of the best scenes, Hawkeye finds the Scarlet Witch hiding from the battle, retreating at the moment she is most needed. He reminds her that she has a choice: she can succumb to her grief, her pain, and her past, or she can embrace hope by stepping out the door, putting her old life behind her, and becoming an Avenger.

She steps out the door. She, too, wants there to be hope more than anything.
Posted by Anthony at 6:12 PM