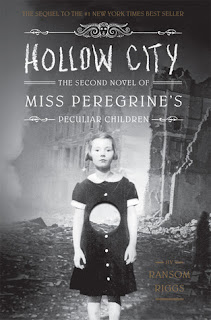 In a culture where families are collapsing at a sobering rate, this kind of story strikes a chord. Hollow City is not suggesting every family is automatically good, but it is asking readers to appreciate the family they have.

“I liked this idea: that peculiarness wasn’t a deficiency, but an abundance; that it wasn’t we who lacked something normals had, but they who lacked peculiarness.”

I’ve been reading a lot recently about dyslexia. One clear message is that we must stop seeing it as a deficiency and see it as a gift. It’s not that the dyslexic lacks something normals have; the normal lack the abundance of dyslexic peculiarness. That’s not a bad perspective.


“Everything happens for a reason,” I said…

“I thought you didn’t believe in destiny,” said Emma, assessing me skeptically.

I didn’t – not exactly – but I wasn't’ quite sure how to explain what I did believe either… “It’s not about destiny,” I said, “but I do think there’s balance in the world, and sometimes forces we don't understand intervene to tip the scales the right way.”

Hollow City is a spiritual book in the sense that it promotes a view of the world that allows for the supernatural to intersect with the natural. It’s not promoting one religion (in fact, I’m pretty sure the author draws from several), but it does promote a worldview that supports prayer, the afterlife, and a belief in forces bigger than ourselves. (Note to parents: Young or immature readers may need some help sorting through the competing ideas.)


“At least we still have the Tales of the Peculiar,” said Claire, wringing seawater from her blonde curls “I can’t get to sleep at night without hearing one. “

“What good are fairy tales if we can’t even find our way” Millard asked.

I wondered: How to find our way where?

“Giants are real,” Claire murmured, her voice weak but full of wonder. “And so are the tales!”

“Let’s not jump to absurd conclusions,” said Enoch. “What’s more likely? That the writer of the tale we read last night was inspired by a rock that just happened to be shaped like a giant head, or that this head-shaped rock was really a giant…the tales are just tales and nothing more.”

“Some truths are expressed best in the form of myth.”

I kept thinking of how C.S. Lewis and J.R.R. Tolkien were influenced by the myths and fairy tales that pointed them toward Christ. I’m not saying Riggs is another Lewis or that Hollow City points people toward Christ, but it manages to capture some of the wonder that comes with the realization that reality is deeper and wider than it seemed. There are believers and skeptics in the story, so the author allows for some back-and-forth. In the end, I think we are meant to walk away siding with wonder.
Posted by Anthony at 6:50 AM