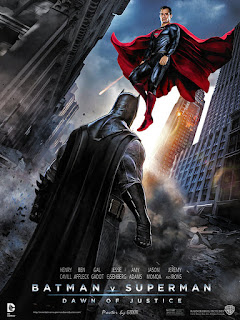 In the same way that Lex assumes that what is true about himself is true of others, Batman assumes Superman is like him. Batman knows that frustrated people with power do bad things, and the more power they have, the greater the scale of their damage. The only reason Batman’s not as destructive as Superman is that he’s not a Kryptonian god. If Superman’s heart is anything like Batman’s, he will bring doom to the world (and a vision from the future appears to confirm this). No one with that much power can be trusted to use it wisely.

A deep cynicism about the goodness of people pervades this movie. “No one stays good in the world,” mutters Superman. This is a superhero’s Breaking Bad, a look at how the best of intentions can lead down the darkest of paths. Even Martha Kent is not immune. She tells Clark to be everything the world wants him to be – or nothing at all, because he owes them nothing. Diana Prince (Wonder Woman) says, “A hundred years ago I walked away from mankind; from a century of horrors...Men made a world where standing together is impossible.”

Batman v Superman: Dawn of Justice grimly lays bare the idea that people (and I say 'people' not 'humans' so Superman is included) can produce any kind of worthy savior. When Jonathan Kent tells the story about saving his farm while destroying another, he highlights a very depressing but true human dilemma: there is almost always a downside to every success. When Clark saves someone, he is making a choice to let someone else perish. He’s super, and he does heroic things, but he’s not God. He can't see all possible outcomes. The scales are impossible for him to balance. He will never be worthy enough.

Synder's view of superheroes borders on nihilistic, but it’s probably more honest than most of the other versions we see (except for perhaps The Watchmen). In Marvel’s universe, the heroes are sufficient to save humanity - and amuse us in the process. In DC's universe, the heroes are more like Gandhi: they are sincere and effective in their own way, but untimely the change they enact is often flawed - and they can even bring about unintended harm.

So what’s the solution? Is there any form of redemption and hope in the midst of this bleak moral and physical landscape? Yes, but considering the groundwork that Snyder has laid, it’s an odd one. The hope is humanity – the very people that have created the problem. As Bruce puts it, “Men are still good. We fight, we kill, we betray one another, but we can rebuild. We can do better. We will. We have to.” Or, if I may paraphrase, “People are still good except for all the times they are terrible. Do better!”

That’s hardly a glowing recommendation, but it is the best a humanistic view of the world has to offer. The poignant moments in the film are meant to remind us that most people deeply care for others. People can and do rebuild. It happens all the time. The problem is that the cycle keeps repeating. Deeply caring people rebuild the city with the same moral and cultural ruins that have failed them time and again. With what will they rebuild? Batman’s hollow optimism? Superman’s flawed internal moral compass? Martha’s cynicism?  Lois Lane's dangerous bravado? The government? Just look at our own history. Considering the violence in our own world in the past century, why would a merely human solution make us optimistic for the good of the world?

But perhaps that is the point. Maybe we weren't meant to feel that much better after a one paragraph rah-rah speech at the end of a two-hour expose of the dark side of human nature. I’d like to think (and I know I speculating optimistically here) that this frustration is the set-up for the next movie. Snyder’s universe has highlighted two main kinds of people: powerful ones whose hearts are corrupt; and naive ones who think that they can just try harder and all will be well. Perhaps all those who live in this kind of  darkness will be brought into the light as the story continues, and justice finally dawns.
Posted by Anthony at 2:20 PM