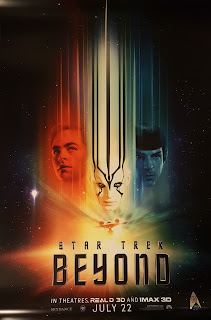 
Sound familiar? We hear these phrases (or some form of them) constantly. The idea is that if you can just find the real you and live it, all will be well. As compelling as that idea is in theory, it's often disastrous. I often think of Joss Whedon’s counter-commentary: “Remember to always be yourself – unless you suck.” It’s not Shakespeare, but you get the point.

The idea of “being who you are” shows up in Star Trek: Beyond, the third installment in the recently re-imagined Star Trek universe. While there's much to be said for the movie (including how critics and fans are in agreement on its merits), I am going to focus on the remarkably different outcomes in Kirk and Krall's respective efforts to be true to themselves.

When the Federation brought peace and placed him on a ship with a mission of spreading the same, Krall believed there was no longer a place for a man of war. His role as a soldier was deeply intertwined with what he perceived as his value as a human being and the meaningfulness of his life.

Meanwhile, Kirk expresses a growing inner frustration and restlessness to McCoy. Bones responds: “You spent all this time trying to be your father, and now you're wondering just what it means to be you.” So how does Kirk go about doing this while avoiding Krall’s disastrous road?

Whedon’s caution bears repeating. What if “the real you” is a deeply flawed person - and frankly, aren’t we all?  Star Trek: Beyond reminds us that several important things must be in place if finding “the real you” is going to end well: a meaningful purpose; a strong community; and a commitment to the good of others.

Who we are - our character, skills, and personality – must be aligned with a meaningful purpose. Krall is a man with no commitment to anything greater than himself; as a result, he is ready to decimate everyone around him for his own myopic interests. Krall fails to offer himself in the service of a worthy mission; Kirk is learning what it means to be a part of something that orients him toward the good.

There is an amusing opening scene where Kirk is trying to broker peace between two warring fashions. He fails, but not for lack of trying. When he returns to the ship, there is a sense that he is growing weary of exploring a limitless space and fighting for peace. The task is unending; so many people don’t want it. Why bother? The very existence of Krall answers that question for him. We fight for peace even in the smallest of ways so that the desire for revenge and the love of violence does not grow until it makes monsters of us all. When the movie closes with the classic Star Trek mission statement, we sense it means something to Kirk again.

On a deserted planet, marooned with his crew, Krall turned into a madman. His isolation from the broader human community allowed his anger and frustration to build without opposition, and he eventually twisted technology that was made for the good into something evil. He tells Kirk, “Unity is not your strength. It is your weakness.” The movie shows this to be obviously false.

Kirk is fortunate to have the formative impact of a solid community. There are plenty of times Kirk needs counsel or aid because he simply is not capable of navigating a situation on his own. Kirk needs them because, as Scotty points out, it’s a lot tougher to break a bundle of twigs than it is to break one at a time. They humble him; they complement him; they affirm him; they are a constant reminder that he must be the kind of man who lives for the good of others and not simply his own whims.  He is slowly moving from “this is who I am” to “this is who I ought to be.”

A Commitment To The Good Of Others

Even a strong team will fail if those involved are selfish or self-absorbed. Krall has no problem sacrificing his minions for his own twisted vision. He does not live to serve; he lives to be served. Kirk has his moral shortcomings, but he is ready to give his life for any one of his crew, even the newest members he barely knows. An egotistical and flawed young Kirk never loses his way on this point, and neither does his crew. There is a reciprocal sense of duty and loyalty that does not waver. Kirk had been warned that it's easy to get lost in space; one way to stay found is to remain deeply dedicated to serving those around you.

While Star Trek has always offered a fundamentally humanistic view of the world, there are plenty of components that align with what I as a Christian believe is crucial in order to live well.


Star Trek: Beyond is a good reminder that virtue, nobility and hope resonate across worldviews. Here’s hoping this franchise continues to be easily accessible by all those who value what it true and good in the world.