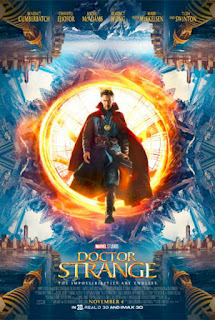 THE APPEAL TO MYSTERY

The movie suggests there is magic and power in the universe that can be accessed by tapping into the multiverse - a plot device that makes all of us sci-fi geeks immensely happy. However, that appears to make Dr. Strange's magic a form of science we don’t yet understand. Either way, it’s cool, and it offers a worldview that demands we be open to the reality of mystery. I've been reading recently about the importance of 're-enchanting' the world; that is, finding the awe, mystery and marvel in a world that is often coldly logical or rational. Doctor Strange does this well.

I know there are concerns about this movie moving beyond magic and mystery and dabbling into the occult. I didn’t see it. Perhaps this is a reflection of how far the Dr. Strange story arc has changed since its inception. It started with a clear focus on Eastern religion, moved to a connection with occultism, and finally morphed into what one fan called "a growing disenchantment in American culture, which over-emphasizes the importance of secular-scientific knowledge at the expense of knowledge passed down through other cultures.” In other words, you could get a very different kind of Dr. Strange depending on who was writing the comic. My sense is that the movie acknowledged its roots without proselytizing for Eastern religion. In the sense it felt more like the Matrix to me: it appropriated what it needed to in order to tell the story.

However, I do think it is important that there be what some have called ‘hedges’ in stories about magic. In other words, if the supernatural world is real, and there is a good and bad aspect to it, it’s important that our stories put hedges of safety between the fictional narrative and real life.

Tolkein and Lewis did this well. In Tolkein’s work, magic users are born that way. None are human (Aragorn has elven lineage), and most who use it are a Middle Earth equivalent of angelic. When those who are not born into it try to meddle, bad things happen (think of the hobbits looking into the palantir). In Lewis’s Chronicles of Narnia, there are witches – but no one wants to be one, and there is no way in which the book gives any clues about how one might go about become one. These two are often contrasted with the Harry Potter series, in which actual occult books and people are named, and spell casting has similarities to what one sees done in modern wiccan rituals. That wasn’t Rowling’s intention to be sure, but some hedges went down that authors like Tolkein and Lewis were careful to leave in place. Perhaps it's because these hedges are gone that the Wiccan community likes her series a lot, even if the perceived Wiccan elements are projected into it.  Please don't post an angry defense of Harry Potter. I'm just noting that her series was different in that aspect.

I give that background to make the case that Dr. Strange has plenty of hedges around the portrayal and use of magic.

I liked Dr. Strange a lot. It meets my criteria for entertainment: It was good (done with excellence); it was true (it was honest about life and morality); and it was noble (it made me want to be a better person). I sense that, like Iron Man, Dr. Strange is going to struggle with his own inner demons, and I would expect that he will be drawn toward compromise. But that's what makes a story compelling, right? Being good is hard; compromise can be compelling. Hopefully his strangeness does not refer simply to his unusual ability to wield magic; hopefully it applies to his ability to remain virtuous and good in a multiverse full of evil.
Posted by Anthony at 1:51 PM