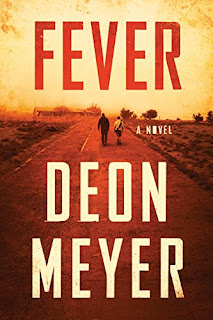 First, it was decent. People of all ages and backgrounds could read it. Yes, it's violent and there are adult themes, but it's handled in a way that makes the point without drawing people into a kind of participation by proxy.

Second, I appreciated its treatment of religion. There is an intense religious leader who appears to be a kind of power hungry schemer, but we find out at the end that he is good-hearted man who knew more about what was going on behind the scenes then some of the main characters (and us readers) . In hindsight, he may have used religion as a tool, but not because he was insincere about his faith or because he was power hungry. He was desperate to keep people safe in a city that would not heed his warnings. He even models a selfless sacrifice at the end, putting up with an underserved and brutal beating in order to bring about truth and healing.

Finally, I found the source of the plague interesting. In both Fever and The Ship, it's do-good social planners whose utilitarian schemes bring about incalculable pain. There seems to be a trend in horror and apocalyptic stories away from religious despotism and racist facism and more toward science - and scientists - run amok. This seems to coincide (perhaps coincidentally) with the rise of groups such as antifa. They are emerging from a group of liberal social activists who are not traditionally associated with violence, but they feel so backed against the wall that they resort to bad means to achieve what they believe to be a good end. Even the recent horror movie Get Out fits loosely into this shift. The villains are not the obvious racists you expect to see; they are the cultural liberal elites whose racism is much more subtle but just as real. I like this trend in that it seems to be righting an imbalance in apocalyptic villainy. Every human and every institution have the seeds of evil in them; let them all represent. 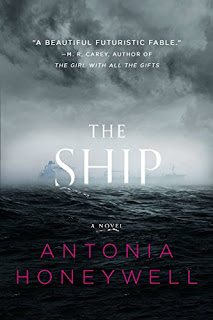 I didn't like The Ship as well, but that could have to do with the narrower scope of the story. There are only two locations: a city in a world that is falling apart and under an Orwellian kind of racism, and a phenomenal ship that takes a select group of elite survivors away from land and onto indefinite life floating in an attempted paradise on the ocean while the rest of the world burns. It's a story with big themes, but it felt...smaller. I like the epic nature of Fever; chalk it up to personal preference.

However, I liked the way in which The Ship built on the legacy of both 1984 and Brave New World, two of my favorite dystopic novels. The depiction of the boot crushing the neck of the average person at the beginning of the book is chilling; it's also cleverly accomplished more by innuendo than detail.  Life on The Ship felt more Huxleyan. It's a 'world' where comfort is key, where everyone is so distracted by all their food and games and clothes that they don't bother to think about when and how that life would inevitably end. It's a pointless life on a ship with no destination; the most anyone can do is try to find a distracting happiness that takes their mind of the end. If existentialism had a cruise, it would be this one.

Back to Orwell, and on toward a plot element that will be a caution for some. Honeywell uses sex in much the same way Orwell did - as an act of rebellion, an attempt to feel alive in a world that mimics life. It makes sense to me as a plot device even as I wish the author had left the sex scenes a bit more vague, as it makes it difficult for me to recommend the book to a wide audience.

Having said that, I was struck by how this book affirms two very important things: human life matters, and sex matters. Honeywell highlights in many ways the horror that follows the devaluing of any kind of human life. Not only does it devastate the people who are victims, it sears the souls of those who refuse to look upon others as equals. Second, it's interesting to me how even in a story that offers a moral code quite different from mine, there is no escaping the universal agreement that sex is a particular kind of interaction that has a uniquely formative power in our lives. Our culture keeps insisting, "It's just sex," as if the act were the equivalent of eating, drinking, sleeping  - just another human activity. But it's not. It's so much more than that, and our best storytellers no how to take one of our most profound human experiences and treat it as if it mattered in ways that are far more important than just the sex itself.

In the end, I'm not sure if the story was one of hope or despair. There is the potential for life and a future for the pregnant heroine and her unborn child even as the ship shows its first sign of falling apart. Will she find land? Will it be hospitable? We don't know. Maybe this is the existentialism coming through again: all that matters is that she had the power to make a choice to leave the ship. Maybe she can make a difference or maybe not; either way, her life was her own.

RECOMMENDATION: With caution. Loved the themes; could have done without some of the detail.