All the recent discussion of the U.S. economy has piqued my interest in an area that is notoriously hard to understand. Who gets credit, and why? How easy is it to establish cause and effect? As I have been researching, I am struck by how one can paint remarkably contrasting views of the economy by isolating particular areas, or particular time frames. To get an idea of how we are doing overall, we need to see the Big Picture set in the context of our history. Before I get to some specifics on both those things, a few thoughts that have lingered with me as I have been reading.
Now, for what it’s worth, here are some things worth considering when we talk economics. I offer these if for no other reason than to note that a five minutes news story or youtube monologue will almost certainly fail to do justice to the Big Picture set in the context of history.

So will this post. Do your own research too. Feel free to add to the breadth and depth of what I offer here (or correct me if I am wrong) for the sake of all of us learning.

1. The United States generally follow the pattern of world economics in developed countries.
Here's the World Economic Outlook from the IMF.  Notice how, broadly speaking, GDP trends mirror each other. The Federal Reserve Bank of Dallas finds pretty much the same thing. (There are three links there, btw). As a final example, notice the Brookings Institute's graph showing 10 year government bond yields. Other than Japan, the other countries listed show a remarkably similar pattern over a 25 year stretch.

2. The stock market has trends. Know them. They are easy to look up. Stockcharts.com shows what's been happening for the past 5 years. It's fine to say, "The stock market is growing under the President's leadership." It's just as important to know if it's a continuing trend or the reversal of a previous negative one. The question was never if President Trump could turn the stock market around; it was always if he could keep the momentum going.

5. Our population is shifting as an increasing percentage of us are older. This has huge implications for the workforce and thus the economy, as types of jobs shift and more taxes go to support the retirement plans (public and private) and medical care of an aging population. 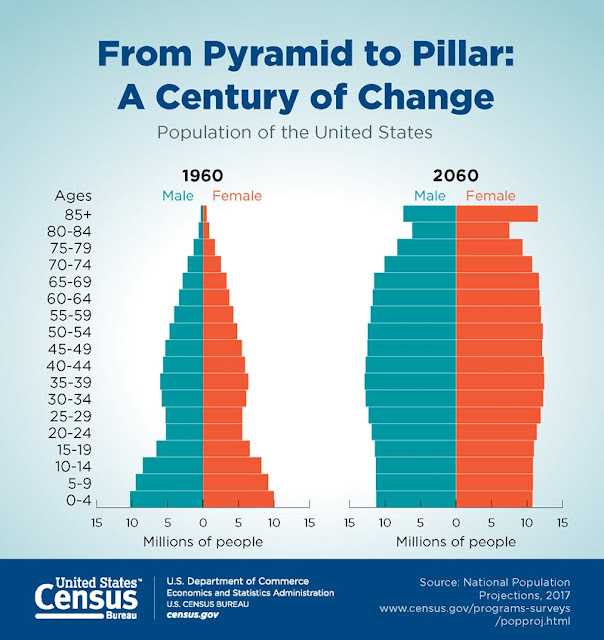 Approximately 22% of our population is over the age of 65, an increase from 8% since 1950. According to the Pew Research Center, in 1920, the annual number of births per women of childbearing age was 118. In 2012, it was 63. This trend is going to increasingly tax the economy.

6. Our job market is shifting. This also has huge implications.  According to the U.S Bureau of Labor Statistics, here are America's fastest growing occupations starting in 2014 and projected in to 2024: technicians, therapists and their assistants (occupational and physical), home health aides, divers, nurse practitioners, statisticians, and ambulance drivers. Notice what's missing? Industry. We run a trade surplus of services, but not goods. We have lost at least 5 million manufacturing jobs since 2000. Output has not changed that much (in terms of raw numbers) because we have become more efficient, but the percentage of goods in our GDP is shrinking.

7. Unemployment has been going down for a while in every demographic (which is not to say they are all equally employed). In fact, after unemployment spiked as a result of the Great Recession in 2007 (reaching a high of 10%), it has been trending downward steadily and significantly such that it is now lower than before the Great Recession. Here's the official unemployment from the Bureau of Labor Statistics. Also, Wikipedia has a great page with lots of links. 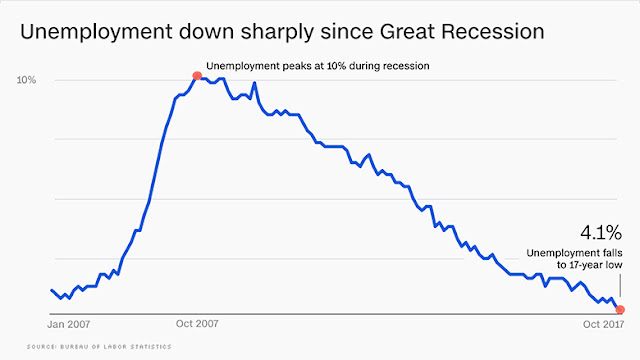 Worth noting: "employed" is not the same as "employed fully." There is a way of recording and talking about unemployment that does not do justice to the real financial situations of people. The official unemployment rate is just under 5%. If you factor in those who are underemployed, it rises to about 8%. Much of the current job growth is in industries that pay $20,000 to $25,000 a year.

9. Hourly earning (and buying power) is going down. One story might report that wages are going up (yay!) while ignoring that buying power is going down. It's possible to make more money than you used to make and be worse off. Since the 2009 recession, average hourly earning has been slowly but steading going up (though it dipped in 2018). Real hourly earnings, however, took until 2015 to catch up, then have plummeted since then.  To top it off, the dollar has lost value steadily for decades.

10. The number of people receiving SNAP has been trending down for years. Once again, it's fine to note that SNAP participants are fewer than ever under this administration. It's only fair to note what the trend has been; otherwise, it can sound like "Look what I fixed!" when it should be, "Look what is continuing!"

12. Poverty is on the rise - probably. One does have to consider that cost of living - and thus thresholds - can change depending on where one lives. Homelessness rose in 2017 for the first time since 2010 - and, oddly enough, a good economy is to blame (housing prices increase and force those on the bubble into the streets).  The difference in the distribution of wealth throughout social classes is staggering; the past 20 years have created a true chasm between the top 10% and the bottom 50%. We might be getting wealthier, but 'we'  - at least over the past 20 years - means almost entirely the top 10%.

13. Oil and gas prices, which can really impact the price of goods both manufacturing and transportation, fluctuate for a lot of reasons, some of which are in Washington's control and many which are not.

What does all this mean?

1. Economics has a lot of moving parts. Focusing on one part does not give a big picture; listening to one talking head doesn't either. There are complexities here that keep the best experts on their toes. We need to be careful about how quickly we jump on political bandwagons full of jeers or applause.

2. Trends happen for a lot of reasons. It's worth considering all the factors before we lionize or villianize (?) politicians. I've been reading on numerous cites that economists are predicting a "correction" - basically, a recession of some sort. I haven't heard them place blame any particular place. We are due. It's part of the cycle.

3. We should be careful how we present things. It is possible to praise something that is going well in a way that suggests something terrible has been fixed when in fact something already healthy is being encouraged to continue being healthy. Honesty requires a presentation of facts that capture the big picture in the context of history.

Email ThisBlogThis!Share to TwitterShare to FacebookShare to Pinterest
Labels: economics