I've been looking up vaccine rates and autism rates around the world since that topic just can't seem to leave my news feed. I enjoy doing research on issues like this if for no other reason than I am interested in the truth.

The stats can be tricky for several reasons.
I've always done research on this topic by reading the competing studies, but that usually just leads to my reading a lot of sound and fury. (I don't believe there is a connection, btw - see articles like this from the Annals of Internal Medicine, or "Safety of Vaccines Used for Routine Immunization of US Children: A Systematic Review" from the American Association of Pediatrics, this podcast from Science VS. (which also talks about some of the other possible side effects), or the tons of resources from the Immunization Action Coalition.)

So, I thought I would take a different approach this time and look for what is happening around the world. In spite of the caveats I mentioned earlier, there are trends we can observe. I will be using data from OurWorldInData.org. They compile data from other organizations and make it understandable; they also allow downloads of their charts for use in presentations :) 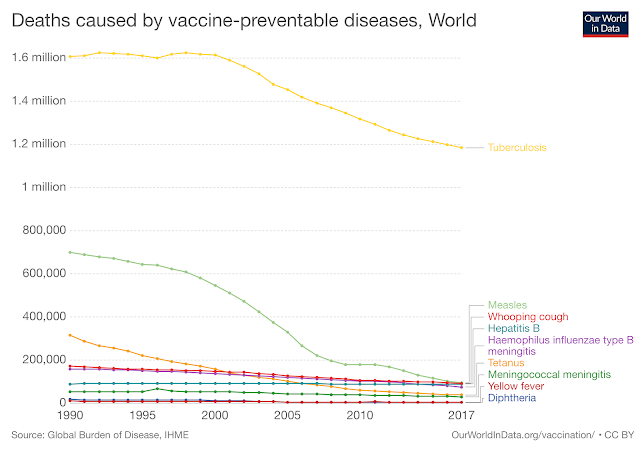 It's worth reminding ourselves that, though TB remains a problem, there has been a fantastic drop in fatalities. Vaccines have clearly been a blessing to the world in terms of saving lives. Now, let's isolate measles, since measles is experiencing a recent resurgence. According to the WHO, it has quadrupled globally in 2019. 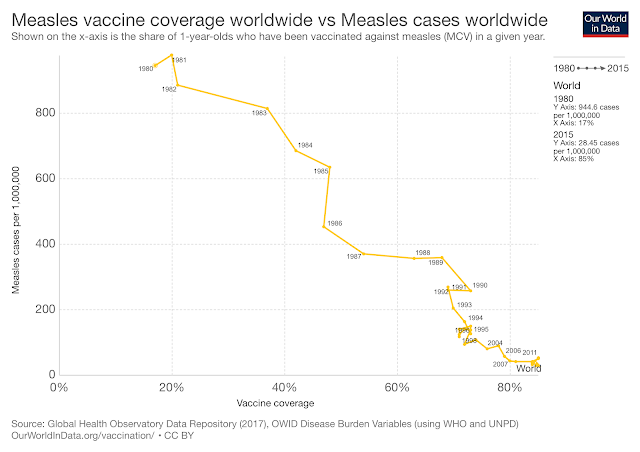 Note that as measles vaccinations increased, the cases dropped dramatically. By way of contrast, Africa, one of the least vaccinated continents, has seen a 700% surge in measles this year.

The goal, by the way, is something called "herd immunity."100% coverage is not needed. Once a certain threshold has been crossed (and that can vary by disease), the disease functionally dies out. Vaccines work at their peak effectiveness in conjunction with herd immunity. So, yeah, vaccines work pretty well when they are administered into the "herd" environment in which they are most effective. It's not that they can't work for outlying individuals, but there needs to be community buy-in to really see them do their magic. Check out this video, "How Does Herd Immunity Work," from the Oxford Vaccine Group.

Around the world, the success of vaccines has been remarkable. We, of course, benefit from this. Note how vaccines have changed the health and mortality landscape in the U.S. alone. 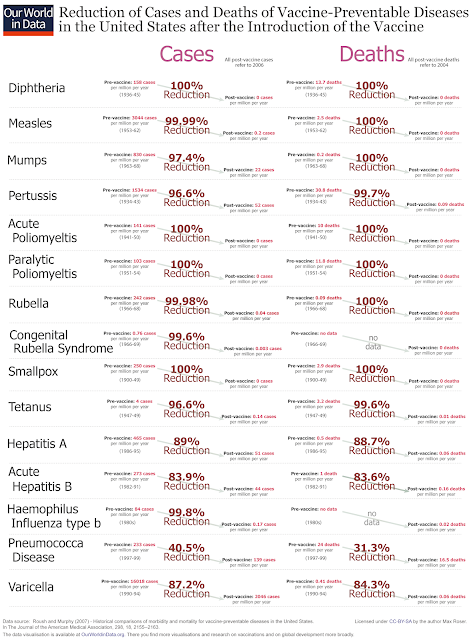 But what about the fear of autism? Let's just look at data as it plays out the real world. Here is a map showing DTP3 vaccinations: 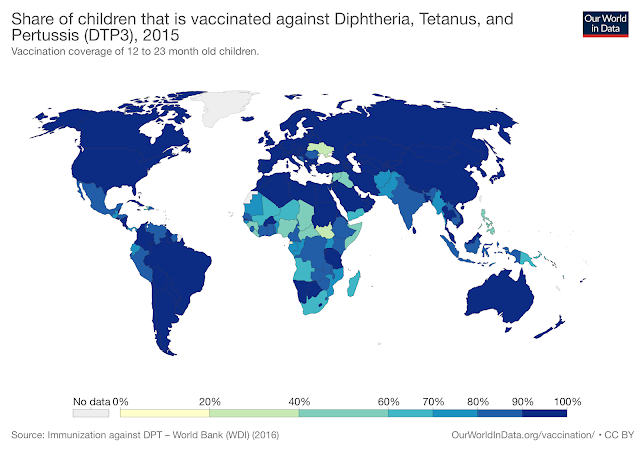 Here is the share of children vaccinated against measles. 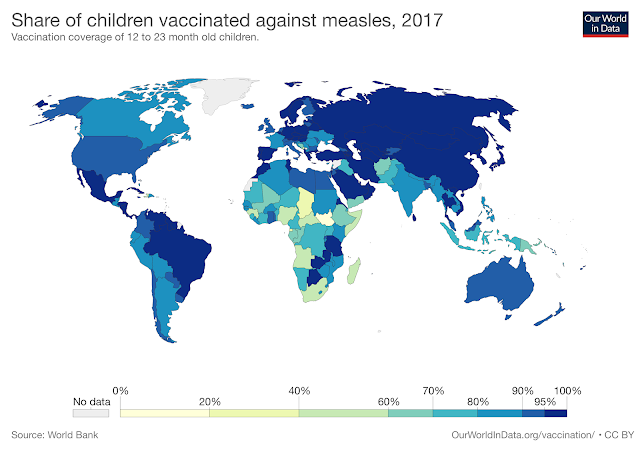 Now, here is the share of children diagnosed with autism spectrum disorders in 2017 (the last year for which I could find comprehensive data). 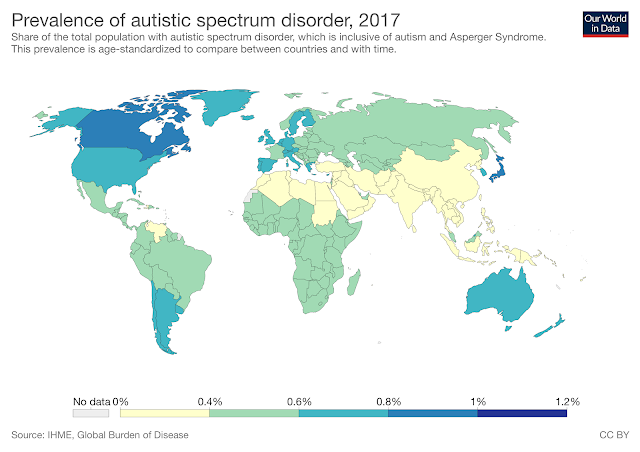 One would be hard pressed to establish a vaccine/autism correlation based on this data. ASD rates don't correlate with vaccines, at least not by using our current metrics. Considering that the broadening of definitions and better diagnosis has made the ASD numbers misleadingly inflationary, the lack of correlation is even more striking. A few other things to note:


Google "causes of autism." Find well-respected organizations that are trying to figure this out, like Autism Speaks, or the National Center For Health Research, or the Mayo Clinic, or the Autism Society, or the American Speech-Language-Hearing Association, or the American Pregnancy Association, or the National Autistic Society, or the Association For Science In Autism Treatment, or the Emory University School Of Medicine, or the University of Queensland's Brain Center, or the Southwest Autism Center of Excellence, or the Children's Hospital of Philadelphia, or a host of others.

Perhaps they will be helpful in shedding the light of truth on this complex issue.
Posted by Anthony at 7:51 AM