Free To Believe: The Battle Over Religious Liberty In America (Part 1/3) 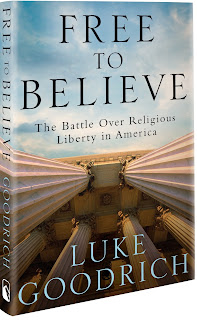 Luke Goodrich works for the Becket Fund for Religious Liberty. He's won multiple Supreme Court victories for religious freedom. He has appeared on Fox, CNN, ABC, NPR, and been in the New York Times, The Wall Street Journal, and Time Magazine. He's also an adjunct professor at the University of Utah law school where he teaches constitutional law.  In other words he's qualified to speak on this issue.

I suspect he will also surprise - and challenge - both liberals and conservatives on this issue. While it's written broadly for people of faith and specifically for Christians, I think it also offers great food for thought for those who are not religious.

Don't assume I automatically agree with everything - I have some questions that remain (and perhaps even some points of dissent) that will emerge over the course of this three part series. Meanwhile, I would love to see a thoughtful conversation emerge from this book (and these posts).

I am going to blog a review/overview of his book in three installments that will match the three sections of his book:

1) What Is Religious Freedom
2) What Are The Most Serious Threats?
3) What Can Be Done?

What I blog will be a mix of direct quotes and paraphrases from his writing. I will try to note where I am stepping out of the book and offering my own commentary.

PART ONE: WHAT IS RELIGIOUS FREEDOM?


Goodrich’s lead-in is important: we (Christians) could be tempted to place our hope in human institutions. Compared with the rest of the world, we have a stable legal system with broad constitutional guarantees of religious freedom. Our Supreme Court has repeatedly (though not perfectly) ruled in favor of religious freedom. We think if we could just preserve those institutions... win the next election... get the right Supreme Court Justices appointed... then we have hope. That kind of hope is hollow. Our hope is not rooted in any human institution; it is not rooted in fair laws, favorable election results, or friendly Supreme Court Justices. It is rooted in a person, Jesus Christ.

How Christians Get It Wrong


Goodrich contrasts two opposite views of how Christians think of the religious freedom issue in the United States: Pilgrims and Martyrs (he also talks about Beginners - those who have no real vested interest in the topic - but the main focus is on these two).

Pilgrims trace religious freedom as a founding principle back to European Christians who came to America to be free to worship God. Their descendants eventually enshrined religious freedom as the “First Freedom” in our constitution. Some Pilgrims go further, arguing that America is a chosen nation, a unique instrument of God to bring freedom and blessing to the world, and perhaps even function as the modern equivalent of Israel. Others more modestly claim that America is a Judeo-Christian nation (with most of the founding fathers embracing that worldview). We have been blessed because of this heritage.

There are some problems with this.

Second, the Founding Fathers weren't exclusively Christian, and many who claimed the name weren't particularly devout. In addition, America’s record of protecting religious freedom is sketchy.


Third, a government that promotes Christianity sounds good in theory but typically works out badly in practice. When the state supports the church with privileged position or financial support, it inevitably tries to control the church. The church becomes accountable to the state, and the church gets lazy. At the time of the founding, the most vocal advocates of state-supported churches were the Enlightenment Rationalists, who were deeply suspicious of faith. They wanted the state to support religion precisely to tame it - or, is David Hume put it, to “bribe its indolence.”

Finally, the Pilgrim view has some unfortunate practical effects. Many Pilgrims see Christianity losing its favored place and become afraid - which often produces anger, which often leads to belligerence. Because of this, the Pilgrim view can alienate non-believers from Christianity and from the idea of religious freedom in general. Right or wrong, non-believer see Christians as more interested in fighting for their rights than laying down their lives. They see religious liberty as a disguise for maintaining Christian dominance.

Martyrs reject the idea that America is uniquely chosen nation. Even if it is a Judeo-Christian nation, it's not a good example. We brutally massacred thousands of Native Americans, systematically denied women equal treatment, and forcibly enslaved millions of human beings (in addition to the religious persecution noted above).

Martyrs say Christians shouldn't expect or seek cultural dominance or preference. That's contrary to the way of Jesus. Instead, the church should be a grass roots countercultural movement. Jesus and the early church were persecuted; we should expect the same. In fact, persecution means we are blessed - and may even be good for the purification of the church.Martyrs are quick to quote Tertullian, the early Church Father who wrote that “the blood of martyrs is the seed of the church.” 1st Century churches grew under persecution; other churches in places like China have grown rapidly under persecution. The American Church, by contrast, is arrogant, overfed, and watered down.

Martyrs are also tired of culture wars. Martyrs don't want to preserve a special place for Christianity in American culture; they want to be countercultural with their lives at a grass roots level. The Martyr suspects that religious freedom is an excuse for trying to maintain a position of cultural dominance.

The Martyr’s position has problems, too.

First, while the Bible warns that Christians will be persecuted, it does not teach the persecution is necessarily a good thing. It's an injustice that God will rectify (see Revelation 6). The early church didn't view persecution as a good thing. They lamented when Stephen was killed and prayed fervently for Peter to be released from prison. Tertullian’s line actually comes from a document where he was demanding that Roman governors stop persecuting the church.

Second, Martyrs will often judge Pilgrims rather harshly, writing them off as more loud than loving and more Republican than righteous. Martyrs can tend towards cynicism, disparaging those who are concerned about religious freedom and downplaying stories of the violations of it. In short, while Martyrs rightly reject the idea that religious freedom should be valued as a means of maintaining Christian dominance, they can go too far in the opposite direction and see religious freedom as a luxury that can be abandoned lightly.

At this point, Goodrich states three goals for the book.

How To Get It Right


His next section sets the foundation for a theology of Religious Freedom.


This ultimately is where religious freedom comes from. Human beings are created in the image of God for relationship with God, but we can't have an authentic relationship unless we also have the freedom to embrace or reject God. And if God himself doesn't coerce us into our relationship, how much less should the government? When the government tries to do so, when it prevents us from freely relating to God, it is elevating itself above God and violating the created order.

When the government infringes on someone following her conscience, it is invading a realm that belongs only to God, and it is a denial of something that every human being deserves: the opportunity to freely embrace or reject relationship with God.

Does this mean that religious freedom has no limits? No.

Suppose a man believe that God wants him to kill his neighbor. There are two competing rights: the man's right to religious freedom and the neighbor’s right to life. In this case, the right to life obviously limits the right of religious freedom. The task becomes much harder as the situations become more complex and their rights become less clear. More cases will be explored throughout the book, but for now, the point is that religious freedom has limits, and those limits generally arise from the government's duty to uphold justice for all people.

How To Persuade Others


Without going into all the details, Goodrich argues that it produces moral virtue. The positive effect of religion on society is confirmed by empirical data.


“After conducting multiple studies, Harvard political scientist Robert Putnam found there is one factor more than any other that predicts how generous, altruistic, and civilly involved a person will be measured by how much they give of their money and time, how often they help other people, and how much they are involved in civic and community life. That factor is not education, income, age, race, gender, or political persuasion. It is regular involvement in a religious community. Similarly, a study from Georgetown University estimates that religion contributes over 1 trillion dollars per year to society through education, healthcare, local congregational activities, charities, media, food, and another social services. That's more than the annual revenue of Google, Amazon, Apple, and the rest of the top 10 tech companies in the country combined. In short, protecting religious freedom allows good works to flourish.”

If our society values diversity as it claims to, it must also protect religious freedom as part of that diversity.

2) How Religious Freedom Protects Our Other Rights


As James Madison puts it, because religion is “the duty which we owe to our Creator,” it “can be directed only by reason and conviction, not by force or violence.” By its nature, religious freedom carves out an area of human life that the government can't touch.

Religious freedom starts from the premise that there is an internal realm of conscience that the government can't control through force or violence. That is because our conscience is responding to something higher than the government: the Creator. This principle serves as a foundation for all other rights. If rights are simply gifts of the state, then the state can take them away. If they come from a higher power, the state cannot - or should not - take them away. Around the world, religious freedom is like a canary in the coal mine for all other rights. When a government begins to take away religious rights, other rights will soon follow.

3) Why Religious Freedom Is A Fundamental Human Right


Part Two: What Are The Most Serious Threats?

Once I have Part 2 and Part 3 posted, I will attach links here.
Posted by Anthony at 7:42 AM