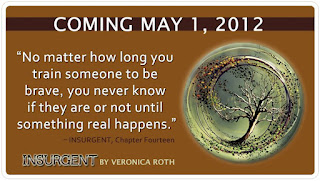 The Hardship of Life

While reminiscing about the death of her parents and a close friend, Tris thinks, “There is a part of me that wants to be lost, that struggles to join my parents and Will so that I don’t have to ache for them anymore. A part of me that wants to see whatever comes next.”  As someone who has lost a father, that resonated with the lonely child in me.

In the meantime, she wishes she could be part of a process that would make her new, “stripping the dirt from our lives and sending us out into the world clean. But some dirt is destined to linger.” As Insurgent closes the ache in Tris is still very real, but the dirt is starting to wash away.  That's a message that is both honest and hopeful.

This story takes an hard look at the difficulty and beauty of forgiveness. Tobias has to face the harsh legacy of both his mother and father – and his journey isn't easy. His father may have been cruel, but his kind mother's quiet legacy damaged him as well.


“She had to leave me with my father, I get that,“he says,“But did she think of taking me with her?”
I purse my lips. “Oh. She left you with him.”She left him alone with his worst nightmare. No wonder he hates her.

Tobias’ mother defends herself by saying:


“I thought you would be safe with him. Safer with him than with me.” Tobias says nothing. “I see now that I must have been wrong.”  He still says nothing. “I wish…” she starts.
“Don’t you dare try to apologize.” His voice shakes. “This is not something you can bandage with a word or two and some hugging, or something.”
“Okay,” she says. “Okay. I won’t.” 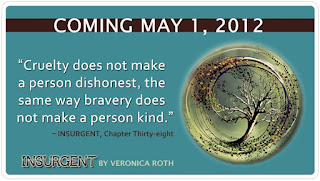 Tris was forced to kill a friend named Will in Divergent; one of the ongoing tensions in Insurgent involves Tris and Will’s friends and family. Since they are all part of the insurgency now, she has to live with those who love the one she killed.  Close to the end of Insurgent, we see a moment of grace when Tris asks for forgiveness:


“We kneel together on the stone floor, and I clutch her as tightly as she clutches me. “It’s already done,” she says. “That’s what I meant to say. That the forgiving was already done.”

I appreciate this kind of honesty is Insurgent.  Forgiveness is an ideal often obscured by the pain of abuse and abandonment. Though it is attainable, a long, rocky road must sometimes be traveled on the way to peace.

An interesting question lingers throughout this series: What does it mean to be human?  Tris says,   “I did not know that my entire personality, my entire being, could be discarded as the byproduct of my anatomy. What if I really am just someone with a large prefrontal cortex…and nothing more?” That’s a great question for readers in a society that so often reduces us to chemicals and DNA.

The Abnegation are a selfless, religious faction, but the Amity are the most overtly religious in this series. Insurgent highlights their belief “in a God who gives peace and cherishes it." At one point they pray over Tris that the peace of God be with her, even in the midst of trouble.”

The use of factions allow Ms. Roth to show the importance of living a well-rounded life.

The ERUDITE (Knowledge) are  one of “the essential factions – without them, we would be incapable of survival…without them, there would be inefficient farming, insufficient medical treatments, and no technological advance.”  The Erudite have a problem, though. Intelligence without character is a bad combination. Their partnership with the Dauntless during the revolution would seem to be the ideal combination of knowledge and boldness, but there is a far more grim perspective: "Ruthlessness and cold logic, it seems, can accomplish almost anything…”

The AMITY are the conscience of them all, but they too have problems. The longing for peace can jeopardize the need for truth.


“Do you think Amity will lie for us?’ I ask him, leaning out of an open doorway.
"To prevent conflict? Tobias nods. "Absolutely."

CANDOR is committed to honesty, but honesty by itself is a lonely virtue. Honesty cannot run a city. They need something from the Dauntless, who "know how to fight even when fighting seems useless.”


Since Tris chose DAUNTLESS, it is no surprise that the Dauntless get some great press. Tris was born in ABNEGATION, but her commitment to the Dauntless showed here the selflessness need not be cowardly, fearful, or even peaceful. 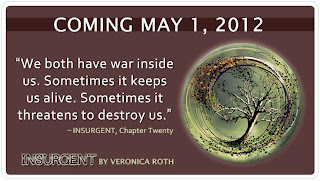 “My mother said that everyone is selfish, but I became less selfish in Dauntless. I discovered there were people I would fight for. Die for, even.”

All the factions need boldness to truly thrive. But being Dauntless comes at a cost.


“We [Dauntless] are the only faction that could divide like this. Amity would not allow a schism; no one in Abnegation would be so selfish; Candor would argue until they fond a common solution; and even erudite would never do something so illogical.  We really are the cruelest faction.”

At one point Tobias says to Tris:


“The value of a sacrifice lies in its necessity, not in throwing your life away…if you throw yourself into danger for no reason again, you will have become nothing more than a Dauntless adrenaline junkie looking for a hit, and I’m not going to help you do it….I love Tris the Divergent…but the Tris who is trying to destroy herself.. I can’t love her.”

Well said. So many modern YA romances feature teens doing self-destructive, irrational things because they are “in love.”  In reality, that kind of love is neither healthy nor loving. The plot is exciting and the characters memorable, but the best parts of Divergent and Insurgent have more to do with the importance and nobility of the war inside.