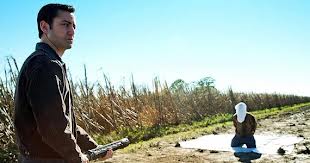 Looper takes the question seriously. 70 years from now, time travel has become a reality.  Crime syndicates are taking advantage of this technology to send their enemies into the past, where hit men immediately dispatch them and dispose of the bodies thirty years before the the people are dead. Eventually the syndicates send the older version of the killer back to be killed by his younger self and close the loop on the evidence of any crime having been committed. It's all very tidy.

It starts to fall apart when Joe, a hit man, comes back to kill a brutal crime lord called the Rainmaker. He does not know precisely who the Rainmaker is (he has narrowed the possible suspects to three), but he knows the boy will grow up to become a monster.

Meanwhile, his younger self realizes that the boy is not the problem.  The boy is a prodigy who will make or break the world. Someone will commit an atrocity against the boy that will turn the child into the monster.  Old Joe thinks he is coming back to save the world from the boy's eventual evil reign; Young Joe realizes his future self is about to unknowingly create the Rainmaker he has come back to destroy.

There is only one solution: Young Joe  must kill himself, wiping Old Joe out of existence and sparing the world from a nightmare.  Earlier in the movie, the local looper boss said to Young Joe: "Ask yourself: who would I sacrifice for what's mine?" At that point, Young Joe sacrificed his best friend for money.  We find out (in two heart-rending scenes) that Old Joe will eventually be willing to sacrifice two innocent boys so that his wife will not be killed by the Rainmaker.

As Young Joe gets to know his future self, he sees the monster he will become. As the story unfolds, he has an opportunity to answer a very different question: would he be strong enough to sacrifice himself for the sake of others?  When Old Joe comes for the young Rainmaker, Young Joe has a moment of clarity in which he sees the ripple effect of his choices:


"Then I saw it. I saw a mom who would die for her son, a man who would kill for his wife, a boy, angry and alone. Laid out in front of him  - the bad path. I saw it, and the path was a circle, round and round. So I changed it."

He turns his gun on himself, eliminating the man he will become to spare the boy he would have so deeply corrupted.

I've read several reviews faulting this movie for portraying suicide as a noble, ethical decision.  I don't think I agree with that analysis. There is a difference between taking one's own life in despair or selfishness vs. sacrificing one's own life for the sake of others.  Had Young Joe thrown himself in front of Old Joe's bullet to accomplish the same goal, I doubt there would be a lot of controversy.  The only difference is that Young Joe's decision is reasoned and purposeful instead of reactionary and instinctive.

I'm not sure the distinction matters in this scenario.The time travel creates a moral dilemma that cannot be replicated for us; within the context of the world of Looper, his decision strikes me as an act of courageous sacrifice on behalf of others.  Looper is not a morally pristine film - it glorifies some things it should not, and glosses over some other ethical dilemmas. But in this area, I thought it spoke powerfully against the narcissism and self-centeredness that characterizes evil.
Posted by Anthony at 3:09 PM