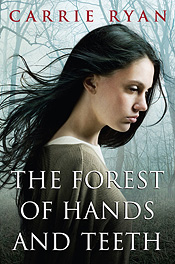 At times she longs to be one of the Unconsecrated, to have a life without pain. Eventually, Mary joins the Sisterhood out of obligation and despair. While she is with them, Travis, a boy she likes, is admitted to their hospital. This would be a great opportunity were it not for the fact that he is betrothed to her best friend, Cass, and Mary is betrothed to Travis's brother, Harry. This does not stop them from putting some serious effort into making out as often as possible.


“Its like waking up and being born and realizing what life is and can be. I drown in him, waves pulling me under and spinning me around as if I am nothing. Worthless, but everything.”

So far, what have we learned? Stolen moments of sexual tension are the means of discovering what life is and can be! And ladies, if you feel worthless, a hot boy will make you feel like you are everything!  Sure, Travis is betraying his brother and Mary her best friend, but honor and integrity are nothing to Mary in the face of passion:


“I am exhausted but deliriously happy. At night we are in our own universe, we belong only to each other, as if we have thrown off every other obligation... Standing here facing Travis, tasting him on my lips, I decide to throw everything else away.  I will face the wrath of Cass and Harry and Sister Tabitha with Travis by my side… I know I am asking him to betray his brother, to upset the balance of the village, and hurt my best friend. But none of that matters anymore. I am willing to throw it all away for him.”

One night, a young girl walks into the village through the fenced-in Path – and that should not be possible.  No one is supposed to be alive outside the village. She is promptly taken into custody by the Sisterhood –and then given to the Unconsecrated because, well, the story needed a villain, and what better source than organized religion? Almost immediately, the newly Unconsecrated girl leads the undead in an attack that breaks the fences and overruns the village. Mary, Cass, Travis and Harry along with a few others escape into the Path.

They eventually find another village. There are no Scriptures on the doorposts, no kneeling benches, no tapestries with prayers.  To Mary, it looks like a village that had known freedom. When the Unconsecrated attack, Mary and Travis find shelter apart from the others in a well-provisioned house. During the weeks of what Mary would have expected to be an idyllic situation, a harsh realization sets in:

“I am terrified [Travis] is not enough… I am filled with emptiness… because I cannot bear to tell him the truth… I am still hoping that he can fill the emptiness and the longing and that tomorrow morning I can wake up in his arms and it will be enough.”

FYI - he can't. Even Travis sees the writing on the wall. He says to her,


“I wanted to believe we could be together. I wanted to believe we could break our vows and that somehow everything would still be okay… I was going to let passion overwhelm my common sense…. I think that even then I knew I wouldn’t be enough for you, Mary. It’s no longer about the ocean. It’s about you and what you want and need. Would you ever give up the ocean for me?”

No, she won't, much to the surprise of no one. After all, "It's about you and what you want and need." She has spent the entire book putting herself before everyone and everything else; why change now?

This story is very confused.

On the one hand, boundaries are a crucial part of the plot. Fences, Guardians, the Sisterhood and social mores have kept death and chaos at bay for 150 years. It is certainly not an ideal life, and some of the people in charge are corrupt, but most of the characters in the story seem content. They love and live in the midst of duty and order. Every day, they snatch life from the jaws of death.

On the other hand, we are supposed to cheer for a protagonist who wants to break all kinds of boundaries.  It is order and commitment that have kept everyone alive; it is because of a carefully constructed Path that Mary can even dream of finding the ocean. Yet there is no sense that this obvious truth carries any weight when it comes to people.  One of the sisters says of Mary, “You place your own desires before those of your friend, before those of your community and God.” Yes, that is most certainly what she does.

I am reminded of a line from Catherine Fischer's Incarceron: “Escape is not enough. It does not answer the questions. It is not Freedom.” Mary may have escaped from the boundaries imposed on her, but she cannot run from herself. She is loose, but she is far from free.

She wants to break rules, disrupt order, and ignore boundaries. That is not heroic. That’s foolish. She left a wake of broken people behind her as she followed her heart. I felt sorry for everyone around her. When she finally took off on her own to find that ocean, I couldn't help but cheer that fact that those who remained behind were freed from her presence. I really didn’t care if she made it or not.

Unfortunately, all those things will find a compelling presentation in another story.