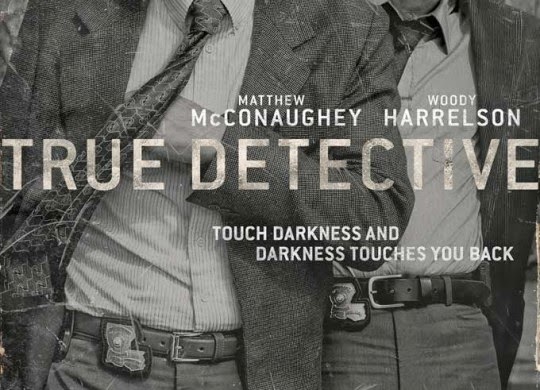 Cohle is a nihilistic, brooding, pessimistic atheist who thinks nothing matters, consciousness was an evolutionary mistake, evolutionary urges explain Marty's affairs (a perspective which failed to comfort Marty's wife), and people all secretly long to die. Perhaps that's why he spends quite a bit of his life doing his best to drink himself into an early grave. Why he has decided to hunt down criminals with a passion bordering on mania is not entirely clear, considering that his worldview offers little to help him even have the vocabulary to discuss good, evil, choice, justice, and goodness.

I've heard it said that the reason we can portray evil with such depth and nuance is that we understand it. We don't know how to portray goodness with the same clarity because we don't understand it. We know what it's like to give in to the worst angels of our nature; the better angels seem to hover just off our shoulder. True Detective understands evil both horrific and ordinary. What True Detective fails to provide is an equally compelling look at the goodness needed to counter it.

Cohle and Marty both have moments of clarity in the last episode: Cohle finally finds the connection to the human race he has been looking for ever since he read a verse in Corinthians that "the body is made up of many parts." Marty finally drops the mask of "Everything's okay - I can handle it" and breaks down weeping in front of his family. It was a hopeful ending to an otherwise bleak show. Perhaps Cohle will stop drinking himself into oblivion and Marty will actually begin to treat his wife and kids like people who matter.

True Detective offers the best and worst of a TV series. Let's do the best first.

McConaughey and Harrelson are brilliant in their roles. There characters are morally vacuous, but the show does not shy away from letting us see them at their worst. I don't know how other viewers processed the show, but I saw this as a sobering look at the price of evil. The actual crime felt like the background - it's the drama of Cohle and Marty that carries the show. Something inside each of them is terribly damaged, yet I found myself hoping, episode after episode, that they would turn around. When Marty finally dissolves into tears in the last episode as the weight of what he has seen shatters his bravado, that felt right. He is a man whose life could change if  he learned to tell the truth.

On the other hand, HBO in not AMC. AMC raised the bar on basic cable with The Walking Dead and Breaking Bad. They managed to tell grim stories within the confines of what I assume to be the equivalent of a PG-13 rating. HBO is not constrained in the same way. I can understand the relentlessly crude language (which is not the same as saying I think it was necessary) but the nudity and/or sex just didn't need to be there. We get it - Marty is sleeping around, and he meets every other person in a strip club. He's a jerk. At some point, a show about the bad men who exploit and use women becomes a show that exploits and uses women.

As the final episode ends, Marty claims that though the universe is full of darkness, the light is winning. It was a great line. I too believe that darkness will be defeated in the end;  I just don't see how True Detective provides any reason for me to think that's true. It seems to me that true detectives would be as passionate about dealing with the source of the evil within them as they are about stopping the evil around them. But perhaps that is for Season Two.
Posted by Anthony at 3:53 AM