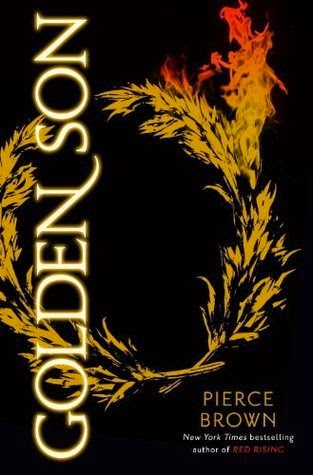 Red Rising introduced us to a universe stratified like Plato’s Republic, one in which the genetically and artificially enhanced Golds (the philosopher/kings) mercilessly subjugate all other classes. It’s the ancient pantheons writ large in science fiction, a retelling of classical mythology set several centuries into the future. This time the gods are not formed from mankind’s imagination; they are carved from our scientific hubris. Like the mythological gods (and today's comic book superheroes), the Golds embody mankind’s greatest strengths and weaknesses.

“Gold was meant to shepherd the other Colors, not devour them,” Lorn says, yet devouring is what they do best. “Now we are trapped again in that cycle, the very thing we endeavored to avoid. So the Society? The beautiful sum of all human enterprise? It’s been dead and rotting for hundreds of years, and those who fight over it are but vultures and maggots.”

What’s left, then, for the vultures and maggots fighting over the corpses of humanity’s better angels?Karnus tells Darrow, “All that we have is that shout into the wind— how we live. How we go. And how we stand before we fall… So you see, pride is the only thing… Pride, and women.”

The Golds have no moral center from which to draw inspiration or guidance, and there is no reason to believe they will ever find something more compelling than shouting about pride and women into a wind that will inevitably blow them all away. Augustus is a bit more philosophical in one of his speeches to Darrow:

“There is no supreme being waiting to end existence when the last man breathes his final breath . Man will end. That is the fact accepted, but never discussed. And the universe will continue without care… I would make man the immutable fixture in the universe, not just some passing bacteria that flashes and fades with no one to remember.”

Darrow realizes at this moment that “there is no morality to [Augustus]. No goodness. No evil intent … He believes he is beyond morality. His aspirations are so grand that he has become inhuman in his desperate desire to preserve humanity.”

It’s a future in which humanity’s ruling class have the bodies of gods and the morals of Neitzsche. It’s a world in which the vultures, maggots and passing bacteria of humanity build a glittering, empty, golden society on Bertrand Russell’s unyielding scaffold of despair. Darrow sees this – he knows this is not what Eo meant when she challenged him to ‘live for more’  - yet the longer he masquerades as a Gold, the more the Red disappears in the glittering, intoxicating light of power and glory. Even when he sees what’s happening, he seems powerless to stop it.

"I’ve never killed men with so little regard…There is no ambiguity here, no violation of moral creed. These people are war Colors. They kill me or I kill them. It’s… simpler that I don’t know them, that I don’t know their brothers and sisters, that I use metal instead of my own flesh to drive them through death’s dark door. I am good at it, better by worlds than Sevro, and that terrifies me above all else. I am the Reaper. Whatever doubts I had in myself fall away and I feel the stain creeping over my soul.”

That corrupting stain spreads beyond the scenes of battle. Though he finally sleeps with Mustang, Darrow acknowledges, “I had not given her all of me. I had not shared all that I am. Greedily, I kept secrets. And how could someone like her, someone with so much self-worth, bare herself and throw her heart at a man who gave so little in return?”  How could she? By falling for the Darrow he pretends to be. He’s good at playing that game too. Darrow tells a Blue, one of the slave Colors, that one way to beat a monster is to become one. By this point in the story, he is in a position to know. Mr. Brown said in an interview that "he [Darrow] would do nearly anything to bring their unjust reign crashing down; but will he become more monstrous than they ever were?"

“Achilles let his pride and rage consume him, and in the end, an arrow shot by a Pixie took him in the foot. There’s much to live for besides this. Hopefully you’ll grow old enough to realize that Achilles was a gorydamn fool. And we’re fools all the more for not realizing he wasn’t Homer’s hero. He was a warning. I feel like men once knew that.” - Lorn, to Darrow


Lorn's caution to Darrow captures the heart of Golden Son. Darrow eventually realizes that every decision he makes has consequences he can't see and a ripple effect of destruction he can't justify. He's Midas, killing everything around him with his golden touch. He’s Icarus, flying too close to the sun of a society that torches everyone whose hubris takes them too high. He's Ender - no, he's worse, because he knows it's not a game.

Darrow's not a hero simply because he is smarter, braver, and stronger. His means aren't suddenly justified because his ends are better than the monsters around him. The 'more' that he live for matters. Darrow the Red was a hero; Darrow the Gold is a warning. We often fail to understand this distinction in those we admire. Golden Son reminds us why we must.
Posted by Anthony at 11:58 AM