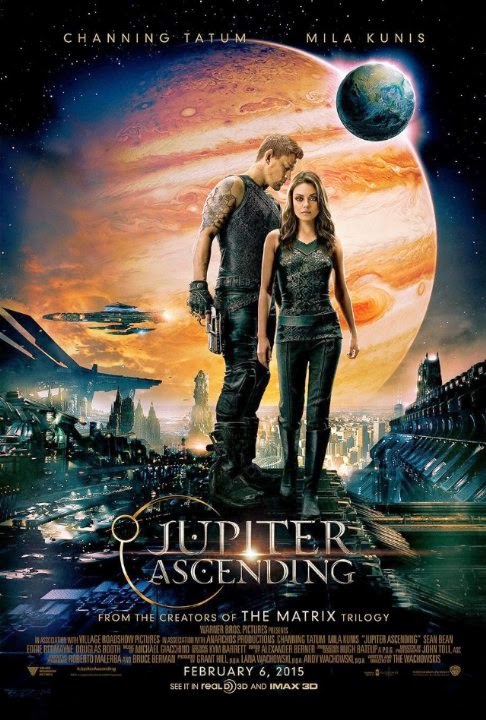 Jupiter wakes up every day muttering, “I hate my life,” and falls into bed exhausted not only from the hard work she does with her mother, but also from the bickering and selfishness of her extended family. No one in her life seems to care about her, and nothing around her suggests her life will ever change.

One day she discovers she is actually royalty, a reincarnated Queen of Earth caught up in the midst of an intergalactic war. If that seemed like an abrupt jump in the plot, then I have captured the movie's presentation well. When she insists it can’t be true because she just cleans toilets, a character named Stinger - who did not see Batman Begins - responds, “It’s not what you do. It's who you are.”

A warrior, Caine, has been sent to find her and fight for her to the point of giving his life. He’s a Splice, a mixture of human and wolf bred for war and chaos, but he’s fighting hard to put away his instability and anger. He’s the “bad boy” – yet he’s not. Though he thinks he’s fated genetically to always be dangerous, he is noble, brave and true in spite of what his creators intended. What others intended for ill ,he uses for good. He does not take advantage of Jupiter. He keeps his word. When he is betrayed, he does not lash out in revenge.  He has skeletons in his closet, but he has committed himself to making it right, and he will die in the service of Jupiter and others for whom he cares.

She falls for him, of course. It's a modern Cinderella story after all. But where many stories would throw them in bed together, this one allows him to honor her to the point of accepting her apparent rejection without compromising his commitment to protect her.  Eventually she moves beyond simple infatuation and into a deeper appreciation. He's not just strong; he fights for the right things. He's not just brave; he's virtuous. He's not just desirable; he's safe.

Even as she realizes that she is a vital part of something bigger than herself, she also realizes that the allure of power, wealth and privilege is an empty shell without the character and integrity needed to live well.  One of horrors she discovers about this intergalactic empire is that the ruling class lives for centuries by harvesting people so they can continuously remain young. The villain, Balem (her former son - just…never mind), tells her that some lives matter more than others. She is wise enough to see through his persuasive lies. When she has to choose between saving her family and saving Earth, she chooses amidst her tears to save Earth. It's the right call. It takes a great love to lay down one's life; it takes an astonishing one to lay down the life of those closest to you when it's the only way to do what's right.

In the end, she discovers that the greatest must be the servant of all. Balem had scoffed, "My mother never cleaned a toilet in her life." Jupiter responded, "Maybe that was her problem." Without telling her family that she is the queen of Earth, she returns to the most menial of tasks with a renewed appreciation for her family and her life. She doesn't need status, wealth or power to live a meaningful life. The most ordinary of lives can come alive when love, honor, and integrity are present. As is Caine, which certainly helps.

Just to reiterate - Jupiter Ascending is a dazzling mess in a lot of ways. Yet it also reminds us that our history is not our destiny; that goodness can triumph even in the face of great evil; that we can choose to be selfless, virtuous and good even when our family of origin or our genetic history suggest that we are at the mercy of fate. That's not a bad message to take away from a silly Friday night popcorn flick.
Posted by Anthony at 10:22 AM