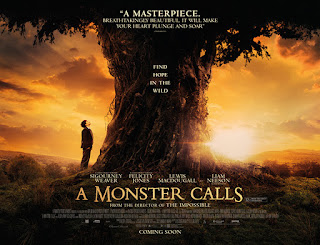 The monster’s stories are meant to prepare the boy for what is inevitable. When I first read the book, the stories confused me, but as I watched the movie’s depiction some pieces fell into place. Here’s my theory for what it's worth. The stories are about some of the greatest fears in universal human experience: Life is unfair (the first story), hope and faith can be lost (the second story); and we will never matter (the third story). [1]


As we see the boy address these fears, he is brought to the fourth story: acknowledging how he feels in the midst of his mother’s looming death.  That story must be told. He finally tells the monster the first part: he wants his mother to die. The anguish and uncertainty is too much, and he needs resolution. He eventually tells his mother the crucial second part: “I don't want you to go.”

I remember that tension as I watched my father waste away from pancreatic cancer. It crushed me to watch the progression of the cancer, and there was a selfish part of me that just wanted it to end. But balancing that was the much stronger emotion that I never actually voiced to him: I did not want him to die.

When I read A Monster Calls the first time, thirteen years after the death of my father, I wept like a child.  Somehow, Mr. Ness captured the fear, anger, heartbreak, and hope that ebb and flow in circumstances such as this. Reading it brought a catharsis, a cleansing of tear ducts too long left unused, a purging of some unresolved feelings that maybe I grieved too much and too long, a burning away of some lingering walls I kept between my life and my loss. I was undone for day, but that was long overdue. It’s after we clear the rubble that we begin to truly rebuild.

As a Christian, I find my ultimate source of hope and peace in Jesus, and in the promise that (to paraphrase Tolkien) one day all that is bad will be undone. However, this kind of modern fairy tale offers something very important that walks hand-in-hand with my eternal hope: a cathartic honesty, a deep empathy, and a vision of community that can be experienced in a broken and beautiful world.

[1] A friend noted that the first story is about the grandmother, the second about the father, and the third about the son.
Posted by Anthony at 8:41 AM