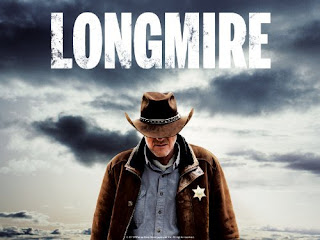 Katie Sackhoff, who playsVic, has said in numerous interviews that she likes how Vic is strong and put-together. That was my first impression too, but it sure seems like she has been doing a slow implosion for five seasons. It’s hard to watch, because she is a character that evokes a lot of admiration and sympathy. She is smart and good at her job. She survives kidnappings and other sundry troubles with admirable toughness. In that sense, she is strong; it's her interior life that is a mess.

Her husband, a decent man, doesn’t last: she prioritizes her work over him; she doesn’t communicate well to clear up murky situations; at one point, she smirks at how weak he is just as they are preparing to have sex. When he leaves we don’t blame him even as we feel bad for Vic, who can’t seem to control her self-destructive tendencies. By the end of the fifth season, some of her bad choices have caught up with her. We don’t cheer – it’s not that we want her life to be hard – but we do recognize that she is reaping what she has sown. She’s lost, lonely, and self-destructive, and we long for her to find goodness.

Henry is the kind of man to whom you would entrust your life and your family. He’s got his own moral blind spots, but he is kind, fair, and committed to stopping all the wrongs that he sees. Unfortunately, he may be overcommitted. It turns out that the good intentions of vigilantes are not enough to balance out the illegal nature of what they do – and the compromises they must embrace. We never question that Henry’s heart is well-intentioned; we are, however, increasingly uncertain about the means by which he achieves his noble ends.

For the first several seasons, Walt Longmire is a very compelling protagonist. He’s mourning a recently deceased wife. He’s steady, virtuous (in a secular sense), and committed to truth and justice. He’s good at what he does. He navigates the tension between his department and the law enforcement on the Cheyenne reservation relatively well. He’s the guy you want to have in charge of your town.

Walt finishes Season Five as an unlikable guy. His quiet, cryptic, cowboy approach to being the sheriff worked for a while, but now he’s just grim, rude, and seemingly dedicated to pushing everyone around him away. He tries to bounce back from his wife’s loss, but only manages to hurt the women he’d like to love. He stands for justice under the law, but he’s hiding a dark secret about injustice outside of the law. He is beginning to look like an unhinged Captain Ahab of the plains, fixing his megalomaniacal gaze on Jacob, who increasingly seems to be underserving of Walt’s ire.

He’s bottled up too much for too long. He's hardened his heart. He’s stopped seeing the good and people and zoomed in on the bad. He lives in a dark, cold world of conspiracies, sabotage and revenge. When his daughter gets shot, he never asks her how she is doing. When she points this out, he just walks away – leaving the much despised Jacob to be the father he’s not. Walt has long been mired in depression and anger, and his actions are ensuring that his bleak view of the world comes true.

* I generally don't critique details. For a review that covers more specific material, see Plugged In's review.
Posted by Anthony at 7:06 AM