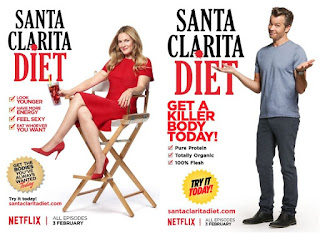 The envy and awe inspired by the “new and improved” Sheila is the source of Santa Clarita Diet’s sharpest satirical barbs. The neighbors marvel at and copy her impulse purchases and bullish behavior, blissfully ignorant of the body count that comes with it. (Can’t make a zombie omelette without cracking a few consumerism eggs)… The show also raises some tough questions about how far the Hammonds are willing to go to keep Sheila fed, but it’s not really interested in the moral implications of the answers. Piling skeletons into the family’s closet, the writing opts for a situation that increases narrative tension over one that enriches its characters.  - avclub.com

Joel’s immediate acceptance of his new, uh, situation is the choice that makes Santa Clarita Diet what it is: a comedy about a couple just trying to keep their lives together, even if it means ending others. And so, after trying and failing to set Sheila on a raw animal diet, the Hammonds go about trying to find people who really deserve to be killed and eaten — a plan which obviously goes horribly awry almost every time. As new complications arise, Santa Clarita Diet gets more and more interesting in terms of setting its moral compass. Joel and Sheila’s acceptance of their evolution into murderers sets off a disturbing chain of events. They even spark an existential crisis in their daughter, who justifiably can’t understand how she’s supposed to go on with life as usual when her undead mother is making meals out of rude men. - vox.com

Let’s grant that the show has at least the potential to offer a social critique in line with what some of the more intelligent uses of horror have done (The Babadook; Warm Bodies; Scream; The Cabin In The Woods; The Night Of The Living Dead; The Addiction; Black Mirror). The premise certainly offers a foundation on which to offer insightful commentary on suburbia’s nihilistic heart. However, not everyone is convinced it works:

In one sense, the show’s lack of broader ambitions simply reflects the very limited worldview of its characters, people who—because they only want to live the best version of the lives they’ve been living, zombie or no—have a distinct lack of awareness of anything outside of themselves. The crisis of becoming a literal actual zombie is not theological, existential, or civilizational; it is personal, the only thing there is for them. But because the show does not expand outside of their perspective, the show does not become a metaphor for consumerism, racism, terrorism, sex, pandemic, or anything else that zombie stories have traditionally allegorized. And though it mocks its characters with the same gentle irony that they mock themselves—and note how often they do mock themselves, a self-awareness that is actually self-absorption—the show is, ultimately, what it is and nothing more. - lareviewofbooks.org

This is my problem with Santa Clarita Diet – well, this and the remarkable level of gore and swearing: Whatever message the writers may have intended is murky at best and entirely lacking at worst. "The crisis of becoming a literal actual zombie is not theological, existential, or civilizational; it is personal, the only thing there is for them." Agreed. There is no big picture. All that matters is that their self-absorbed family figures out what's best for them. Before the season ends Sheila has already turned someone else into a zombie. But, hey - he's finally found the freedom to pursue his dreams, so... let's call it good.

I feel like I am giving the writers too much credit if I suggest they were writing about the profound lack of a moral center in American culture that, given the proper situation, would find its fruition in the justification of truly terrible things. I suspect it's just a zombie story that serves as a vehicle for shock humor.  Sweet Drew Barrymore as a foul-mouthed cannibal? Hilarious!

Cultural critic Philip Reiff's once wrote, “Every true culture expresses and celebrates the power of re-creation [mimesis].”  If Reiff is correct, 'false' cultures are those that de-create. How doe they do this?  The quest for creativity and innovation becomes so strong that it tramples the moral, cultural and religious norms of society. The problem is not so much that art is attempting to be fresh but that it is purposefully attempting to undermine that which is virtuous.

Rieff claims that our sense of identity comes from our grounding in the moral and social norms of fixed communities - when we know where we have come from, we see our place in the story of life. When art de-creates a community by destabilizing its history, morality and customs, it destabilizes individuals. People don’t know who they are or ought to be. This loss of identity results in a destabilization of those who are existentially lost. When identity is gone, bad things happen. The late Neil Postman wrote in Amusing Ourselves To Death:

Santa Clarita Diet is not satire as much as it's subversion. And it’s the kind of subversion that takes an image (of both suburbia and Drew Barrymore) that we generally associate with goodness and life and twists it so that it becomes merely a veneer for evil and death.

Or maybe it’s not satire or subversion. This idea troubles me even more. Maybe it’s an unintentionally insightful look at the moral emptiness that haunts us. How television stages the world becomes the model - or the reflection  -  of how the world is staged. What was meant to be a biting satire accidentally turned into a gruesome revelation of the vacuity of the American soul.

I once heard Breaking Bad's Vince Gilligan talk about how he created an anti-hero in Walter White as a kind of experiment to see how long it would take them to lose their audience. He was shocked when he didn't. White was meant to revolt people, not build a fan base. Part of me hopes Santa Clarita Diet was a test: will this be too far? Even The Walking Dead is pulling back on the violence for the second half of this season. Based on the reviews I've been reading, it's not too far. It's easy to 'always leave them wanting more' if the audience is insatiable.

If there is anything remotely redemptive in the show, it’s that Joel appears to slowly be losing his mind as he aids and abets in increasingly terrible things. The last episode seems to imply that he is being treated as insane because of all the things he’s trying to explain. Is he out of his mind? I suspect he is – who wouldn’t be - but only because he lost his soul a long time ago.

“What won’t we do?” Joel wonders as their killing spree mounts. All Sheila can come up with is that she won’t wear fur or eat truly distasteful parts of people. It’s a short list.

It also made me wonder, “What kind of show won’t we make?” That list seems increasingly short too.
Posted by Anthony at 11:37 AM