"They treated my people's wounds superficially, telling them, 'Peace, peace,' but there is no peace." (Jeremiah 6:14) 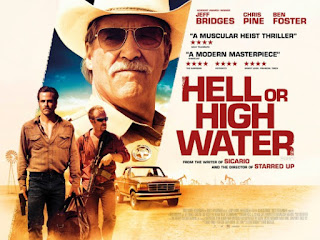 Hell Or High Water deserves the acclaim it has received from both critics and viewers. Here's a brief plot summary courtesy of Rotten Tomatoes:


Texas brothers--Toby (Chris Pine), and Tanner (Ben Foster), come together after years divided to rob branches of the bank threatening to foreclose on their family land. For them, the hold-ups are just part of a last-ditch scheme to take back a future that seemed to have been stolen from under them. Justice seems to be theirs, until they find themselves on the radar of Texas Ranger, Marcus (Jeff Bridges) looking for one last grand pursuit on the eve of his retirement, and his half-Comanche partner, Alberto (Gil Birmingham). As the brothers plot a final bank heist to complete their scheme, and with the Rangers on their heels, a showdown looms at the crossroads where the values of the Old and New West murderously collide.

Hell Or High Water is an exceptionally well made film: great cast, sharp dialogue, an excellent soundtrack, and a camera that captures the geographical and economic desolation of a place losing both direction and hope.

Of course, nailing the craft of filmmaking is only one kind of excellent. I view my entertainment through the rubric of good, true and nobleL is it made with excellence; does it tell an honest story about the world; and does it make me want to be a better man? I obviously think it's good, so let's consider true and noble.

Is Hell Or High Water true - Does it tell an honest story about the world?

Absolutely. It's like watching the book of  Ecclesiastes unfold in the midwest. It's not hopeful, but it's honest about what life looks like when measured by money, sex and power. I found myself rooting for the protagonists not because they were good guys - Tanner in particular is most definitely not - but because they are so desperately in need of a glimmer of hope. They are overwhelmed by life: work is hard to find; banks are bullying small farmers into the ground; the Big Oil that makes some rich drives others into poverty; their families are either dying or deserting them. There is nothing that brings them peace. Vanity, says the Preacher. All is vanity.

They want to be modern day Robin Hoods, robbing the bank barons for the cause of the struggling poor. Plenty of their neighbors quietly admire them for it. Yet good people die; tellers are terrorized; their children who are ashamed of them remain ashamed. There may be honor among thieves, but dishonor is their legacy. That's an honest look at the wages of sin. There are moments that seem glamorous and exciting, but those moments blow away like the dust that scours the haunting land.

Is Hell Or High Water noble - Does it make me want to be a better man?

Everything is falling apart. The desire for revenge is pushing them towards calamity.  They use and abuse innocent people. Their single-minded focus leaves a trail of violence, death, and fear. When Toby asks Tanner how he has stayed out of prison for a year, Tanner says, "It's been difficult." It's a funny line, but only because the delivery was great. Considering what we've seen Tanner do just in the few days captured on the screen, he is a profoundly bad man. Toby may once have been a good man, but he's sold his soul now. Even Marcus, who has a strong commitment to justice, can't seem to stop committing the small injustices he subjects his partner to every day.

In seeing them, we are reminded that this cannot be us. This must not be us. Tanner wants to go out in a blaze of glory, but he dies alone in a barren desert while his ignominious end plays out on the screens of a horrified viewing audience. Toby squanders his honor and integrity on revenge; he keeps the farm, but it does not heal his broken marriage or repair his relationship with his children. Something about gaining the world and losing your soul comes to mind.

The movie gets its title from the deadline to pay the bank in order to avoid foreclosure: "Come hell or high water, get the money to the bank on Thursday and then you are free and clear." But that's a lie - or at least, it's only part of the truth. In the most important sense of the words, Toby is not free. He's not clear. His actions haunt him. Marcus continues to remind him of the truth of who he is and what he has done even though the law will never convict him. Vanity, says the preacher. Chasing after the wind.

The end of Hell Or High Water suggests that at least one more person is going to die. When the ranger stops by to confront him with all of his questions and accusations, Toby says to him, "I know where you live. Why don't I stop by later; perhaps I can give you peace."  The ranger responds, "Or perhaps I can give you peace." Somebody is going to die.

Peace, peace, but there is no peace.

If nothing else, Hell or High Water makes us long for it. And that's not a bad thing.
Posted by Anthony at 8:19 AM