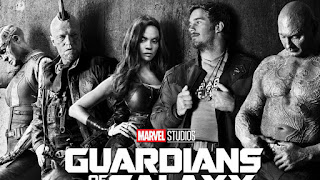 I long for heroes who are brave, pure, good and true. In Guardians, you are not going to get the full list. There are no King Arthurs or Captain Americas. There are instead people like Peter Quill who, when offered good and bad, will choose to do a little of both. Such is life. I would like to see a story that shows a trend in the characters toward the good not just in their deeds but in their hearts; Guardians Of The Galaxy at least gets us to long for it.


Second, it’s a move about fathers and family. I was moved by some moments that revealed the vital role a father plays in a child’s life. No amount of justification could have let Ego off the hook for leaving Peter’s mom pregnant and alone and sentencing his son to a fatherless life. We learn in hindsight that Yondu was not quite the villain we thought he was in GOTG1. He was Peter’s daddy. He saved him from the egomaniacal Ego; he raised him – roughly and crudely to be sure, but he raised him. He probably even loved him. Peter loves him too, as we see at the end of the movie. Peter never knew his father and had no family – and yet he did. The Guardians are his proxy family; Yondu was more of a father than Ego could have ever been.

And the relationship between Gamora and Nebula? It turns out Nebula has endured horrors beyond our ability to appreciate, and there is a case to be made that it was Gamora’s fault – Gamora, who was a child when the abuse happened to Nebula, doing what she did out of fear of their terrifying father. And yet there is hope. There is honesty, and then forgiveness. History does not have to be destiny.

The themes of community and purpose kept popping up as well. That’s one thing I like about both of the GOTG movies: they embed some meaningful moments that anchor what could become merely a silly, entertaining space romp.

I didn’t love everything about GOTG2 (this may seem picky, buy I notice these things). It was unnecessarily more deserving of its PG-13 rating than the first. It did nothing for Yondu’s character or the story arc to show him with sexbots. Considering the quality of the writing in both movies, some of the jokes in GOTG2 felt juvenile, made purposefully crude for cheap laughs. Those things undermined what I experienced as an otherwise strong and enjoyable story. There is also a scene of mass slaughter that was unsettlingly almost happy. A simple change of music would have added some gravity to a moment that ought to have left us disturbed rather than amused.

Nonetheless, GOTG2 continues in the tradition of GOTG1. That’s a good thing overall. I can get behind a story of flawed nobility, re-purposed lives, family, forgiveness, community and a sometimes sketchy fight for the good in the midst of much that is profoundly evil.
Posted by Anthony at 11:13 AM