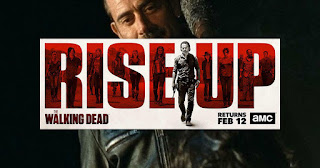 That chilling phrase keeps ringing in my head. There is something about it that captures the true horror of The Walking Dead: not the undead, but the living who had died inside long ago.

It’s a declaration of total domination. We see those who are parroting this phrase only to avoid torture, death, or the death of someone they love, and we know that their fear is mesmerizingly complete.

It reveals the total abdication of individuality and autonomy. Many of Negan’s people embrace their loyalty. There is something chilling in the idea that someone could be so controlled by another that they willingly give up their sense of self.

It’s a total pledge of allegiance. Anything and everything will done in Negan’s name with no thought about the morality of it – and it is.

It’s a claim to community. A terrible community to be sure, but a community nonetheless. There is instant association when Neegan’s name is dropped, instant authority, instant (begrudging) respect, instant membership in the morally bankrupt fraternity of Negan. 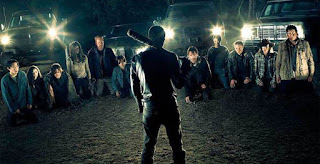 It’s a sharp contrast to what we see in Rick’s company. They are all very different in personality, character and worldview, yet they find a way to build true community. Rick is Rick, Michone is Michone, Darryl is Darryl. We don’t want them to be clones. We see the need for unity in diversity. It’s in the tension between them that truth, goodness and maturity emerge.

Really, Negan leads a group of zombies that are more terrifying than the actual Walkers. They have been condensed into their basest form, winnowed down to greed, lust, fear, and anger, and driven by an insatiable need to ravage and consume. Unfortunately, they have the intelligence and resources to commit far greater atrocities than Rick and his band have seen in what's already a cold, hard world.

Rick, on the other hand, leads people. Real people. Flawed, gentle, angry, vengeful, forgiving, hopeful, despairing, violent, kind, hateful, loving people. That’s why Rick and his allies need to win the upcoming war against Negan. It will be hell – all war is – but the other option is for the whole world to be Negan, and that will be far worse.

If there is one thing that TWD does well, it is to highlight the importance of being human. The zombies are an obvious contrast while the Negans are the more nuanced ones. To be human is to love; to philosophize; to exercise moral agency; to wrestle with God; to choose nobility and honor over compromise and despair; to cling to hope when all hope seems lost; to fight for what is good even if it comes at great cost.

From Terminus To Alexandria (The Walking Dead Season 5)
Who Are We? (Reflections on The Walking Dead, Season 4)
When Humans Lose Their Humanity: "No Sanctuary" and the Real Horror of Terminus
"Life Is Always A Test": What The Stumbling Living Can Learn From The Walking Dead
Leviathans and Zombies: Social Contracts and The Walking Dead
Absurd Heroism: Camus and the real Walking Dead
Much Undead Ado About Nothing
Desperate Human Beings
Deconstructing Humans
The Zombie Thread: Extinction Event Ethics
How Do You Solve a Problem Like A Zombie?
Walking Bad: Zombies, Meth, and Mesmerizing Nihilism
Posted by Anthony at 5:46 AM