It is indeed a barrage of frantic editing, sometimes confusing flashbacks, anachronistic music, and derivative plot lines and images. It’s basically a rags to riches tale with a Merlin, Uther, Arthur, a mage that is supposed to be Guinevere, and a multicultural assembly of thieves and rebels who are just waiting to become knights. Oh, and an amazing sword; something that reminded me of the eye at the top of Barad-dur; black riders; a beheading moment that must feel really unfair to Eddard Stark; and various monsters, sprites, and ghostly beings.

But it is also a highly entertaining and clever retelling. If you aren’t interested in the original story being altered, read no further and definitely don’t watch the movie. If you are up for a new twist on an old legend, you might enjoy this movie as much as I did.

In the opening sequence, monstrous elephants with buildings on their backs attack a huge castle. When Uther defeats the evil mage behind the attack, he does so with the magical power of Excalibur. In the first ten minutes, we know this is not the England or France of Arthur’s origins. The language and some of the settings are there, but this is solidly in the realm of myth.

Ritchie is building a new world, one in which the line between mysterie and veritae (to use Simon R. Green’s language) is definitely blurred. Battles often occur in both this world and another world simultaneously. Visions intertwine with reality. This is not meant to be a world of science, and the story makes no attempt to offer a linear, step-by-step exposition. Ritchie’s not building on a canon; he’s starting another one in an alternative reality.

If you are okay with this, you can probably settle into the rest of the story.

Arthur is an orphan raised in a brothel. He learns how to succeed in the school of hard knocks, and against all odds develops into a young man with a strong sense of honor (granted, it’s honor among thieves) and loyalty as well as remarkable skill in all forms of combat. 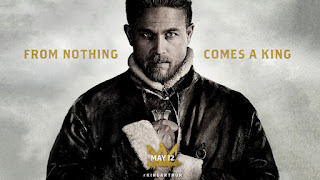 When the king, Vortigern, holds a contest to see who can pull Uther’s sword from a recently uncovered stone, Arthur is as shocked as the rest of them when he succeeds. Though the audience knows it, he had no idea he was son of Uther and the rightful king. He soon discovers that Vortigern, his uncle, is a profoundly wicked man who willingly traffics with evil and commits horrible atrocities to gain power.

Vortigern is addicted to it, intoxicated by the fear he fosters with his brutal power. He sacrifices three family members in exchange for power - and as Arthur discovers, that included Arthur’s father, Uther. Arthur has blocked this childhood memory, but in order to master the sword he must unblock this and enter into his grief. He doesn’t want to, but as the Mage notes, facing those fears is what separates men from kings.

Arthur defeats Vortigern in the end, of course. It’s how this kind of myth works.  He notes that the assassination of his father, which led to his being raised as he was, was actually the very thing that prepared him to fight and defeat his uncle. What Vortigern meant for evil, something or someone intended for good.

Unlike Vortigern, Arthur does not desire power. He’s never had it; why should he fall in love with it now? However, he’s willing to do what he has always done, and that is wield it as a tool to bring about justice and peace. He soon begins construction on the Round Table. The boy who grew up under the tyranny of power is already planning how to free others from the bondage that follows the corrupt use of power.

Is Arthur a good guy? That’s a complicated question. Yes, he’s grown up as a thief who protects the business interests of a brothel. Considering all the influences in his life up to that point, he has done a remarkable job rising above the many things that should have turned him into a terrible human being. He is the most moral man in an immoral world. The is low, but he’s the one raising it. That’s worth something.

Unlike the traditional Arthur, he doesn’t ascend to the throne because he loves the idea of a noble calling to lead the people. He fights Vortigern because justice must be served for all those Arthur loved and Vortigen killed. In that sense, he fights for himself, yet in that motivation is the seed of something greater. He has always fought for those around him who felt the touch of evil; now he’s going to do if for a kingdom.

He’s not a guy who brings the kind of Arthurian nobility we have come to expect to the Round Table; he’s an Arthur who has unknowingly been groomed to settle into it when given the opportunity.

That, too, is worth something.
Posted by Anthony at 5:14 AM