This review will look at Kass Morgan's The 100. Ms. Morgan studied English and History at Brown University before pursuing a Master's Degree in 19th Century Literature at Oxford. She currently works in the publishing industry. In other words, even though this is her first YA novel, her training and credentials have prepared her well.

It’s been one hundred years since mankind decimated the planet through nuclear war. A remnant living on the Ark - twelve space stations linked as one -  have been waiting for the planet to become habitable again, but nobody really wants to find out first-hand. Meanwhile, life on the space station is falling apart. The original 400 has turned to 4,000, and oxygen and supplies are running down. The need to control the population has brought about severe social stratification, excessive capital punishment and draconian birth laws.

The solution is to send underage criminals awaiting execution on their 18th birthday. These kids are going to die anyway –why not let them die for the greater good? That’s the 100 – doomed juvenile delinquents  sent to earth as a scouting party. What could possibly go wrong? If you thought, “Pretty much everything,” you were correct.

I’ve heard it said that our culture’s stories confirm either what we fear is true or what we hope is true. If so, The 100 offers some interesting - and frustrating - insights into this generation’s hopes and fears. 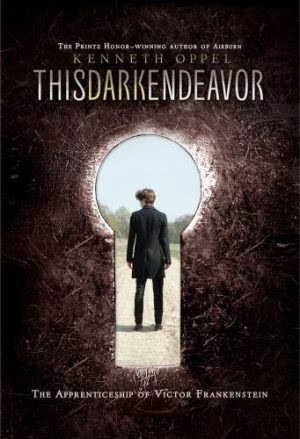 I was prepared to be disappointed. I am a fan of Shelley's classic, and I was concerned This Dark Endeavor would be a cheesy intro heavy on shock value and silly romance. How delighted I was to be wrong.