Threads of Victory in Tales of Despair 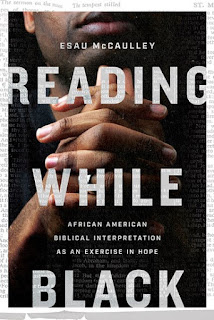 Esau McCaulley’s book Reading While Black: African American Biblical Interpretation as an Exercise in Hope is rightly garnering a lot of attention. It is a thought-provoking and important book. Rather than outlining or reviewing the entire book, I want to provides some excerpts from the second half of chapter six that have landed pretty hard on my heart.

Black bodies enter the laws of this land, not as persons but as an accounting tool to determine the voting rights of white men (the Three-Fifths Compromise). Before that we were mercilessly dragged from our native land and flung to the far ends of the world to be beaten, bred, raped, and degraded. Families were ripped apart and all the doors of opportunity were closed to us. We were despised and rejected by men, seen as cursed and abandoned by God. We were those from whom men hid their faces.

The year 1865 did not signal freedom, but simply the beginning of a different type of struggle. The years of reconstruction saw some expansion of Black opportunity. However Black bodies were again sacrificed at the altar of compromise in 1877 when, in exchange for the presidency, Republicans agreed to remove troops from the south. What followed was a series of ever-increasing Jim Crow laws that robbed Black people of dignity and opportunity.

And what more shall we say? For the time would fail me to tell of the lynching tree, the Red summer, the dogs and the water hoses, the sit-ins, Emmett Till, Medgar Evers, Martin Luther King Jr., the people who defied governors and presidents, braved mobs, and sang victory, people of whom the world was not worthy. The history of Black people in this country is a litany of suffering. Yet we are definitely more than this suffering. There is a thread of victory woven into the tale of despair...