Thinking From Behind A COVID-19 "Veil Of Ignorance"

John Rawls (1921-2002) argued that we could determine just ethical principles by seeing what a free and rational people would choose if they attempted to create a just society from behind a ‘veil of ignorance’.

John Rawls proposed a famous thought-experiment in which a group of humans come together and have to devise a set of principles for their society to work by. The imaginary part of this is that the individuals doing the deciding are told that there will be some people of greater and lesser intelligence, greater and lesser degrees of health, greater and lesser pigment in their skin, ability to lead, to follow, to carve wood, to care for babies, etc etc – in other words, these people would represent a reasonable cross-section of the types found in human society. However, the deciding individuals did not know which attributes they themselves possessed...

This ‘veil of ignorance’ Rawls thought would ensure a just distribution of rights and duties in his hypothetical society – just as if you were in charge of cutting up a pizza to share and only knowing that you would get the last piece: you would do your best to cut it equally. (“Deontological Ethics.” http://www.sevenoaksphilosophy.org/ethics/deontology.html)

Rawls thought that people would likely agree to things that would benefit the population no matter their situation: freedom of speech; a limited role for a government influenced by or answerable to the people; an equitable social system wherein people have equal opportunity, access to resources; a system that encourages virtue, etc.

With that foundation in mind, let’s apply that idea to COVID-19.

MemeTalk: Are We Being Conditioned To View Freedom As Selfish? 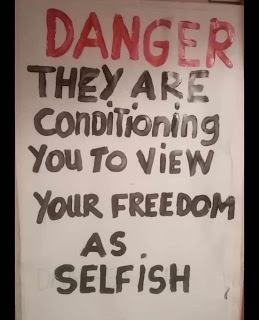 I've been seeing this commentary on life during COVID-19 pop up on social media. It got lots of virtual applause, and why not? Who doesn't love freedom? And who doesn't want to avoid being conditioned by "they"? It got me thinking about how we Christians wrestle with notion of freedom in general, especially our exercise of the freedoms guaranteed to us as citizens of the United States.
My thoughts are almost certainly incomplete and perhaps misguided, but I really think we need to wrestle more deeply with the broader theme that this meme addresses.
Read more »
Posted by Anthony at 6:46 AM No comments:

Person A wears a mask all the time, social distances, and sanitizes because they do not want to get the coronavirus.

Person B takes Vitamin D, some herbs, essential oils, and works on building their immune system naturally because they do not want to get the coronavirus.

4. Neither A nor B are living in fear.