The Historical Reality Of Jesus

I love the Facebook page “Did Abe Lincoln Really Exist?”  It’s a spoof page that takes the argument against the historicity of Jesus and applies them to Abraham Lincoln. One entry compared Abraham Lincoln, Mithras, Horus, and Dionysius under the heading “More in Common Than You Think”:

“Like countless others, all four were born on February 12, all were lawyers, all lived in a white house, all freed people from slavery, all were visited by wise men, all lacked a middle name, all were frequently called President, and all created a secret service. None of them existed.”

It’s funny, but it highlights a serious topic: Did Jesus exist? Is he who the biblical record claims he was? And can an accurate picture of the real Jesus truly emerge from history? With Easter just around the corner, this seems like a good time to address these questions.

There are a number of prominent perspectives on the historical veracity of Jesus, ranging from wondering if he existed at all to believing he is, indeed, the person the Bible claims. I will begin with those who are most skeptical.

Even though Bertrand Russell claimed this (and Richard Dawkins seems very excited about the idea) this idea is taken seriously by very few serious scholars. Bart Ehrman is a well known skeptic who does not believe Jesus was God and is highly skeptical about the reliability of Scripture. Yet on this issue he wrote:

“With respect to Jesus, we have numerous, independent accounts of his life in the sources lying behind the Gospels (and the writings of Paul) -- sources that originated in Jesus' native tongue Aramaic and that can be dated to within just a year or two of his life… Historical sources like that are is pretty astounding for an ancient figure of any kind.

Moreover, we have relatively extensive writings from one first-century author, Paul, who acquired his information within a couple of years of Jesus' life and who actually knew, first hand, Jesus' closest disciple Peter and his own brother James. If Jesus did not exist, you would think his brother would know it…

Moreover, aspects of the Jesus story simply would not have been invented by anyone wanting to make up a new Savior. The earliest followers of Jesus declared that he was a crucified messiah. But prior to Christianity, there were no Jews at all, of any kind whatsoever, who thought that there would be a future crucified messiah.

The messiah was to be a figure of grandeur and power who overthrew the enemy. Anyone who wanted to make up a messiah would make him like that. Why did the Christians not do so? Because they believed specifically that Jesus was the Messiah. And they knew full well that he was crucified. The Christians did not invent Jesus…”

In an entry called “Christ Myth Theory,” even Wikipedia (which has received a lot of criticism for having a somewhat hostile view toward Christianity) notes:

“The hypothesis that a historical Jesus figure never existed is supported only by a very small minority of modern scholars… biblical scholars and classical historians now regard theories of non-existence of Jesus as effectively refuted.”

Here's historian Gary Habermas on the historicity of Jesus:

2. “Jesus is a compilation of myths.”

A lot of other gods get connected to Jesus:

Books like Joseph Campbell’s The Hero with a Thousand Faces and The Masks of God, as well as James George Frazer’s The Golden Bough, reignited a modern dialogue by claiming that the stories of Krishna, Buddha, Apollonius, Osiris, Jesus and others were all connected.

Jewish scholar Samuel Sandmel calls this "parallelomania” –people see a similarity and then go “maniacal” in their attempts to create an overly zealous parallel connection in the stories. J. Warner Wallace, a former atheist, offers this comparison:

“What if I told you that a man named Morgan Robertson once wrote about a British ocean liner that was about 800 feet long, weighed over 60,000 tons, and could carry about 3,000 passengers? The ship had a top cruising speed of 24 knots, had three propellers, and about 20 lifeboats. What if I told you that this ocean liner hit an iceberg on its maiden voyage in the month of April, tearing an opening in the starboard side forward portion of the ship, and sinking along with about 2,000 passengers? Would you recognize the event from history?

You might say, “Hey, that’s the Titanic!” Well, you would be wrong. While all these details are identical to the Titanic, the ship I am talking about is the “Titan” and it is a fictional ship described in Robertson’s book called “The Wreck of the Titan” or “Futility” (Buccaneer Books, Cutchogue, New York, 1898). This book was written fourteen years BEFORE the disaster took place, and several years before the construction was even begun on the Titanic!

In other words, correlation is not necessarily causation - and in this case, there is good reason to believe it is not. There are at least four separate problems with the parallelomania of “dying and rising god” comparisons:

“When they say that Christian beliefs about Jesus are derived from pagan mythology, I think you should laugh. Then look at them wide-eyed and with a big grin, and exclaim, "Do you really believe that?" Act as though you've just met a flat earther or Roswell conspirator. You could say something like, "Man, those old theories have been dead for over a hundred years! Where are you getting this stuff?" Tell them this is just sensationalist junk, not serious scholarship. If they persist, then ask them to show you the actual passages narrating the supposed parallel. They're the ones who are swimming against the scholarly consensus, so make them work hard to save their religion. I think you'll find that they've never even read the primary sources.”

From J. Warner Wallace, "Is Jesus A Copycat Savior?"

3. “Jesus was real, but his resurrection was spiritual, not physical.”

The idea here is that a spiritual Jesus, or a real Jesus with a purely spiritual resurrection, would be sufficient for the Christian claims about salvation and resurrection. There are a number of things worth noting on this topic:

4. Jesus was real, but the documents recording his life and death are unreliable.

In this case, I will point you toward a number of resources that respond to this concern. From https://visualunit.files.wordpress.com/2010/12/nt_reliability1.jpg, comparing the Bible's literary timeline compared with other famous ancient documents. 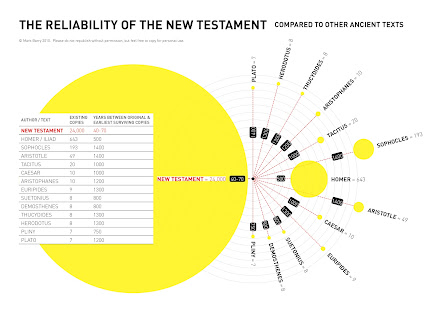 J. Warner Wallace talks about the chain of custody from the first writers to the councils that formally approved a biblical canon that had already been informally adopted by widespread and consistent church use: You will see J. Warner Wallace show up again in the following links that offer great resources on this question of the reliability of Scripture.

Four Reasons The New Testament Gospels Are Reliable
The Gospels are Historically Reliable: 6 Reasons.
Why The Ancient Christian Record About Jesus Is The Most Reliable
There Are Good Reasons To Believe The Gospels Are True, Even If The Eyewitnesses Waited Years To Write Them
Recent Perspectives on the Reliability of the Gospels

Here's J. Warner Wallace on the Reliabity of Scripture.

5. Jesus was real, and the biblical record accurately records his life life, death and resurrection.

The Jewish people had been waiting for a Messiah (a Savior) since King David. Time and again they ended up overrun and enslaved to other nations. By the first century, they had spent several hundred years convinced that the Spirit of God had been removed from them. They were waiting for a Messiah who would do two key things to fix this broken world: defeat the enemy and liberate Israel (in Jesus' day, that was Rome), and purify / rebuild the temple.  Plenty of people in that era claimed they were this promised Messiah.

So after doing all kinds of miracles to show He was who He claimed he was, Jesus’ crucifixion suggested that he was just another failed messiah. He had not freed them from Roman rule and had not restored the Temple as they expected. Now he was dead and his followers were hiding.

At this point, a number of theories have been offered to explain the account of the empty tomb. I will list them, as well as some responses.

The disciples would have needed to steal the body from Roman soldiers, who either fell asleep or were overpowered by the disciples, then kept this remarkable achievement secret (it's not recorded anywhere) while apparently reburying the body somewhere else - which meant they would have known their Messiah had failed in his mission.

2. Jesus Swooned Rather Than Died On The Cross, Then Escaped The Tomb

First, it is very hard to believe that he would survive a crucifixion. The Romans knew what they were doing.  Second, Jesus would have been almost mummified in linen strip soaked in spices - about 75 pounds worth of overwhelming scent (John 19:39) which would have combined for a, uh, less than hospitable habitat for recovery. But having beaten those odds, he revived, got loose, rolled the seals stone back from the inside, and got past the guards. The next day, a massively tortured, dehydrated, exhausted Jesus convinced his disciples he’d conquered death by appearing gloriously.

Hallucinations are, of course, a thing. However, they do not produce long, multiple-sense, multiple-witness appearances. An easy response by the Romans or the Jewish leaders would have been to march people to the tomb and produced a body. Which didn't happen.

All of these fall under the heading of conspiracy theories: the follower of Jesus were so desperate to not be exposed for their failed trust in a failed Messiah that they conspired to make it look like he didn't stay dead. Besides the fact that a conspiracy of this size would be enormously difficult to keep quiet, the change in the followers of Jesus following the emptying of the tomb is quite remarkable.

The early followers of Christ reordered key parts of their worldview, changed their view of God, and radically changed their way of life to the point of being willing to die. Why? What had happened to cause them to confidently make this claim?

“If we are to think in first-century Jewish terms, it is impossible to conceive what sort of religious or spiritual experience someone could have that would make them say that the kingdom of God had arrived when it clearly had not, that a crucified leader was the Messiah when he obviously was not, or that the resurrection occurred last month when it obviously did not.”  - N.T. Wright

It was more than a mere religious experience (though it certainly was not less). It was the actual, physical resurrection of Jesus landing with a thunderous and glorious crash in the middle of human history.

"Evidence For The Resurrection of Christ." Peter Kreeft

The Reason for God, Timothy Keller

The Case for the Resurrection of Jesus, Gary Habermas and Mike Liconna

Resources To Help You Defend The Historicity Of Jesus

The Skeptic Project: Zeitgeist (debunking the movie Zeitgeist, which is a hot mess)

AN ADDENDUM ON THE NATURE OF MIRACLES

“Miracles, if they occur, must, like all events, be revelations of that total harmony of all that exists... In calling them miracles we do not mean that they are contradictions or outrages; we mean that, left to her [Nature] own resources, she could never produce them… there are rules behind the rules, and a unity which is deeper than uniformity.” C.S. Lewis