It’s been fourteen years since First Night, the night when the world succumbed to the zombie plague. The survivors are mostly either citizens huddling in towns or  Bounty Hunters ravaging the Ruin. Benny Imura lost both his parents on that fateful day; when the story begins, he is trying to find his place in this post-civilized world. He hates his brother, Tom, whom he perceives as a coward who ran away when he should have stayed and fought for the lives of their parents.  Benny's world doesn't extend beyond his fenced-in community. He seems destined to live a pointless life in a stifling town, where the only thing worse than the hopelessness within the walls is the death waiting outside.

I really like this series so far (I've read the first two books).


On the one hand, there are guys like Tom Imura who embody all that is good and true. He is a Bounty Hunter who brings closure to families whose loved ones have turned. He takes letters to the undead from the families, reads the letters to them, then as mercifully as possible sends them to their final rest with the best solace he can offer. “Be at peace, brother,” he says to one of them as he severs his spinal cord.

He’s a Closure specialist, and he’s one of the good guys. He keeps his word, protects the innocent at all cost, treats everyone around him with respect, fights to preserve the good rather than to take revenge on the evil, and is realistic without being cynical. As he explains to Benny, “I've managed to stay alive out here in the Ruin because I'm a realist. I allow the truth to be the truth, no matter how much I might want it to be something else.” He's a mix of Aragorn, Jack Reacher, and Garet Jax. Yeah, I like him.

On the other hand, the villains in this series justify their horrific violence against both the living and the Undead in a way that sounds too familiar: As one villain notes:


“Hell, boy, I ain’t evil. I’m just the guy that’s in power. I’m a conqueror, like all them great kings and generals in history…  Boy, there are people who conquered half the world, slaughtered whole populations, wiped cultures off the face of the planet, and you know what history calls them? Heroes! … We’re a predator species, top of the food chain. Survival of the fittest is written in our blood, it’s stenciled on every gene of our DNA. The strong take and the strong make, and the weak are there only to help them do it…Right is whatever I decide it is.. power is the only thing that matters.”

Welcome to the world of Neitzsche. These moral monsters try to tap into a slogan that was worded differently before First Night: “What’s done in the Ruin, stays in the Ruin.” This is clearly not true. The carnage in the Ruin fuels the damage in their hearts. As Mr. Mayberry writes, “Civilization lives in our hearts and heads or it doesn't exist at all.”

While this series is grim, it is loaded with hope and goodness. You root for the heroes and cringe at the villains. It’s the way a good story is supposed to work. That’s not to say the characters are caricatures: they all carry scars; they all wound others. No one is above criticism. But in the midst of soul-crushing darkness the bright light of goodness shines.


“Often it was the most unlikely of people who found within themselves a spark of something greater. It was probably there, but most people are never tested, and they go through their whole lives without ever knowing that when things are at their worst, they are at their best.”


This story resonates for other reasons as well. 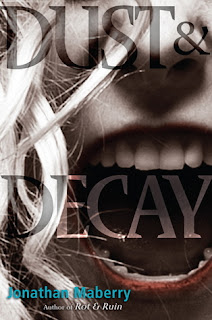 First, Mr. Mayberry has written a story that treats love and romance realistically while raising the bar. Emotions and hormones are a fact of life, but that does not mean that people reduced to impulses and feelings. The book chronicles several ongoing relationships, and all of them – I repeat, all of them – contained a realistic presentation of longing, hope, love, angst and boundaries. In a culture that treats women like so much dross, this is YA gold. Mr. Mayberry noted in an interview:


"Teens are very enthusiastic in their support of the series; and teen girls and adult women (ranging from librarians to mothers to teachers) all seem to have developed a crush on Benny’s older brother, Tom. That caught me off guard…after all, he’s a supporting character. Tom is a tragic figure to me, filled with the hurt of great loss and yet capable of holding onto his idealism and honor."

Is it any wonder women love him? When’s the last time a man treated them with idealism and honor in spite of his own woundedness? Though Benny is the primary protagonist, Tom is in many ways the heart and soul of the story, and he passes his worldview on to the others. When one of the younger boys is frustrated by the lack of attention the fairer sex sends his way, his buddies set him straight:


“Do yourself a favor, Morg. Next time you’re staring at a girl’s boobs, look up. You’ll be shocked to learn it, but there’s going to be a face up there. Nose, mouth, eyes. And behind the eyes is an actual person.”

At one point Benny says to his girlfriend, Nix, “I got you back safe. The monsters didn’t get you.” Benny does more than that, though. He continues to keep her safe, even from himself. He treats her with respect and compassion, maybe even with genuine love. It’s not always easy, but it’s always good.

Second, Mr. Mayberry provides a fair look at religion. There are some cult-like crazies. Yep, I would expect that. There are some skeptics; I would expect that too. As one man notes, “If there was a God, then he wasn’t on the clock that night. That’s something you can debate at Sunday school. For my part, I don’t see evidence of any divine hand in what happened.” That strikes me as honest doubt in the face of such horrific events.

But there are also admirable people of faith. Out in the Ruin, Tom works with Christians who care for the zombies (they call them Children of Lazarus) and pray for him as he goes on his missions: “God go with you and before you and within you…may God protect your heart out here in the world.” This even-handed approach seems to reflect Mr. Mayberry's worldview. He noted in an interview:


“My circle of friends range from the most cynical atheists to Right Wing evangelists. That said, if an apocalypse happened, AND if I was inclined to want to assign blame somewhere, I’d probably focus most of my attention on deliberate human action, human error, or human inaction. So… I doubt my religious beliefs would be affected, but I would be sorely disappointed in my fellow men.”

Third, he combines the stark recognition that life horribly damages people with the hope that our history is not our destiny. Lilah, the heart-breakingly lonely girl, asks the Greenman,“So is that it? Will I have to live the rest of my life like this? Not doing the right thing? Not saying the right words?" He gives a response we long to hear: "That's your choice. You can't change the past. Ah, but the future... you own the future.”

In Batman Begins, Rachel told Bruce Wayne, "It's what you do that defines you." Mr. Mayberry takes this a little farther: what you decide to do can change who you are.


“No matter what choice you make, it doesn't define you. Not forever. People can make bad choices and change their minds and hearts and do good things later; just as people can make good choices and then turn around and walk a bad path. No choice we make lasts our whole life. If there's ever a choice you've made that you no longer agree with, you can make another choice.”

That's a compelling message for those who struggle to see beyond their current circumstance. A review at bookpage.com said it well:  "Rot & Ruin ordains the younger generations with a sense of purpose and power, and a new understanding of what a hero really is.”