God Cares About Justice. So Should We.

I've been thinking more lately about what it means for a follower of Jesus to do justice and love mercy (Micah 6:8) on both a personal and a policy level. By personal, I mean how I do those things in my direct circle of influence. By policy, I mean how I use the power of my voice and my vote to promote political policy. Christians have dual citizenship in a Kingdom and an empire, and it's not always easy to hear the still, small voice that ought to be guiding us above the tumultuous crowds clamoring for bread and circuses.

It's frustratingly tense for evangelical Christians to talk about justice issues. The Social Gospel movement in the 1920s became mostly social with little gospel pretty quickly; Social Justice Warriors have turned the discussion of justice into a vehicle for Identity Politics and Marxist ideology. To many evangelicals, "social" and "justice" have become dog whistles signaling leftist, neo-marxist radicals to storm the doors of their local church.

Nevertheless, neither society nor justice was their idea. It was God's. God rolled out a vision for a just society through biblical revelation, starting with the Israelites in the Old Testament and moving into the church in the New Testament. As a Christian, I see a lot of issues to which the Bible speaks. Justice is many splendored thing, and while some of issues will be more prominent in the minds of Christians than others - and should be - all of them are worth considering. Justice remains a deeply biblical issue, and it deserves our attention. 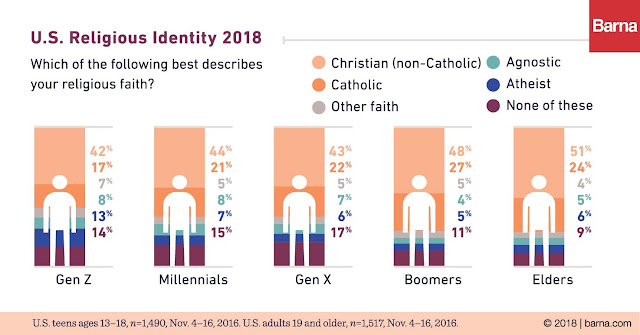 For the first time in, well, ever, a higher percentage of people are "nones" than in any single category of Christian. Evangelicalism has dropped from a high of 30% of the population in the mid 1990s to around 23% now. According to Lifeway, a steadily increasing number of people believe the Bible recounts myths rather than truth - while still thinking it's accurate and authoritative, which is counterintuitive. Considering how much the teaching has been deconstructed lately, I suspect the apparently positive upsurge has to do with reinterpreting biblical teaching.
Read more »
Posted by Anthony at 10:57 AM No comments: