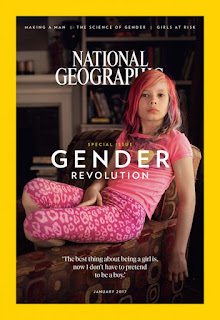 The current science has found no compelling evidence that gender dysphoria is a case of being “born that way.”  Genetic or epigenetic arguments offer only speculation based on circumstantial reasons, and an imbalance of hormones seems unlikely. Male to female transgender brains are not feminized. The y-antigen connection has been disproven. People may feel they were 'born that way' because they have had the feelings for as long as they can remember, but that is very different from saying there is a verifiable physical cause.

What is abundantly clear, however, is the role that nurture plays. Nurture is a broad term that includes a lot of complexities about how peers and communities affect one’s view of self and gender. Many boys report feeling ostracized because of ineptness at sports. In clinical settings, abuse rates as high as 80% have been recorded. Some feel like they don't fit in with their peers' expectations of gender-related appearances or activities; some are same-sex attracted and don't want to be perceived as gay, and they see switching genders as the solution. The rising number of young girls who are being diagnosed claim they want to be male because of the objectification and pornification they feel even at an early age.

Considering the role that nurture plays, it would seem prudent to explore what has been present in the environment of children that has encouraged them toward gender dysphoria rather than celebrate something that current research suggests is a response a troubled past.

TRANSGENDERISM IS USUALLY TRANSIENT IN CHILDREN

A child’s desire to be transgender is usually transient. For three-quarters of them (and perhaps as high as 88%), the desire will fade if there is early intervention. Study after study confirms this.
Dr. Kenneth Zucker, a psychologist and head of the gender-identity service at the Center for Addiction and Mental Health in Toronto, has noted:

“The fantasy solution [a full transgender transformation] provides relief but at a cost. They are unhappy children who are using their cross gender behaviors to deal with their distress. Treatment goal is to develop same sex skills and friendships. In general, we concur with those who believe that the earlier treatment begins, the better... It has been our experience that a sizable number of children and their families can achieve a great deal of change. In these cases, the gender identity disorder resolves fully, and nothing in the children's behavior or fantasy suggest that gender identity issues remain problematic."

Based simply on the clinical research, the best course of action for the vast majority of gender confused children is to offer treatment, not applause.

TRANSGENDERISM IS SOMETIMES DIFFICULT TO DIAGNOSE

There are a number of things that mimic gender dysphoria, such as autogynephillia, Body Dysmorphic Disorder, Dissociative Disorders, transvestitism, and internalized sexism. The children are in a tough situation, and they need help to find their way toward healing and hope. To quote Walt Heyer once again:

What researchers have found is that a majority of transgenders have at least one psychiatric co-existing (co-morbid) disorder, the most prevalent being major depressive disorder, specific phobia and adjustment disorder…What researchers have found is that 30 percent of gender dysphoria patients have a lifetime diagnosis of dissociative disorder (formerly called multiple personality disorder). Dissociative disorder and gender dysphoria appear very similar, and clinicians often cannot distinguish between the two in the transgender patient.

I think psychologists quickly default to the diagnosis of gender dysphoria and don’t consider the possibility of other disorders. I know: this is what happened with me. The most highly regarded gender specialist in the nation diagnosed me with gender dysphoria. He told me that I was a transgender and recommended that I undergo surgery to transition from male to female. All my discomfort would go away after surgery, he said. He was wrong.”

There have even been cases where other co-existing conditions like OCD were treated and the gender dysphoria went away.

To summarize so far: if a young child, such as the one on National Geographic's cover, exhibits gender dysphoria, there should be a long, rigorous intervention that carefully explores and then addresses the reasons why, with the primary goal being the realignment of identity with biology, not the cover of a magazine. That's not religious nutcrackery; that's a solidly pragmatic response based on the research.

It's one thing to be a society where we allow people to view themselves as they wish and adjust their lives accordingly. I suspect that if that was all that was happening, people would agree or disagree with little fanfare. Generally speaking, most people like to 'live and let live' within the ordinary constraints of the law. The issue isn't the freedom to self-identify; the issue is whether or not everyone else should be asked - or even forced - to affirm or celebrate that self-identity.

Let's follow the idea on a logical progression. Why should our acceptance and affirmation stop with the self-identifying of gender? Why not include age or race? People like Stefoknee are identifying as a different age than they actually are (Age Dysphoria, or Age Identity Dysphoria). Others are creating a lot of tension by identifying as having an ethnic background different than their actual one.

We don't have to merely speculate on where this could take us; we can look at some people who are currently pushing the identity envelope. Some people have Body Identity Disorder; they are amputating perfectly healthy limbs because they identify as transabled. Some think they are animals (species dysphoria). Others claim to be otherkin or furries, and they are ready to be taken seriously. A Norwegian woman thinks she is a cat; another is convinced she’s a dragon (you can watch a documentary on this phenomenon here). Vinny Ohh is changing his body to match his self-perception of being a genderless alien. Some think they are vampires, and not everyone is convinced they should be told differently.  A few even think they are dead (Cotard's Syndrome).

I don’t highlight their cases to shame them. I am simply noting that they have a serious self-identification very much at odds with reality, and they are increasingly asking others to accommodate them. While the manifestation is different than someone who is transgender - someone who thinks they are dead is in a very different place indeed than someone who questions their gender identity -  the principle is the same: people believe they are something different than what their biology dictates, and they are committed to living as if their perception is true.

Let's grant that people have the right to self-identify as they wish. Let's also grant that no one should hate, mock, or belittle them. But will there ever be a time when we as individuals or a society ought to step in and say, "I'm sorry, but you are not what you think you are. And because we care, we cannot enable you." I think the obvious answer is yes (just look at the list above again). We agree that we should at some point; we disagree about whether or not that point begins with gender identity or somewhere else.