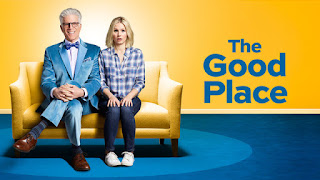 [NOTE: This review is free of spoilers. I just can't give away the ending. That means some of my comments will be cryptic, but if you've seen it, you will know what I mean.]

While muddling her way through the Good Place, Eleanor meets an eclectic mix of characters, including her true soul mate – except he was meant to be the soul mate of the real Eleanor, who is stuck in the Bad Place. There are two main plot threads running through the show: Eleanor avoiding being discovered and sent to the Bad Place, and her soul mate, Chidi, an ethics professor, trying to turn a terrible human being into a good person who belongs in the company of saints. Meanwhile, it turns out more people than just Eleanor don’t belong there. Hmmm.

Several things about The Good Place stand out to me.

First, it’s has a surprisingly good foundation of what a good and bad life look like. In flashback scenes, the show reveals episodes from characters’ lives that are hilariously terrible, so obviously bad that someone would have to be an ethical imbecile not to see the moral failure. Meanwhile, the standard of those who ‘deserve’ the good place is a laundry list of things we would all consider admirable (including the official entrance questionnaire, which is brilliant). I found it interesting, perhaps even encouraging, that those who wrote the show had a pretty firm grasp on virtues and vices, as well as what constitutes a good band.

Second, by forcing Chidi to teach Eleanor ethics, the show cleverly ties in a number of ethical theories with different situations in the story. It’s not thorough, of course, but in the midst of its entertainment it covers some solid moral ground. I was expecting a little more discussion from a Judeo-Christian perspective, but in hindsight I think that particular lack of focus was probably good. This was a parable about the good life, not a theological commentary.  As Michael Schur, the show’s creator, noted, “It’s about versions of ethical behavior, not religious salvation." [Fun fact: Schur was also the creator of Parks and Rec; this show takes place in the same universe.]

Third, this show offers a world in which free will matters, where people can choose to become a better, where moral muscle can grow and the thoughts and intents of the heart can be purified.  The season finale suggests that the way Eleanor goes about it - trying to earn her way into the Good Place through good works - might not actually be the good way. Nonetheless, even in the midst of bumbling through the futile exercise of self-willing herself towards perfection, she begins to catch a glimpse of why the good life is considered good. Slowly, her heart begins to follow her hands.

Finally, speaking of the ending, it was brilliant. I've heard it compared to Sartre's No Exit ("Hell is other people"), but it reminded me more of what it would look like if secular ethicists rebooted C.S. Lewis' The Great Divorce. The more I thought about the ending, the more it settled some questions I had during the show. It also got me to reconsider all the things that had characterized the Good Place which made quite a few things that much more hilarious (frozen yogurt – who knew?) But it also raised a sobering question: Can we ever be good enough? Will our good intentions, dutiful actions and noble consequences ever be enough to genuinely qualify us for ‘the good life’? Can we ever earn a reward of paradise on our own power?

The Good Place shows us people who want to be good – or at least avoid the consequences of being bad. They aren’t there yet, but we hope they will be. We want to see bad people become good and see good people rewarded. We turn the TV off with a little more desire for the good life and a little more disdain for the badness that permeates the world. In addition, I found myself also longing for grace. Eleanor is Sisyphus rolling a moral rock up a hill made of her own imperfections, and she is never going to make it to the top. But I want her to persevere; even more, I want someone to offer her mercy, forgiveness, and a way out of her seemingly insurmountable dilemma.

As much as I liked Season One, I hope Season Two will take us to an even better place, one where grace covers a multitude of sins - but that's going to require a different kind of Good Place than the one we've seen so far. Here's hoping!

* I try to stay focused on worldview in my reviews. For a look at more information about details within the show (if it were a movie, I am guessing it would have a PG-13 rating), check out Plugged In: The Good Place.