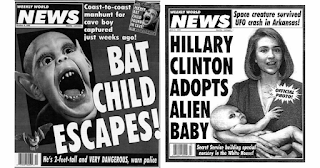 
Social media has not helped this dilemma. There is a lot of pressure to be the first to let the world know the next salacious moment, and many times the rush to break in live or be the first to go viral leads to a distortion or misrepresentation that has to be corrected three days later. TV news shows seem to be increasingly heavy on opinion and speculation and light on the facts. Why? Because a careful discussion of the facts usually bores the audience. "Are you not entertained with the latest news clip or angry panelists?!?" Perhaps broadcast news could offer something far more meaty than the current format allows if the audience desired it. Thanks, infotainment culture.

It's important to remember that legitimate news sources - organizations where trained reporters and editors take the business of journalism seriously -  are trying hard to pursue facts and tell the truth. It certainly doesn't always happen -  and then that makes the headline in news outlets everywhere else because it's a competitive industry. The New York Times' loss is the Washington Times' gain. If you get fed up with CNN, you may well end up at Fox. People get fired; retractions get printed; careers derail. In a nation with a healthy free press, there is a self-policing that takes place - not perfectly, but with general effectiveness.

The failures do not discount the successes. Perfection is a standard no news agency can reach.

If the MSM are the "watchers," independent media are often the self-appointed "watchers of the watchers." The best independent media is generally run by journalists who, for whatever reason, want to operate outside of the MSM conglomeration. They offer alternative perspectives, pursue stories that don't interest the MSM, or hold the MSM's feet to the fire when it comes to the facts of stories. Check out Alex Chrum's suggested list of good sites, or one of the many links offered by Simon Fraser University. There's a bunch more at then end of this article.

Some independent media is partisan and makes no effort to hide it. They don't merely want to pursue the facts; they want to position them. They want to place them in particular worldview and tell a particular story. I don't have a problem with this as long as it's clear going in what to expect. On the Right, there are sites like the Drudge Report, Michelle Malkin, National Review, TownHall, The Weekly Standard, The Blaze, and the Federalist. On the Left,  it's sites like Daily Kos, Daily Dot, Huffington Post, Liberal Oasis, MoveOn.org, The Nation, and Vox.

Once again, they are reporting facts, but they are positioning those facts for the reader in a particular worldview framework in a way that MSM doesn't (or shouldn't).

Somewhere on the independent media spectrum we reach a subcategory of independent media that is characterized by is a hyper-partisan presence which in its most extreme form is referred to as the alt Right or the alt Left. Posts on these sites do more than pursue and position facts; they manipulate them. When this happens, they move beyond being simply partisan and become terribly distorted or outrageously provocative. The Right has some really popular sites; on the Left, there's a pretty long list as well.

I recently read an article about another kind of internet news I will call "news mills" (for lack of a better term). One company (or person) will publish two stories that are based on the same facts but manipulate the language to cater to both ends of the political spectrum. Here's one example:


After CNN reported White House counselor Kellyanne Conway was “sidelined from television appearances,” both sites whipped up a post — and outrage — for their respective audiences. The resulting stories read like bizarro-world versions of each other — two articles with nearly identical words and tweets optimized for opposing filter bubbles... These for-the-cause sites that appeal to hardcore partisans are in fact owned by the same Florida company.

There is not an official definition for this, but there is a general understanding of what it is.

"Fake news, or hoax news, refers to false information or propaganda published under the guise of being authentic news. Fake news websites and channels push their fake news content in an attempt to mislead consumers of the content and spread misinformation via social networks and word-of-mouth. One of the more colorful definitions of fake news comes from PolitiFact: 'Fake news is made-up stuff, masterfully manipulated to look like credible journalistic reports that are easily spread online to large audiences willing to believe the fictions and spread the word.'"

Shepard Smith of Fox News put it this way:


"Fake news’ refers to stories that are created, often by entities pretending to be news organizations, solely to draw clicks and views and are based on nothing of substance."

Fake news certainly manipulates facts, but more often than not it just makes stuff up. Fake news is produced by people like Macedonian youth and bored dads in California to make a quick buck off a gullible reading population. Make what you will of the fact that this is a large and lucrative market historically dominated by the Right but increasingly catering to the Left.

So what were some of the most commonly shared 'fake news' stories recently? Here's one list of top fake news stories in 2016:
The Daily Wire gives a different list of fake news stories:
Here are the Top Five in 2016 by order of vitality (number of times shared):

Cnet.com's 120 fake news stories are a depressing list of gullibility. The Top 50 most viral fluctuate between unsettling and hilarious. Check out Melissa Zimdars' now famous list of fake websites; just keep in mind that it covers fake, satirical, and highly biased sites - a reality that is often ignored when her list is posted.

Fake news is not news you don't like. It's not news from a mainstream or independent source that is biased or sometimes wrong. Fake news is a particular kind of scam. If you shout "Fake News!" instead of  actually engaging with the facts of a story from a legitimate source, you are contributing to the death of civil, rational and respectful discourse in our country.

I once heard a wise man say, "You will either master language or be mastered by those who do." What we see now is a purposeful manipulation and distortion of language that creates a world in which people are revealing the validity of at least one postmodern critique: words are - or at least can be - power plays. Whether or not something is actually true is increasingly irrelevant. All that matters is if what you read or hear supports what you believe to be true already. If you repeat a lie enough times - or if it gets shared 10,000 times - it become truth. Or at least an alternative fact.

*That's a quote from Churchill about the importance of using deception in war. It feel apropos here.
Posted by Anthony at 8:07 AM