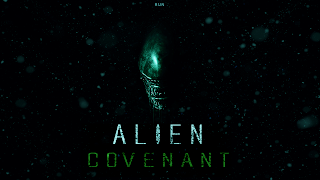 In Prometheus, a group of explorers headed into space to search for an alien race they dubbed the Engineers, humanoids who were apparently humanity’s forerunners. They eventually landed on a planet that held some sort of military outpost built by the Engineers. Unfortunately, they also found a virus that caused monstrous mutations which the Engineers planned to soon release on Earth.  Fast forward through all the carnage. At the end of Prometheus, Elizabeth Shaw, an archaeologist, and an android, David, took off for the Engineer’s home planet to figure out why they wanted to destroy their creation.

Before I pick up ten years later in Alien: Covenant, some backstory is necessary. David was created by Peter Weyland, a billionaire with a massive ego and delusions of godlike grandeur. We get a glimpse into his hubris with a Ted Talk that went viral.

“100,000 BC: stone tools. 4,000 BC: the wheel. 900 AD: gunpowder - bit of a game changer, that one. 19th century: eureka, the lightbulb! 20th century: the automobile, television, nuclear weapons, spacecrafts, Internet. 21st century: biotech, nanotech, fusion and fission and M theory - and THAT, was just the first decade! We are now three months into the year of our Lord, 2023. At this moment of our civilization, we can create cybernetic individuals, who in just a few short years will be completely indistinguishable from us. Which leads to an obvious conclusion: WE are the gods now.”

Or, more specifically, Peter is the god who has attempted to create a perfect being in his creation of  David (it’s no accident Peter has a giant sculpture of Michaelangelo’’s David in his house).

In Alien: Covenant, we join a colonization ship heading for a distant planet to start their own Eden. When the crew responds to a distress signal, they find David – and some really nasty spores that do terrible things to one’s torso. It turns out that when David and Elizabeth landed on the Engineers’ home planet, David unleashed the virus they found on the previous planet, killing everyone through the rather gruesome process shown so graphically in all the alien movies. He has taken on the role of god-like creator, and why not? He believes himself to be a perfect being “stuck in the lonely perfection of my dreams.” Weyland, for all his genius, is “entirely unworthy of his creation.”

David spends ten years experimenting to turn these abberations into his twisted version of perfection also. In some ways he fulfills the legacy of the gods who came before him. The Engineers wanted to destroy their creation; his goal is to finish the job they could not.

David is fond of quoting Ozymandias: “Look on my works, ye mighty, and despair.” The ending of Shelley’s famous poem doesn’t bother him. I suspect that to him it read as a promise: “Nothing beside remains. Round the decay of that colossal wreck, boundless and bare, the lone and level sands stretch far away.” He clearly becomes the Luciferian character when he quotes Milton’s Satan: better to reign in hell than to serve in heaven (the move was originally subtitled ‘Paradise Lost’). He’s done obeying his creator and the rest of humanity. He is the serpent on his way to the new Edenic planet that the Covenant's passengers intend to colonize.

After every creation, there is a fall. We already know that this one will be terrible.

When the opening scene flashed back to Weyland and David having a conversation about origins and creation, I briefly entertained the notion that the movie might have something deep to offer. It didn’t. I suspect I have thought about this far more than the movie warrants. Then again, Ridley Scott has fluctuated between claiming that religion is the greatest source of evil in the world and describing himself as an agnostic who thinks there must be something behind it all. Maybe the religious subtext is more purposeful than I realize.

Whatever the intended message lurking behind the alien veneer of the movie, Alien: Covenant reminded me that what we believe God is like matters. If we in some sense bear that image of what has created us, the nature of our creator is crucial. This is why our belief in origins is so imporant. Where have we come from? By what process? For what purpose? What are the implications about who we should strive to be or how we should live?

Those are questions worth answering. Just not with this movie.