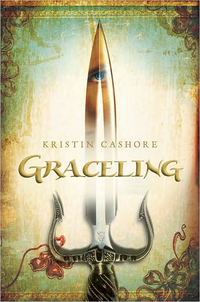 
This is not the life she would have chosen. In a sense, she does not choose to do evil; her uncle's unrelenting training and sovereign power have left her no choice.

"There was no way around what he wanted. The more Katsa did it, the better she got at it. And Randa got what he wished, for her reputation spread like a cancer...After a while she forgot about defiance. It became too difficult to imagine."

When  Graceling opens, Katsa is beginning to realize that she may have a choice after all.  In spite of all that she has been indoctrinated to believe, her life might not have to be this way.

"Katsa couldn't say where the emotion had come from, but once it pushed its way into her mind, it would not leave. What might she be capable of - if she acted of her own volition and outside Randa's domain? It was something she thought about, something to distract herself as she broke fingers for Randa and twisted men's arms from their sockets."

The idea that her Grace could be used for good and not for evil gives her a glimmer of hope.  And when Po, another gifted Graceling fighter, enters her life, a lot of things begin to change.

In a culture that tells us we are simply animals, at the mercy of blind, pitiless evolutionary forces, controlling DNA and a postmodern belief in the inescapable shackles of our community and family history, the idea that we can transcend our fate resonates soundly.  Katsa feels that war within her, the clash between who she is and who she wants to be; the contest between what fate has handed her (her Grace and the King's brutal control) and what a new-found hope has offered her.

"She knew her nature. She would recognize it if she cam face-to-face with it. It would be a blue-eyed, green-eyed monster, wolflike and snarling. A vicious beast that struck out at friends in uncontrollable rage, a killer that offered itself as the vessel of the king's fury. But then, it was a strange monster, for beneath its exterior it was frightened and sickened by its own violence. It chastised itself for its savagery. And sometimes it had no heart for violence and rebelled against it utterly. A monster that refused, sometimes, to behave like a monster. When a monster stopped behaving like a monster, did it stop being a monster? Did it become something else?"

Sometimes, we all feel like monsters.  Graceling offers a story that says we do not have to settle for how we feel, or even who we are.  History is not destiny. There is hope.

If they are not granted beauty, promiscuity can become a reluctantly chosen Grace, though it eventually reduces them to disposable toys.  How many stories have I heard of sexual humiliation and objectification?  How many conversations have I had with teens who know of no other solution than to distract themselves with dreams of freedom while their hearts, soul, and bodies are broken?

Bitterblue, a young girl Katsa must protect from sexual exploitation, says at one point, "I would like to have a Grace that allowed me to protect myself."  In a perfect world, we would all have that Grace.  In a fallen world, protection is often in short supply.

Eventually, Katsa find out her Grace is not killing, but survival. No matter how daunting the situation, she will make it through. As this dawns on her, she realizes, "My Grace is life." How is this not a compelling story?

When Katsa meets Po, she is living behind a wall built with sins of violence and mortared with despair. She plans to let know one in.  But Katsa cannot help but be honest around Po; he can sense her thoughts and moods, so everything about her is an open book. At one point Po explains his Grace: "I know every move you intend to make against me, before you make it."

This terrifies her, so she  makes a deal: Po must reveal his innermost self as well. In the end, they both find stability, comfort, and hope as they realize that,in spite of what they believed to be true about themselves, they are not too broken or frightening to be loved.

If abuse, cruelty and injustice are the problem, love and honesty are the answer.  Because Ms. Cashore does not offer a world with God, her best salvation comes through meaningful relationships. This is not true salvation, of course, but it's at least an echo of the greatest song of freedom and hope.

Oh, and it doesn't hurt that the two of them together could defeat a small army. That just might save us, too.

Katsa is terrified of what her Grace enables her to do; when Katsa asks Po, "How will I protect myself from [an evil king]?" Po promises, "My Grace will protect me from him.  And I'll protect you.  You'll be safe with me, Katsa."  I'm thinking of a promise that "My grace is sufficient for you, for my power is made perfect in your weakness." 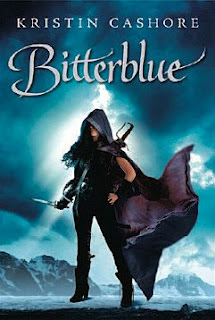 "From the very start, Katsa had an unusual power that alienated her terribly from others. As I fine-tuned the concept of Graces, it seemed right to me that every Grace should be an extreme version of skills that people in our world actually do have. So, for example, there are people in our world who can run really, really fast; the corresponding Grace would be the ability to run even faster — inhumanly fast. There are people in our world who rarely get sick, so why not a Graceling who’s incapable of getting sick? There are unusually perceptive people in our world; the corresponding Grace might be some form of mind reading. There are people with an unusually deep connection to the earth and nature; the corresponding Grace might be an ability to predict weather. And so on. I tried to avoid Graces that had too much of a sci-fi feel — for example, I don’t think teleportation would be a believable Grace in the world of Graceling. Maybe I’m wrong; basicallly, I try to avoid inconsistencies, and hope for the best!"

He is interested in marriage, but she is not. At all. Perhaps for much the same reason Katniss does not want to bring kids into a harsh world, Katsa "panicked at the thought of a baby at her breast, or clinging to her ankles."  After her experience with King Randa, Katsa understandably panics at the thought of being obligated to anyone or anything. When contemplating what to do about her attraction to Po, the book notes:

"She could not steal herself back from Randa only to give herself away again - belonging to another person, build her very being around another person. No matter how much she loved him. Katsa...understood three truths. She loved Po. She wanted Po. And she could never be anyone's but her own...Her freedom would not be her own...If it did not come from her, it was not really hers."

Katsa understands marriage, actually. It is a commitment in which one must give up control to the other in love, service, and mutual self-sacrifice.  Two freedoms become one.  Because of the damage done to her, she believes this is not an option.

She finally decides that she could be Po's lover "and still belong to herself."  The idea that maybe they shouldn't have sex if they are not ready for babies or commitment is not even considered.  Po has a contraceptive medicine, so all will be well.  Once again, it's a pragmatic decision, but not a wise one.

Are they loyal, kind, and self-sacrificial? Yes, and nobly so. But you can't be a true lover and still belong to yourself.  Po and Katsa want to bare skin and soul without commitment and consequence; they want to be "one" without undergoing that final,risky, crucial step of servanthood and obligation.That's not a helpful message to send in a society that is reaping a very bleak harvest from irresponsibility and promiscuity.

FOR WHAT IT'S WORTH