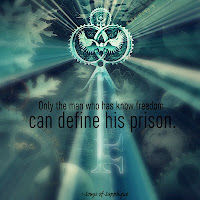 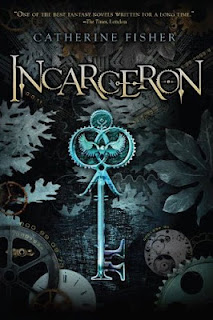 Finn is one of the Children of Incarceron, cell-born, patched together by the Prison itself from the very fabric of this suffocating world. The Prison was his father and mother, the thing to which he prayed and begged to end the nightmare of nothingness.

Claudia is a daughter of the Realm, born into wealth and privilege in a world built on lies. She is also the daughter of John Arlex, Warden of Incarceron.

Sapphique is the mysterious legend who found the key - and the way out. Unfortunately, he did not return. 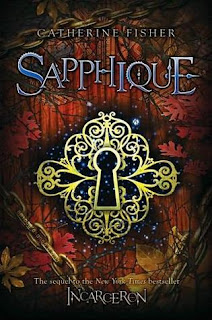 Ms. Fischer has taken on a series of crucial worldview questions in this two-part series: What does it mean to be human? Can we overcome our history? Are we free, or does our nature determine what we become? And can we ever be free of our prisons?

The Warden once wrote to the Queen of the Realm,


“The world is a chessboard, madam, on which we play our ploys and follies…Do we move ourselves, do you think, or does a great gloved hand place us on our squares?"

In many ways, it would seem the Warden's question is also the answer. Perhaps, like the Sapient Jared claims,“the Prison is in us.” Perhaps so. Perhaps there are worse prisons than Incarceron.  Physical prisons are difficult to escape; how much more the prisons of our own nature?

“Is it that man contains within himself the seeds of evil? That even if he is placed in a paradise perfectly formed for him he will poison it, slowly, with his own jealousies and desires? I fear it may be that we blame the Prison for our own corruption.”

This is the story of Genesis and the Garden retold (as some of the imagery in the book makes very clear).  We live in a jungle that used to be a Garden. We are not naturally prone to good; there is that within us the subverts every good thing. Even the prison understands this.

“[People] torment each other. There is no system that can stop that, no place that can wall out evil, because men bring it in with them, even in the children...”

This is a world in need of a savior.

According to the Three Without Mercy, the Implacable Ones,“We are all criminals here. We are all guilty.  Even Sapphique, who Escaped, had to pay the debt to Incarceron.” Kiero, a friend of Finn, is the physical manifestation of a spiritual reality effecting them all. His human body is so intertwined with Incarceron's parts  that it’s difficult to see how he could possibly escape.

Incarceron offers to let Kiero know how much“is flesh and blood, how much of you belongs to me.” When Kiero responds that he already knows, Incarceron answers,  “No, you don't. None of you know. To find out you must open up your heart, and die.”They are all corrupted and trapped by more than their circumstances; they are all condemned by their nature.

But in a world that seems hopeless, the legend of Sapphique offers a hope for which the people long:

Sapphique had once offered himself as a tribute to the Beast in Incarceron in place of another.  Like another savior, he "died" for three days before returning. Unfortunately, he is not that kind of savior, and “there is not enough of me to pay the debt.”  At best, he can offer a temporary respite from the imprisonment of Incarceron. The Realm itself offers its own kind of hell.  “Escape is not enough. It does not answer the questions. It is not Freedom.”

Sapphique saved himself; others he cannot save.  The people long for freedom, but their hearts have become jaded by reality.  When Finn escapes and promised to return, Attia waits three days.  When he does not return on the fourth, she decides Finn is just another failed hope.  He appears in her dreams (“I haven’t forgotten you, Attia. I’m coming back for you”).  In her dreams she responds,“Liar.”

But Finn is not Sapphique.  Finn is actually a child of the Realm, cast into Incarceron where he took upon himself the form of a Cell Born. He is of the Realm and of the Prison, and he knows a way that transcends them both.  Even the Warden sees in him a hope not found in Sapphique:

“Don’t forget us, Finn. Don’t forget the ones back there in the dark, the hungry and the broken, the murderers and thugs. There are prisons within prisons, and they inhabit the deepest. The Realm needs its King. Someone who’s seen outside the Palace and the Protocol.  Someone who has been right down into the depths. Isn’t that what you want too? Someone who can end the misery of Incarceron because he knows what it’s like?”

Finn  eventually returns, bringing with him a promise of freedom for all who are in prison.  It’s a story I’ve heard before, but each retelling reminds me of the hope that a true Savior brings to the world.