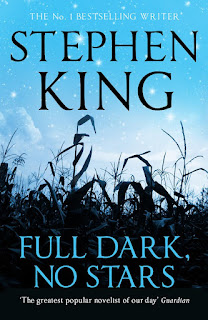 1) In spite of King’s claims, I don’t see the hope he says these stories contain. In this collection, the most one can hope for is  a quick death, vengeance and insanity, or a destructive deal with the devil.  The bonus story, “Under the Weather,” is a remarkably bleak story of insanity and hopelessness. The one exception is “A Good Marriage,” which ends with a character saying, “You did the right thing,” followed shortly thereafter by the happiest sentence in the book: “She felt younger, lighter.”
2)  There is no forgiveness or reconciliation with others or within.  In Full Dark's worlds, cause and effect work with remarkable efficiency – people definitely reap what they sow.  Even if evil is stopped, those who remain appear to be inescapably stuck – emotionally, psychologically, relationally – in the brutal aftermath.  Only in “A Good Marriage” do we find even a glimpse of the possibility of truly moving on and being able to put the past behind us.
3)  These stories are set in worlds in which friendship/community is absent.  People live in geographical or personal isolation, or they are surrounded by people who may help them but won’t befriend them.  Only in “A Good Marriage” do we find an exception, but even that is fleeting.
4)  The moral landscape in these stories are stark (and, I might add, mostly correct), but ultimately without foundation.  We can read this collection and agree that the evil portrayed is truly evil but…..why?   Though King is a professing Christian, God plays no role in these stories, though the devil and superstition get some ink.  Without an objective basis for gauging the (im)morality of the characters’ actions,  why are these things evil?  I can think of good pragmatic, utilitarian reasons that the actions of the protagonist in “1922” ought to be morally acceptable.  I can conceive of how evolutionary morality could justify the actions of both the antagonist and protagonist in “Big Driver.”  The actions of the protagonist in “Fair Extension” are just wrong on so many levels, but Neitzsche would call him an uberman.  The instincts of the protagonist in “Under the Weather” make sense as a survival mechanism.

As a Christian, I don't think any of the reasons I just gave have merit.  I reach this conclusion not because the stories themselves contain a bedrock of morality, but because I bring a moral vision to them.  Unlike Dean Koontz, King is content to let the reader bring the worldview to the story. I'm not sure that's always a good thing.
“A Good Marriage”  is the one story where there is a sense of hope, a sense that an evil was stopped.  Justice was achieved without vengeance, and those who remain move on with their lives.  It is the only one where the God of the Bible is  mentioned, specifically with the idea that there will be justice in the next life.
If I read these stories correctly, King places a premium on friendships; believes justice ought to be served; finds the exploitation of people deplorable; and thinks the lustful, greedy, self-centered, violent “second self” within us all will destroy us and those around us.  If there is hope to be found, it will come from genuinely good people, true justice, self-sacrifice, and the repression of the evil within us.
I admire King's laudable desire to write honestly, but creating a world without God is creating a world that refuses to “tell stories about what people actually do”; i.e.,  rely on a God who interacts with the world.  It also is a world which refuses to shine the brightest light of all into the dark places.
Even the darkest night has stars.

(I first posted a version of this review at TC Apologetics)
Posted by Anthony at 6:40 AM