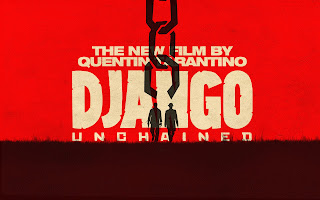 
In Django Unchained, there really are no moral struggles taking place within the hearts of the key players. You have to fight something in order for there to be a battle. Schultz, Django, and the slavers all seem to agree: the ends justify the means. Some ends are clearly better than others (freeing your wife vs. owning slaves - any disagreement here?) but none of the main characters have any qualms about fully entering into the evil within and around them in order to achieve their goals.

Schultz is a cold-blooded killer who admits he is the moral equivalent of a slave trader – and we are supposed to cheer him as a good guy. If anyone deserves moral kudos, it's Django and his wife, if only because they are the victims and not the perpetrators. Given the chance, though, Django has no qualms about teaming up with a heartless bounty hunter.

A part of me gets it: in a world without justice or mercy, Django's options are limited. But while his cause may be just, his methods are suspect at best.  When he utters the instantly iconic “I like the way you die, boy!” it's an understandable sentiment.  That does not make it less tragically brutal.

Django Unchained ended with the hope of a new life for Django and his wife. That was a welcome conclusion. But whenever people pursue revenge rather than justice, they cannot help but enter into darkness. Yes, the world is full of ethical dilemmas, but both the ends and the means matter. When a clever, talented director makes a film that inclines us to cheer for blood-splattered revenge, even the audience enters into a darkness that goes beyond the dimming of theater lights. By the time the credits rolled, the only light that shone into the midnight of moral nihilism was the light flickering from a burning mansion.

I will give Anthony Lane at the New Yorker the last word on Tarantino:


"His films continue to be snared in a tangle of morality and style. Tarantino is dangerously in love with the look of evil, and all he can counter it with is cool—not strength of purpose, let alone goodness of heart, but simple comeuppance, issued with merciless panache."