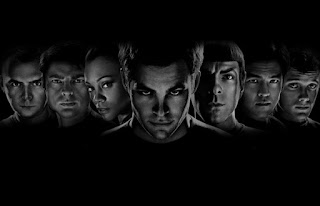 To answer this question, Star Trek contrasts three forms of ethics: deontological (duty-centered)ethics;  virtue (character-centered)ethics (through Kirk); and consequentialist (outcome-centered) ethics. Spock is clearly utilitarian at times in this movie, but he also stresses the important of law, commitment and duty. He is the face of a logical, dispassionate approach to morality. Kirk is the face of virtue ethics:

It may, initially, be identified as the one that emphasizes the virtues, or moral character, in contrast to the approach which emphasizes duties or rules (deontology) or that which emphasizes the consequences of actions (consequentialism). Suppose it is obvious that someone in need should be helped. A utilitarian will point to the fact that the consequences of doing so will maximize well-being, a deontologist to the fact that, in doing so the agent will be acting in accordance with a moral rule such as “Do unto others as you would be done by” and a virtue ethicist to the fact that helping the person would be charitable or benevolent.

It’s not a perfect  moral theory, but a simultaneous recognition of duty, consequence and virtue can provide a healthy framework in which to pursue the good.

Near the end of Heart of Darkness, Conrad wrote:

Since I had peeped over the edge myself, I understand better the meaning of his stare, that could not see the flame of the candle, but was wide enough to embrace the whole universe, piercing enough to penetrate all the hearts that beat in the darkness. He had summed up — he had judged. 'The horror!' He was a remarkable man. After all, this was the expression of some sort of belief; it had candor, it had conviction, it had a vibrating note of revolt in its whisper, it had the appalling face of a glimpsed truth — the strange commingling of desire and hate.

This is not the conclusion of the matter in J.J. Abram’s retelling. Kirk manages to boldly go where Conrad's characters have never gone before – back into the light. Heart of Darkness warns us of the evil lurking in our hearts; Abram's movie encourages us that we can go into moral darkness and still return. Kirk and his companions might not be fully in the sun, but there is something to be said for moving out of the darkness.
Posted by Anthony at 4:17 AM