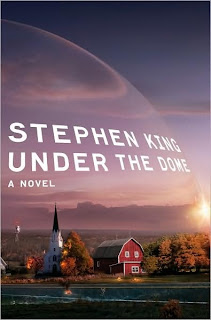 
As Episode 5 unfolds, the town plunges into chaos. When push comes to shove, most people tend to do exactly that to get their way. The townspeople need water, food and insulin, and they are willing to justify any means to achieve their desired ends. Those who aren't that brutally pragmatic are too few to make a difference. Flannery O'Conner was right: good people are hard to find, and in Stephen King's world they are more sparse than usual.

"A man without a sense of purpose, even one whose bank accounts are stuffed with money, is always a small man."


Episode 4 highlighted an interesting subplot. One of the characters is a girl raised by two lesbian mothers. Her biological mom told her that her father was simply a sperm donor, but that wasn't true at all. On Visitors Day, he shows up on the other side of the dome.

It's not a great way to find out you have a father; then again, would any day have been good? "I hate you," she tells her mother, who cannot offer an adequate defense for her duplicity. When a friend attempts to console her, she also expresses her hatred toward a father who barely deserved the title.

It's a gutsy, emotional look at a PC topic. It's one thing to debate the issue of same-sex marriage and parenting; it's quite another to take an honest look at how the decision of adults effect their kids. In Episode 5, it's clear she cares deeply for her mother. I don't think this is meant to be a commentary on the morality of same-sex relationships, because this type of anger could apply in any situation where a child feels betrayed/and or abandoned by parents who fail to think through the consequences of their decisions.  The handling of the issue does, however, capture the tension between love and anger in a way that is much closer to how life really works then most TV shows and movies capture.

"Sometimes when people are on their own, they do things they regret later, usually when the investigations start."

It's getting ugly in Chester's Mill, and there might not be investigations - ever.  Once there is a breech in the dam of regrettable things, it's tough to avoid the flood. And since it's Stephen King, there will be a flood.
Posted by Anthony at 8:39 AM