This review will look at Wings, the debut YA novel by Aprilynne Pike (it's Book One of a series).  It's an international bestseller that's been printed in 28 languages.  The critics seem to love it and the general population clearly likes it, thought there are some humorous and outspoken exceptions. As is increasingly the case with popular YA fiction, a movie is in the works (Disney is trying to bring this to a theater near you, with Hannah Montana Miley Cyrus in the lead. Perhaps she will sing "Party in Avalon." 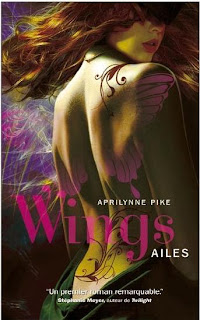 Unlike many of the heroines in current teen fiction, life has been good to Laurel. Yes, she was abandoned as a baby (someone set her on her parent’s doorstep in a basket when she was three), but her soon-to-be mom and dad don’t miss a beat. They home school her until her junior year, attend church regularly, adapt to her odd eating habits (she basically subsists on Sprite), and remain firmly in love with each other. As far as YA stories go, Wings provides a strong portrayal of what a stable home looks like.

When she moves to a new town, her parents send her to a public school where “being lost and scared was something you got used to.” There she meets David, who resonates with her abandonment as a child. His dad, a big-time lawyer who left his family for a different life, flies in every couple months and takes David away for the weekend. It’s just an obligatory gesture, and David knows it.

Everything changes when Laurel's flower petal wings begin to unfurl. Another part of reality has been waiting, hidden and anxious, for this moment. She begins to see into another world, into a mythic landscape where a warrior named Tamani who tells her who – or what – she really is:

“Am I turning into a flower?”
“No... you’ve always been a flower. You’re a plant… Not just any kind of plant, of course. The most highly evolved form of nature in the world… Laurel, you’re a faerie.”

Tamani is strong, handsome, and dedicated to protecting her from some encroaching trolls disguised as greedy businessmen. His charisma is bolstered by an unexpected revelation: Laurel was once a grown faerie who agreed to be planted in the human world. Before the faeries made her appear young and erased her memory, Tamani was more than a friend - and apparently one with benefits. Now he’s been watching her for years as she grows up in human terms, always in love, always wanting to rekindle what they once had.  Always wanting to take her home. Always.*

The arrival of Tamani threatens to leave David stuck and forgotten in the land of mortals. But David know how to fight for what he loves as well, and he offers to Laurel what his own father never offered to him:

“Whatever you need, I’ll be. If you need the science geek to give you answers from the textbook, I’m your guy. If you just want a friend to sit by you in bio and help you feel better when you are sad, I’m still you’re guy… And if you need someone to hold you and protect you from anyone in the world who might want to hurt you, then I am definitely your guy.”

Wings might be about the search for identity, about embracing the things that make you unique. Laurel is a plant. That's a problem. Fortunately, she has a strong family and good friends who help her navigate the dangers of growing up fae in a human world.
Wings might be about a young girl’s budding sexuality and maturity. Tamani explains that faeries reproduce when the male puts pollen into the female's petals. It's important, but merely mechanical. “Pollination is for reproduction – sex is just for fun.” Laurel realizes that, because she is a faerie, she can’t get pregnant through sex. “Sex for her was just sex, with no strings attached.” 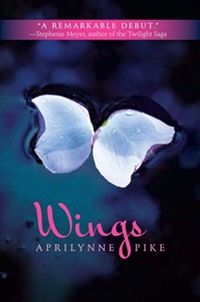 The book is not clear, but it seemed as if this was supposed to be one more thing that made the faerie world appealing.  Sex with no obligation, commitment or consequence. Pleasure without responsibility. That's truly a sort of fairy tale, at least in the sense that it's not true. A lot of broken-hearted people desperately wanted to believe that particular fable. It's not a great message to send teens.

Wings might be a parable that reminds us that reality cannot be reduced to science and logic. As David notes:

“There’s always someone who secretly believes in myths and legends; or at least parts of them. Those are the people who will look beyond the obvious and see things in this world that are truly wonderful… But they won’t say anything, even if they do. Because the rest of us who view the world as logical ad scientific wouldn’t see the truth if it was posted on a billboard.”

Wings might be a coming-of-age story that looks at growing up, embracing who we are, and coming to grips with the dual nature of an identity that might make us or break us. At one point David and Laurel talk about the implication of Laurel's being known as she truly is:


“Have you…told our parents?”
Laurel shook her head.
“Are you going to?”
She shook her head again.
“I think you should.”
Laurel swallowed hard. “I’ve been thinking about that since I woke up…If you were a parent and your kid told you she had a giant flower growing out of her back, what would you do?”

I don't know, honestly. Wings might have been any one of them, or some, or none. I'm not entirely sure what to do with this book. Mrs. Pike seems like a great person; her bio on her website makes it tough to criticize her. But in this case, I need to separate my hope that she achieves her full potential as a writer from some uneasiness I have with this particular book.

On the one hand, I liked the creativity and the overall decency of the characters. On the other hand, the story felt very vague. There are some stories that can be read multiple ways because they are deeply layered with insight and wisdom. I listed all the different ways Wings could be read because I can't find the core reason this book blossomed from the author. It's one thing to plant a story in the minds of readers; it's quite another to nourish it and bring it to life.

*Tamani has been watching her all her human life just waiting for her to grow up. It was an uncomfortable revelation to say the least. An adult dude has been hanging out in the forest around the house since she was a baby, wanting to take her home and, uh,  make a life with her. That's a story plot waiting for Liam Neeson to make an appearance.