Dying To Be Entertained (The Hunger Games And Philosophy)

In the opening section, Brian McDonald (“The Final Word On Entertainment”) and Anne Torkelson (“Somewhere Between Hair Ribbons and Rainbows”) look at the power of the arts to shape both individuals and cultures. 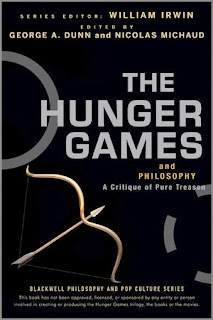 McDonald begins with Aristotle’s claim that art is mimeses, imitation, intended to “delight and instruct.” Artists accomplish this by showing the most noble aspects of life within the boundaries of the Golden Mean:

"At the right times, about the right things, towards the right people, for the right end, and in the right way, is the intermediate and best condition, and this is proper to virtue."

Art that does not elevate the soul in this fashion is merely empty spectacle. Those who wish to entertain should not seek to be innovative envelope-pushers, good art won’t promote extremes. Virtues such as bravery are destroyed by deficiencies (cowardice) or excesses (rashness) in real life.

Socrates claimed that the music we absorb shapes the souls of individuals, cultures, and even the laws of the city. Mousike, the realm of the Muses, is so powerful that the government needs to make sure it exhibits mimesis, celebrating and promoting all that is known to be good. Assuming the city is just, imitative music will nourish the soul of both the people and the culture; conversely, innovative, envelope-puushing music in a good society will almost necessarily corrupt it. McDonald quotes cultural critic Philip Reiff's blunt assessment of the situation:

“Every true culture expresses and celebrates the power of re-creation [mimesis].”

If Reiff is correct, false cultures are those that de-create the good through extreme innovation detached from historical moral norms. Herein lies the problem with the Capital. The city clearly lives, promotes, and is entertained by a life of extremes. The Hunger Games are perhaps a logical culmination of this sickness.


Reiff believes a lot of the modern arts participate in a movement toward de-creation rather than creation. The quest for creativity and innovation has trampled the moral, cultural and religious norms of society (a recent VMA concert comes to mind). The problem is not so much that art is attempting to be fresh but that it is purposefully attempting to undermine that which is virtuous.

Rieff claims that our sense of identity comes from our grounding in the moral and social norms of fixed communities - when we know where we have come from, we see our place in the story of life. When art de-creates a community by destabilizing its history, morality and customs, it destabilizes individuals. People don’t know who they are or ought to be. This loss of identity results in a destabilization of those who are existentially lost. When identity is gone, bad things happen. McDonald applies these theories to Panem:


“Art has abandoned mimesis in favor of a monstrous attempt at self-originating and self-referencing power. The motto of art, ethics and politics becomes ‘I can do it, so I will do it.’ The will to imitate has been replaced by the will to power.”

Is it any wonder that the Capital is saturated in violence? The citizens of the capital have no way to gauge what healthy, stabilizing moral community looks like. All that's left is power, and the ever present screen projects glittering, false stories to a steadily decaying culture. The late Neil Postman wrote in Amusing Ourselves To Death:

Katniss recognizes that neither the entertainment nor the life of the Capital represents how the world ought to be staged. She ultimately rejects Gale, who is ready to imitate the destructive stories of the Capital, and chooses Peeta, the artist. They choose a life of mimesis, imitating and recreating virtuous patterns of nature, family, and stability.

Most of the series shows what happens when arts and entertainment destroy a society; here we begin to see a slow rebuilding. Artists who challenge a corrupted status quo can divert people back toward virtues (think of protest songs during civil rights movements, or novels such as Gulliver’s Travels). Perhaps now the very tools that brought a culture to despair can be used to reclaim the high ground.

MacDonald claims that, through Peeta, Katniss can be "delivered from the monster she now knows she has become.” As far as imitative saviors go, Peeta has some good things to offer. He can't resurrect all that is dead in Katniss - he's not that kind of Savior - but even skillful representations of the goodness of the world can begin a slow reconstruction of that which is actually good.

Up Next: "What if the Odds Aren't in Your Favor?"

Recommended Reviews of The Hunger Games:

Deeper Hungers and Darker Games- my thoughts on the series
Christian Reflection on the Hunger Games Trilogy - very thorough post from J.W. Wartick
Book Review: The Hunger Games Trilogy - good overview and perspective of the series as literature
Blood-Stained Ink has a three-part series worth reading
From Emily Torres' Dystopia Ministries - a series of short articles on how our culture is intersecting with the Capital.
Posted by Anthony at 7:28 AM